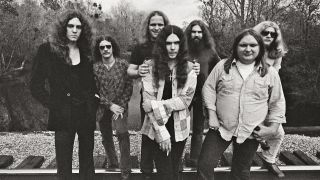 In art, as in life, some things are not always what they seem. So it is with the song that gave Lynyrd Skynyrd a US Top 30 hit in 1975.

The song in question has always been perceived as an anti-gun protest song. Actually it’s more complicated, more nuanced than that.

Saturday Night Special was a protest song with a caveat. In the words written and sung by Ronnie Van Zant, the leading figure in the band’s first great era, there was a question that went to the heart of America’s gun culture: ‘Why don’t we dump ’em, people, to the bottom of the sea?’ But the truth was that Ronnie Van Zant was no anti-gun campaigner.

On the contrary, at the time when he wrote the song he owned a .22 calibre pistol. He used it when hunting for rabbits and squirrels in the woods around the band’s home town of Jacksonville, Florida. What Ronnie was advocating in the song was greater control of illegal handguns – specifically a type of gun that was freely available on the black market in 1970s America, and could be bought for as little as 20 dollars; a gun commonly known as a Saturday Night Special. As Ronnie stated in the song’s chorus: ‘Mister Saturday Night Special, got a barrel that’s blue and cold/Ain’t good for nothin’, but put a man six feet in the hole.’

Forty years after Saturday Night Special was released, and 38 years since the plane crash that killed Ronnie and five other members of Skynyrd and their entourage, only one member of the seven-man line-up that recorded this song remains in the band: guitarist and co-founder Gary Rossington. Guitarist Allen Collins, bassist Leon Wilkeson and keyboard player Billy Powell have passed away. Drummer Artimus Pyle left the band in 1991. Ed King, the guitarist who wrote the music for Saturday Night Special, left for the second and final time in 1996.

For Rossington, Saturday Night Special is one of the definitive Skynyrd songs. “One of our very best,” he says. For Johnny Van Zant, Ronnie’s kid brother, who became Skynyrd’s singer when the band reunited in 1987, it’s a song both prophetic and poetic.

“Ronnie was a poet for common people,” Johnny says. “God gave him a gift to preach to people. People listened. And what he said in this song, his foresight was right on.”

Saturday Night Special was written in the summer of 1974, while Skynyrd were on tour in the US. Ed King had a heavy, staccato riff that he played for Ronnie one day. It sounded, in Rossington’s words, “real mean and ominous”. Ronnie wrote a lyric to match, featuring chilling vignettes in which sexual betrayal and drunken gambling led to fatal shootings. “It was a strong message that Ronnie was conveying,” Rossington says. “Those cheap handguns were no good for hunting or anything else – they were just made to kill people. And those guns were easy to find. We came from a rough part of town, the west side of Jacksonville. There were a lot of bad people there, and every week you’d hear that somebody got shot or killed.”

Once the song was written, the band recorded it immediately at the behest of their record company MCA. That summer, Skynyrd had notched up a Top 10 hit with Sweet Home Alabama, and label execs were keen to cash in on that success. Saturday Night Special was recorded quickly so it could be included in the soundtrack to the 1974 film The Longest Yard, a comedy about a prison football team, starring Burt Reynolds.

The track was recorded in a single day, between gigs, at Studio 1 in Doraville, Georgia, where Skynyrd had made their first two albums. It was their first recording with drummer Artimus Pyle, who had recently joined the group in place of Bob Burns.

“That was exciting,” Rossington says, “to have this new blood in the band. And we sure as hell didn’t waste any time cutting that song. It was more or less done live, with just a few overdubs for the lead guitars and vocals. That’s the way everybody recorded in those days.”

According to Rossington, all of the group were more or less straight while they were working on the track. Skynyrd had a well-earned reputation as a hard-drinking, hard-partying band, but in the studio they reined it in a little.

“We worked hard,” Rossington says. “You couldn’t really get drunk in the studio because you couldn’t perform. You’d get sloppy. There was a lot of stuff going on in those days – drugs and alcohol – but not to the extent that it really showed on the records.”

What Skynyrd created with Saturday Night Special was a track as heavy in its sound as in its lyrics. Much of its force came from Artimus Pyle. “I was hittin’ that snare as hard as I could,” the drummer later recalled. The three guitarists – Rossington, King and Collins – played off each other brilliantly. But it was Ronnie Van Zant, more than anybody else, who made it so powerful, with what he said and the way he said it. There were no histrionics. That was never his style. But in his measured delivery was the cool authority of a man who always spoke the truth as he saw it.

Saturday Night Special was released as a single in May 1975, nine months after it was recorded. It was the lead track on Skynyrd’s third album, Nuthin’ Fancy, released two months previously. Many years later it would also feature in the 2005 remake of The Longest Yard, in which Adam Sandler took the Burt Reynolds role, and Reynolds himself played a different, older character.

Lynyrd Skynyrd still play Saturday Night Special at almost every live show. “It’s a song that we all love,” Johnny Van Zant says. “And I think it’s more relevant now than when Ronnie wrote it. When I was just a kid, growing up, we always had guns around our house. My family, we were hunters. But handguns scare me because I know there’s only one thing they’re gonna be used for.

“Every time I sing Saturday Night Special,” Johnny adds, “I feel the power in those words that Ronnie wrote. There are too many guns in America. My brother knew what he was talking about.”

GIVE ME BACK MY BULLETS

In 2015, the issue of gun control has once again been debated across the US in the wake of shooting tragedies in** **Oregon and Tennessee. For Gary Rossington and Johnny Van Zant, like many Americans, the subject of gun control is a complex issue.

“I’ve got guns myself,” Van Zant says. “I live in the swamps of Florida, there are water moccasins and rattlesnakes around, and I want to kill those things if they’re on my land. And if somebody breaks into your home at four in the morning, you want to be able to protect your family. So I own a Winchester rifle, and I’m not giving that up, you know?

“But what’s going on in America with all these shootings is so terrible. Believe me, I have kids and grandkids, so I worry about it every day. The bottom line is I would like to see more rules on owning guns. People could still get them underground, man. But you gotta start somewhere.”