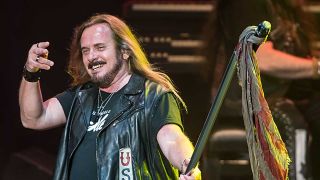 Very few understand the music of the south as well as Lynyrd Skynyrd frontman Johnny Van Zant. From bluesy shit-kickers to ghostly ballads, this is the soundtrack to his life.

"This was an old rhythm and blues number about a hero who saves women – 'Jim Dandy to the rescue!' – but Black Oak Arkansas made it into a southern rock song. They played heavy, yet they still had that roosty, bluesy thing too. And of course their singer was also named Jim Dandy. He was a real character. I betcha David Lee Roth was a fan."

"Wet Willie’s sound had a southern rock feel to it, but there was a lot of jazz and blues in there too. Keep On Smilin’ was one of their big hits. I’d recommend the live version – it’s got a little more soul to it."

"The first time I saw these guys play live, I thought: 'Wow, this is unique.' They were like a freakin’ jazz blues country thing – there was even some flute playing going on. Fire On The Mountain is an awesome song, and Doug Gray just sings the crap out of it. Marshall Tucker Band were always very cool – and they still are."

"I don’t know a lot about the band, but I always loved the chorus in this song: 'Third-rate romance/Low-rent rendezvous.' It had a really cool country feel. A lot of the old southern rock bands would be considered country today. Likewise you’ve got country stars now like Jason Aldean who’s basically just a southern rock guy."

"Black Betty was based on an old American folk song. The band wasn’t from the south, but they sounded southern. I dug everything about this song – the riff and the beat and the whole vibe. I had this on a seven-inch single and I played the shit out of it."

"They were from Doraville, Georgia – a real happening place back in the 70s. Champagne Jam is one of the coolest songs from that era. Their singer, Ronnie Hammond, was a good southern man and had such a unique voice. It’s a shame he’s gone."

"Henry Paul is a unique singer, and Grey Ghost is a beautiful song. It was dedicated to my brother, Ronnie. Everybody always looked to Ronnie as being like a Confederate general – the Grey Ghost. Hearing this song brings back some good memories."

"Gregg Allman put out some awesome solo albums in his career. I’m No Angel was a great record and the title track is the best song on it. I remember as a young guy going to this place in Jacksonville, a bring- your-own-bottle club. And the Allman band would play there. Gregg Allman just thrilled me with that voice. He was one of a kind."

Georgia Satellites  – Keep Your Hands To Yourself

"When I saw the video for this song on MTV, I said: 'Wow, that’s cool – they’re playing a southern band.' They had this attitude. The singer, Dan Baird, and the guitar player, Rick Richards, were so cool. When I listen to this song it kind of reminds me of Down South Jukin’ by Skynyrd."

"Gov’t Mule is like the Allman Brothers meets... God, I don’t know what! Bad Little Doggie has a really cool southern rock feel. Warren Haynes is a great guitar player. He can play anything. Skynyrd did some shows with the Allmans in 2012, and watching Warren play every night was such a pleasure. I just love what he does."