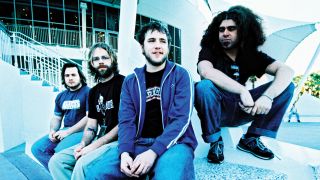 It Was Written At Mom’s House

“The song was written when I was still living in my parents’ house! I was still working a normal 9-5 job, so being in Coheed wasn’t a full-time thing. We had just signed to Columbia so it was becoming that, but I was living in their downstairs area. I remember getting the riff and then moving into the chord progression, and being so excited… then my mother walked in to do the laundry! I was in my boxers and she’d caught me in this heightened creative moment. It was pretty embarrassing.”

We Channelled The Greats

“The riff reminded me of a cross between Tool and Zeppelin. There was something about the intricate minor intro that gave me a sense of the creakiness of Tool but the chord progression of Led Zeppelin and it had me so pumped. I was immediately very excited about it. When we went into the studio we could hear the Zeppelin influence – and there are a lot of homages on that record. You know we used to call The Suffering ‘the Thin Lizzy one’ and Mother May I ‘The Police’? So we just thought there was no point trying to hide that stuff!”

It Created A Lot Of Emotion

“When it came to tracking the song we wanted it to be as complex and challenging as we felt the subject material was. It’s a song that came out of, what I thought was, the end of a relationship with a woman who is now my wife. There were a lot of ups and downs, and that whole record is a kind of perplexing love letter, and with Welcome Home, we wanted to reflect that. So I tracked all these vocal tracks that don’t necessarily match up. I wanted it to feel like all these different voices. All these parts of my personality. Like, multiple personalities singing the same thing. It’s kind of jarring!”

We Knew It Was A Single

“When it came to promoting the album it was definitely the song we thought should be the flagship for the record. But the label weren’t so keen! It was kind of given treatment as the soft single, and there wasn’t a lot put behind it. They didn’t see us as ‘that band’, and they thought The Suffering would be the first single. But the band all thought that this was the song that best represented us, and it proved itself, because every once in a while, even to this day, it pops up on something.”

It Had To Be Long

“The whole record is about love, and I’m often transported back to those moments when I wrote it when we revisit those songs. And love is a confusing thing, so I can see why people would want to write a three-minute song that really gets their point across. But for me it couldn’t encapsulate that, those odd feelings when you separate from someone or the euphoria you feel when you connect to someone. I just don’t feel that stuff can get expressed in such a short length of time, so we needed to explore it to the fullest.”

It Still Feels Good To Play

“I enjoy playing the song, especially at the start of the set like we are at the moment in doing Good Apollo… in full. I still love the song, even though it was about a bad time in my life. It’s a horrible, mean-spirited song, but it is what is! I mean, we’re married now, so it’s fine!”

The Story Behind The Song: Alter Bridge's Metalingus

The story behind the song: We Will Rise by Arch Enemy