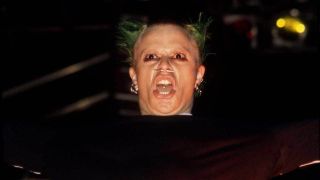 “Well for me and the crew, we saw the finished video and thought it was funny. To us it was like comedy,” laughs Jonas Akerlund, remembering the media storm he found himself in back in 1997. His career ranges from drumming in Bathory to directing videos by Beyonce, but he still can’t escape being the guy who directed and conceived The Prodigy’s notorious Smack My Bitch Up Video. Even today, he’s not quite sure of why the controversy arose. “Maybe it’s because we are from Sweden and we are a little different over there, but I couldn’t see the controversial part of it. I mean I see it now, especially now living in America I get it. Even now when I go back to Sweden and see a naked person on the TV I go ‘Oh! A naked person!’ and then I realise I’ve been living too long in America. It was a ride, I said ‘Let’s go on a ride!’ and that’s what the video was. It might not be everyone’s idea of fun, you know fighting and shooting up, but…”

He shrugs the shrug of a man that has come to terms with being ‘that guy’. But it’s only a quirk of fate that we are even here talking at all today, all stemming from one crazy night out.

“Yeah, well that was my first video,” he recalls. “I’d done a few things in Sweden but this was my first outside of the country and obviously The Prodigy were a real big deal back then, so I was very nervous. I couldn’t really figure out the idea, so I passed on it. I said ‘I don’t know what to do with you guys, sorry’ but then that night I went out with a friend in Copenhagen and we were out, you know really out, and I woke up in a hotel room and all I could really remember was my foot kicking a door in of a toilet cubicle and there was a guy taking a shit. So my friend filled me in and told me that we’d done all this crazy stuff and gone to this strip club, so I decided to do the video of a party night inspired by that night. And in the end you make it a girl because of the lyrics. I sent them a fax and it was half a page treatment and they were nervous, they were super nervous, they told me that I couldn’t have all these things in it.”

For people that have seen the video you’d wonder what else could be added, but apparently there was more… much more.

“There was to be no beatings,” Jonas continues. “There’s a scene in the director’s cut where she hits this girl with a bottle and they were like ‘You can’t do these things! It’s too much!’ They pressured me so much to get an edit to them quickly, this was in the days before the internet so I had to send them a VHS of my first edit, and I got a fax from the band’s manager saying ‘We don’t like the video, stop working on it.’ And I thought ‘Oh well, there goes my three seconds of fame in the music video making world in England!’ but I continued to work on it and finish it. Because I really liked the idea.”

How easily the story could have ended there…

“So we finished it,” Jonas tells us, “and I sent Liam from the band the finished video with a little note saying ‘Here’s what I was trying to do’. And, about a month later, just as a coincidence his girlfriend found it and popped it in the video recorder. He called me right away saying ‘Okay, we’ve changed our minds. We love it!’ The next day they opened some big festival with the video and it just took off. So the video was never really meant to happen, it was just a series of coincidences that led it that way.”

Which, really, is where the story of Smack My Bitch Up just begins. Jonas had just directed one of the most contentious videos in music history. A video that outraged the moral majority on both sides of the pond.

“And then of course there was all the controversy,” sighs Jonas. “When I moved to America Jay Leno was doing a Smack My Bitch Up joke every night for a week and I was like ‘Holy shit!’ This is an English band playing dance music, and using the word bitch, which now is nothing but it was interesting to me to see the different perspectives – in England they were really angry because of the violence and in America they didn’t like it because of the nudity! So in England the feminists hated it and in America the feminists loved it! I remember somebody sending me a tape of this show with a priest talking about it in England. And I was like ‘What the fuck is going on?’ Ha Ha!”

With a success-filled career behind him, you wonder how Jonas feels about the video today…

“That video changed my career,” he says, “changed my life basically. And I remember thinking ‘if this was all that was need to change my career then I should have done it a long time ago!’ you know? A little tits and ass? That’s easy!”

And, when asked again about whether the controversy affected him personally, he’s equally calm in his response.

“Not so much,” he reasons. “Maybe I didn’t pay enough attention to things like this back then. I knew that a lot of people were angry… one thing that did happen was that, when I moved out to LA, people would be looking at me and my friends when we went out and feeling a little nervous. I think they were waiting for us to go Smack My Bitch Up on them. Ha Ha!”