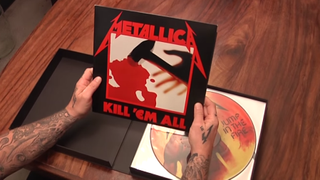 When Metallica released their debut album, the world wasn’t quite ready to accede that they were the new Top Guns of metal. The underground scene loved them, but the mainstream still clung to old values – and the band’s determination to distance themselves from the old school wasn’t solely reflected in the music.

“We planned to call it Metal Up Your Ass,” drummer Lars Ulrich said in 1984, just after the album was released. “Seriously, we had the whole thing mapped out – even down to the cover we wanted. We were gonna have a hand coming through a toilet bowl, holding a machete, dripping with blood. And the toilet had barbed wire around it. That would’ve gotten everyone squirming uncomfortably.

“Our record label [Megaforce] told us that record distributors in America had strongly objected to the title and the planned sleeve. And we ran the real risk of not having our product stocked,” Ulrich explained at the time. “That wouldn’t have helped us at all.”

So the band decided to modify their sleeve art concept, but while still making sure the new design retained a certain underground edge.

Ulrich: “We wanted something that would shock everyone – except the fans. The title Kill ‘Em All was our way of getting back to the distributors, who were trying to censor us.”

The design itself was again very much down to the band themselves. While making it acceptable enough to ensure the album was freely available, they were also determined to introduce an element of gore and violence into the graphics.

“Once we had the title, it was obvious to have a sleeve that featured a lot of blood. It didn’t take much to think of having a weapon on there as well.”

Being careful to avoid the actual act of blood-letting, the band hinted at what might have happened, with the outline of a hand releasing a hammer.

“There’s a cartoon element to the whole thing that was element,” admitted the drummer. “After all, if you’re not showing any violence, who was gonna object? So we got our own way – and so did the music industry.”

But Metallica have never been once to disregard a great idea, and the band eventually turned the original artwork into a t-shirt design.

Metallica’s new album, Hardwired… To Self-Destruct will be released on November 18.