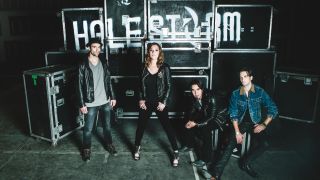 On April 13, we published the first part of Halestorm guitarist Joe Hottinger’s in-depth guide to ‘Into The Wild Life’. Here’s the second and final part…

**BAD GIRLS WORLD **Joe Hottinger: “OK, where were we? I love Bad Girls World. To me, this is Lzzy’s soul voice. She’s got some really emotive stuff going on here. I’m so glad this one’s on the record. Lzzy and I wrote it together at this apartment in LA where we were living. The muse was strong in that place. The funny thing is at the end of the song I was struggling to figure out the vibe I wanted for the guitar solo. Jay [Joyce, producer] suggested putting the end of the song on loop, and I just kept playing until I figured out where I wanted to go with it. What he didn’t tell me was his plan all along was to fade out the band and just have a guitar solo at the end, which would then fade into Gonna Get Mine. And I’m glad he didn’t tell me because I would’ve freaked out and over thought it. He’s no dummy, that Jay Joyce! He tricked me into a cool guitar moment that I’m proud of. It’s real warts and all, just me being myself and playing along.”

GONNA GET MINE “The transitions on this record are some of the coolest things about it. They make it an album rather than just a collection of songs. You gotta listen to it front-to-back to really get the full effect. And going into Gonna Get Mine is one of those moments. It breaks down to just this guitar part, and it sets it up perfectly for this big riff and this big stomp. It was the last song we wrote for the record. Jay told us we needed one more big rocker. So we went home for the weekend to work on something. Lzzy’s had this riff for a while – years in fact – and it’s always been in the back of our minds. We were at a hockey match talking about music, which is what we do, and we were singing this riff in our seats whilst watching the game. Finally, we found the song swilling around at the bottom of our bottles of beer, which is where a lot of those good ones lives, and we went home and worked it out. The song’s about being unapologetically yourself. Like, ‘Go fuck yourself if you try to fuck with me!’ It fits right in with the theme of the record. And again, Arejay killed it. He plays a different beat in every single section. That’s like one of those little bits of ear candy people will hear after like the seventh or eighth listen. There’s loads of that going on throughout the record and I love it.”

THE RECKONING “This song was originally written as a piano ballad. We loved it so much, but we didn’t really want that flavour again as we already had Dear Daughter. We were trying to figure it out how to make it different whilst still keeping the vibe of the song, and Jay really led us towards the way you hear it being played here. I’m so glad he was with us making this record for so many reasons, and this song is one of them. It’s about revenge and a dish best served cold, so we wanted it to have a strong impact. The best way to respond to someone who tries to fuck with you is by being happy and living a good life, and not letting them drag you down. That’s the message on this one. I ended up playing some chord progressions on the guitar that I’d have never even thought of too, and that’s all thanks to Jay saying, ‘Hey, play something like this.’ It was so much fun to put this song together because it’s different for us. It’s a new feeling, and I really like it. It’s one of my favourite moments on the record, especially that middle-eight section.”

APOCALYPTIC “We were initially going to lead off the album campaign with Amen, and then our label said we should go with Apocalyptic – and they were totally right because this was more a seamless transition between the last album (The Strange Case Of…) and this one. We wanted to lead the listeners in subtly, and I’m glad that we did. The response to this song’s been great when we play it live. We just can’t wait to play some more of the others now…”

WHAT SOBER COULDN’T SAY “I love how this song starts out. I still laugh every time I hear it, because it sounds like you’ve walked into the Halestorm lounge and there’s people in dresses and suits drinking Martinis (laughs). It’s a heavy lyric though. Sometimes you do have to be drunk to say what you really mean, and this is a heavy story about getting out of a situation that you shouldn’t be in. Unfortunately sometimes you have to get hammered to just get the courage to be honest. I also love this song because it has another neat vibe that we haven’t really done before. We really pushed ourselves on this record in that way. It really stretched me too. I had so many feelings throughout the recording of like, ‘Who am I? What am I? Am I the right guitarist for this band? Am I good enough?’ It was one of those records, you know. I questioned myself at every stage because I was pushed really hard. And thank God that I was because I can get very comfortable. It’s important to get yourself out of the comfort zone every once in a while.”

**I LIKE IT HEAVY **“We do like it heavy, man! We grew up on Lemmy and Ozzy and Zeppelin, and we wanted to bring that home at the end of the record. Great heavy music like Sabbath or Zeppelin has an emotional weight to it. The heaviness comes from the groove and the lyrics. It’s not about massive distortion and screaming. We’re not talking about that kind of heavy. It’s more about the soul-crushing weight, you know? We tried out about three or four different versions of this song in the studio to figure out which way sounded the best. In the end this bluesy one, four, five progression with a nice old school classic rock feel just felt the best to play. It’s a fun one to play live and a great little rock ‘n’ roll ditty to end Into The Wild Life on.”

Into The Wild Life is out now through Atlantic.

Read the first part of this track-by-track guide below:

Track-by-track: Halestorm – Into The Wild Life