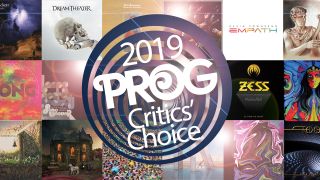 We started with a list as long as the headiest prog rock epic, and finally we’ve narrowed it down to a manageable, bona fide classic. Prog’s writers have had the unenviable task of whittling down 12 months’ worth of fine proggy releases into their own Top 20s, for Prog’s master list. And it’s when you check out what didn’t make the grade that you realise what a stonker 2019 has been!

We said: “Literate heart-aching art-rock at its finest. Flowers… will hoover up the bouquets.” – Chris Roberts, Prog 95

We said: “Its mood is sanguine, a tribute to experience and the bonds that continue to bind us.” – Rob Hughes, Prog 102

We said: “The Bell tolls with tension and truth: Iamthemorning’s last record
was no false dawn.” – Chris Roberts, Prog 101

We said: “It’s hard not to feel their magic, but those moments are fleeting. ”
– Philip Wilding, Prog 101

15. Steve Hackett - At The Edge Of Light (InsideOut)

13. Bent Knee - You Know What They Mean (InsideOut)

We said: You’re left in no doubt you’ve encountered one of the finest albums of the year.” – Sid Smith, Prog 103

We said: “Even in the shadow of 2017’s epic double album The Tower, Motorpsycho continue to shine.” – David West, Prog 95

We said:  “Swirling cosmotronica forged from inside the Big Bang. Surrender to it to appreciate it.” – Joe Banks, Prog 99

We said: “South Of Reality for sure, but close enough to home to keep you coming back.” – Johnny Sharp, Prog 95

We said: “The hallmarks of a band reborn, rediscovering their heritage and making accomplished, ingenious music.” – Rich Wilson, Prog 95

We said: “Combines the whimsical with the serious in a way that Allen would approve.” – Joe Banks, Prog 98

We said: “Strap yourselves in and say hello to one of your albums of the year, folks.”
– Dom Lawson, Prog 96

“It’s an album that changes and matures with every listen. And it’s an absolutely stunning achievement.” – Fraser Lewry, Prog 103

We said: “A personal and powerful album from one of the scene’s vivid performers.” – Claudia Elliott, Prog 100

We said: “It’s no coincidence that this album seems more suffused in light than usual and full of colour.” – Mike Barnes, Prog 98

We said: “The stringently high standards to which Åkerfeldt holds himself and
his band remain intact.” – Dave Everley, Prog 102

They said: “Very humbled by the news of In Cauda Venenum being picked by the critics of Prog Magazine as the album of the year. I haven’t paid anyone off, but our manager might have. With that said, it’s not the worst record ever released. I’m quite fond of it myself. So to our friends over there: thank you from the bottom of our hearts. We’re collectively chuffed!”