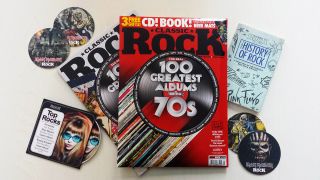 The latest issue of the world’s greatest rock magazine steps into the spotlight today – and it’s a monster.

This month we look at the REAL 100 Greatest Albums Of The 1970s, from unsung classics by the likes of Queen, Pink Floyd, AC/DC, The Rolling Stones and Deep Purple to lost treasures from David Bowie, Motörhead, Journey the Ramones and more. Think you know the greatest albums from the greatest musical decade of them all? Think again. (And it’s a Led Zep IV-free zone).

If that wasn’t enough, the issue comes with not one, not two, but three free gifts: a set of four exclusive Iron Maiden beer mats featuring classic album covers from ’Arry and the boys! A free paperbook book, The History Of Rock, featuring must-read writing on Jimmy Page, ZZ Top, Metallica, Genesis and more! A free CD, Top Of The Rocks, featuring the most electrifying new sounds around!

“But what’s in the issue?” we hear you ask. Will, this lot for a start…

AC/DC: Why Angus and co are the purest rock’n’roll band out there, by Aerosmith guitarist Joe Perry.

George Harrison: A look at All Things Must Pass, the triple album that kicked off Harrison’s post-Beatles career.

The Faces: Drummer Kenney Jones recalls the boozy days of A Nod Is As Good As A Wink.

Barney Bubbles: The visionary artist whose work with Elvis Costello, The Damned and others defined the 70s.

If that wasn’t enough, we’ve also got…

AC/DC: Can they continue without Beano?

The Struts: Straight outta… Derby? The glitter-drenched rockers who are out to take Queen’s old crown.

Joe Bonamassa: “Ten years ago I was kind of a grumpy asshole. Now I’m a lot happier.” This and more from the modern-blues superstar.

What’s on the Free CD

Top Of The Rocks: Greetings, rock pickers! Where can you find 15 of the world’s newest guitar grooves, from Denver to Darwen, in one handy place? Right here. Including Red Sky Mary, Mojo Wizard, RBI, Modern Kicks, Hawk Attack, Furr and more…

Read Classic Rock magazine the way you want: instantly read the articles from issue 222 of and dive into the back issues right now on TeamRock+.

Get a copy of Classic Rock 222 delivered to your door or subscribe and get it every month.