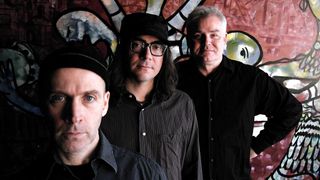 There's a wall of sound cascading from the stage at the Bodega in Nottingham. Crushing riffs are being dragged through mind-bending time-structures and untethered rhythms. The Messthetics – the latest musical project to come from the minds of Fugazi's former rhythm section, AKA  drummer Brendan Canty and bassist Joe Lally – are providing a masterclass in musicianship, taking the assembled crowd on a sonic journey with no defined destination.

This new band amalgamates the players' collective histories into a challenging approximation of 'rock'. Fugazi's legendary legacy can, of course, be found in the mix, alongside the sounds of storied guitar virtuoso Anthony Pirog. Together, they're creating music made by people who are themselves redefining their love of making music.

An hour before Messthetics were due to take the stage, Louder caught up with Lally and Canty to discuss their first UK tour and to get to the core of what made them re-connect to release music together.

There’s much to discuss. Canty birthed “emo” with DC trailblazers Rites Of Spring, provided the beats to Fugazi's incendiary back catalogue, and has spent over a decade in soundtrack work. Following Fugazi’s hiatus, Lally has been involved in a steady stream of solo and collaborative work, including Ataxia; a short-lived art-rock band he formed with Red Hot Chili Peppers guitarist John Frusciante.

Messthetics connects this pedigree with Pirog, a genre-hopping artist whose divergent career spans prog, psych rock, avant-jazz and experimental classical music. Often called upon by musicians hoping to collaborate, Pirog has become something of a go-to name for those looking to expand their musical horizons.

There seems to be an element of fate in how the band came together, as Lally explains: “I was living in Italy at the time that Brendan was seeing Anthony play in various forms at shows in DC. He saw all the ways Anthony plays and was, like, 'Who the fuck is this guy? He’s fucking insane.' He was looking for a reason to play with them and when I came back from Italy I had music I had been making at home. So, I played that to Brendan, and it made him think of Anthony. I was really looking for someone like Anthony and, I guess, Brendan just picked up on all that.”

Canty reiterates this symbiosis. “We were playing together before [Pirog] came on the scene, just trying different things together because we happened to be in each other’s company, working on some of Joe’s music that he had brought back from Italy. When I listened to Joe’s stuff, the only person that I could think of that resembled what I heard was Anthony. He has this virtuosic noise and experimental thing going on.”

When they all came together for a jam, something clicked and the ideas started to flow from the off. “As soon as we brought Anthony into the mix it worked almost immediately, we had stuff to work on right away,” says Canty. “We just started fucking around with sound and songs that he had, and experiments. We were experimenting, improvising with each other, with electronics; there was all this going on straight away. He’s just an endless musical imagination and skill. If you try to talk to him about what he is actually doing in a solo – well, I wouldn’t bother. He just has all this high-end music theory. He knows his shit.”

When the trio met, Pirog was in the midst of trying to get something together for John Zorn’s Tzadik label. He asked Canty and Lally to act as his rhythm section to make this happen. “Brendan and I were just giving him as much time as he needed to write songs, letting him flesh them out and doing what we needed to do to it, and letting him see where things were," says Lally. "We just kinda realised we were a band, that we were going to be a band and we had to come up with a name. We just really loved what we were doing. Zorn or no Zorn, we are making a record.”

Pleasing Zorn became less of a concern after the band's first show, when Fugazi bandmate and Dischord Records boss Ian MacKaye offered Messthetics a spot on the legendary label. Despite close friendship and history, it's not an offer MacKaye would've made had the music not struck a chord. The band now had a home to unleash their experiments.

The resulting record – the band's instrumental, expansive self-titled debut – does seem a perfect fit for Dischord. The riffs frequently recall Fugazi’s muscular post-hardcore sound but also their taste for evolution. Elsewhere, the tracks veer off into progressive and jazz territories, while all the time underpinned by tight rhythms that hold them together. It’s experimental guitar music with a recognisable tone, like so many of the label’s releases.

Messthetics has revitalised the pair's passion for playing music, not only together but also to other people, live. There’s something challenging and special about this unit. “It’s this crazy thing, the sky’s the limit all of a sudden,” they explain.

Nowhere is this more apparent than on stage. The power of album track Serpent Tongue expands outwardly in every direction from its defining riff. Throughout the set, as the band improvise, expand and destroy the fabric of their songs, the whole thing often feels close to collapse.

Before the show, we ask Canty how much studio improvisation they take to the stage. "In between songs for sure, we do a lot to tie songs together," he says. "There's a couple of places we do that and, then, things go on for an indefinite amount of time. We know what we are playing, but we don't know when it is going to end. There's a lot of looking at each other and listening to each other. Then there are songs like Serpent Tongue that I keep trying to get him to do for 20 minutes, but he won't do it for that long!”

The 'he' in question here seems to refer to Pirog, who busies himself by teasing out some indefinable sound on his guitar; a blitzkrieg of noise that somehow keeps in time with the rhythm section. It could go on for hours. “I would like to stretch time, as an old man, as long as I can," nods Canty. "Till they pull the plug."

How challenging is this freeness of playing?

“The music is very hard and we want to challenge ourselves,” says Canty. “Where it’s Anthony’s natural thing, it’s very different for us. It’s awesome.”

"Every night is challenging. I do totally fuck up many, many times every night, and I laugh about it every night because it is just beyond my abilities, this music. You just look at the stage and when I am laughing, that’s when I have totally fucked up!”

No one notices the fuck ups tonight. Instead, there's a lot of love and acceptance in the room. Messthetics are seemingly avoiding the negativity that new projects from classic bands sometimes face. "It seems people have been satisfied with their preconditions for enjoyment," suggests Canty.

But, by the same virtue, they openly admit that having the legacy they do is what is bringing people out to shows, as much as the quality of the new music. Lally accepts that the past informs his present – "Unless you really cocked up in the past, and really had a shitty band, when it might be better to erase the past."

On the subject of nostalgia, we can't help but raise the question. As Fugazi never technically split up, is there any chance we might see them return?

“You never want to say never about anything,” says Lally. “Because how can you say that about the future? But there does seem to be a lack of time to allow it to happen, because the four of us would have to spend a lot of time together to figure out, 'Should we play old songs?' 'Who are we now?' 'What is it now?' We are not the kind of band to get together and just rehearse two hours of old songs to go out and play it, rake in the dough and come home.”

"If we got back together it would have to be from the spirit of creativity," Canty adds. "You can’t put an inherently creative group back together and then not have the creative element.”

“It would be different if we got back together.”

Much has changed in their lives, and in the world, since Lally and Canty were last making music together. Neither are strangers to political activity, making a career of benefit shows and forming part of the Positive Force DC movement in the 80s and 90s. What these guys say on political matters carries some weight for those that know their history. Our conversation moves on to the political climate both in the UK – yes, specifically, Brexit – and at home in the US.

“You don’t have to feel too bad about [Brexit] because of things back home," says Lally. "Unfortunately, it seems like many countries can say the same thing. There's some whack changes going on!”

“It’s interesting to live in such interesting times, ain’t it?” asks Canty. “I never would have expected that something of this magnitude would happen in our lifetime. But I never would never thought we'd have had gay marriage or weed would be legal. It is legal everywhere in the States now."

“I never thought we’d have a black president. That was unheard of, but it happened,” offers Lally, adding a characteristic positive spin to the negativity.

Back into the present and the trio ends their set in a maelstrom of controlled noise, an awe-inspiring display of musical exploration. They look content, they look enthused by the music they have found themselves making.

The Messthetics are a band that exist in spite of their collective legacy, but one that are also powered by it. They use that power to cut through both the complacency of rock music and these troubled times. The great thing is, despite that legacy, they're only just getting started.