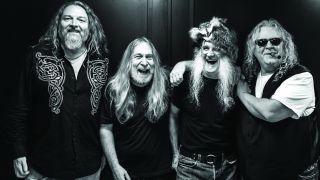 “Alright, Borderline! Finally! After 34 years I got my fat ass onto an aeroplane and here we are. Let’s fucking do it!”

It’s with these immortal words from rhythm guitarist/vocalist Richard Young that the debut UK concert by the Kentucky Headhunters gets underway. Given that the Grammy-winning group has existed since 1968 (initially as Itchy Brother) it seems implausible that they’re here at all. And it’s almost certain that without the intervention of Young’s son John Fred, of Black Stone Cherry fame, they wouldn’t be.

Last year, when John Fred returned to Edmonton, Kentucky, following an Arena tour of the UK with BSC, the drummer brought an ultimatum for his pa.

“‘Daddy’, he told me,” relates Young Senior, “‘it’s time for you and the Headhunters to put up or shut up.’ It wasn’t John Fred alone; the four of ‘em cornered me in the practise house and there was no getting away. ‘We’ve been talking you up,’ said John Fred, ‘and we’re tired of sounding like the boys that cried wolf.’”

In the dressing room pre-show, Young reveals that a fear of flying has been to blame. Back in 1991 Mark Knopfler took a liking to the band and invited them to open on a UK tour from Dire Straits, but the Gulf War intervened.

“And I was like this…” Young laughs nervously whilst pretending to wipe away beads of relief-inspired sweat from his brow.

However, when the Headhunters were confirmed for last month’s Sweden Rock Festival, Young admits that he “broke out in hives”. Nevertheless, he made it onto that plane, and now for the second time he’s here again on European shores. On this tour, which mixes their own indoor club shows with a Main Stage spot at the weekend’s Ramblin’ Man Fair and an appearance at the Rock & Blues Custom Show in Derbyshire, the band are playing with equipment borrowed by their support act, Bad Touch. It’s also the first time in their history they’ll have played eight shows in eight days – no mean feat for guys of such vintage. Perhaps understandably, the Headhunters are treating this whole thing as a bit of an adventure.

Signed to the heavyweight Mercury Records during their heyday, enthusiastic nods follow when the band are asked whether they actually sold any records here in the UK, though lead vocalist/bassist Doug Phelps notes: “Had we played here while they were selling it might have been a whole other story.”

A resounding, disbelieving cry of “naaaaaww” fills the air when it’s suggested that Young’s fear of flying and its limiting effect on the band’s European potential might have became an issue. Given that Richard and drummer Fred are brothers and lead guitarist Greg Martin their cousin, Phelps being the ‘new boy’ of the band with a mere thirty years of membership, there’s no reason it could.

“We’ll put on the same two-hour show whether there’s one person out there or a couple of hundred,” Richard promises as Classic Rock leaves them to their preparations. “We’ll play as if there were ten thousand out there. We didn’t come here for that kind of affirmation; this is four our own peace of mind.”

Come show time the Borderline is respectably populated, though it’s fair to say that most of those in attendance seem more knowledgeable about the band’s backstory than their music. Frankly, it doesn’t matter. The material’s earthy groove and the band’s warm between-song banter about drinking Strawberry Hill Boone’s Farm Wine quickly make us feel right at home. “I’m telling you, if you can’t get laid on that stuff you ain’t ever gettin’ lucky, bro,” Richard Young beams.

Touchingly, the Headhunters are open to audience requests and when a diehard demands to hear Dixie Fried, a Carl Perkins song recorded for the 1993 album, Rave On!, they even go off set-list a while.

Some of the best songs — including Stumblin’, Shufflin’ Back To Memphis and Walking With The Wolf — are from Meet Me In Bluesland, a record made with Johnnie Johnson, Chuck Berry’s late long-time pianist, shortly before he died. Johnson was the man responsible for inspiring Berry’s classic Johnnie B Goode and the proceeds from …Bluesland now go to his family. “Don’t you dare leave here without a copy,” Young scolds. “As was usual back in the 1950s, the singer got the dough and the other guys got the dole.”

The Headhunters are certainly an interesting bunch of characters. Onstage and off, Richard Young puffs away at a cigar that remains defiantly unlit, while behind the kit sits his sibling. Wearing a hat, it appears that Fred Young has long white hair though removal of said headgear reveals a bald pate and a pair of the longest sideburns you’ll ever see – think the lovechild of Trevor Bolder in his Spiders From Mars era and Charlie Starr from Blackberry Smoke and you’re not even halfway there.

A mid-set rendition of the Clapton-popularised Have You Ever Loved A Woman and an encore medley of The Beatles’ Don’t Let Me Down and Hey Jude offer reminder of Richard Young’s earlier claim that “all we ever wanted to be was an English rock band – we just couldn’t make the geography work.”

It’s a brave band that takes on The Animals’ The House Of The Rising Sun, and a creditable one not to lose. Mostly, though, their set is steeped in American blue collar music, with stop-offs via ZZ Top and the Georgia Satellites. Closing the main set, the Ballad Of Davey Crockett really gets the Borderline jumping.

No, of course The Kentucky Headhunters are not re-inventing the wheel, they’re just happy to keep the thing spinning, and it’s something they’re pretty darned good at.

The most annoying thing about this evening is that Black Stone Cherry, who don’t arrive in the country till the weekend, were not around to say, ‘We told you so’ to Richard Young. It’s a conversation that will definitely come up backstage at Mote Park, though, that’s for sure.

Back in the Borderline dressing room before they’ve played a note, Richard Young is confident enough to predict that this won’t be his band’s one and only visit to the UK.

“Now that I can fly…”, he begins, only for Greg Martin to complete his sentence: “… We’ve created a monster.”

The History Of Southern Rock In 30 Songs