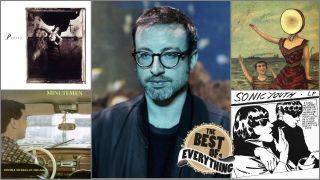 Duncan Lloyd is a busy chap. Best known as the guitarist for British indie rock group Maximo Park, where he was responsible for top 10 hit Our Velocity, over the years Lloyd has dabbled in a sideline of increasingly experimental and complex solo projects.

As these projects mount, so too does the songwriter’s debt to alt.rock legends who inspired him. The genre’s influence on his work can perhaps be most keenly felt in new album I O U O M E – a bouncing collection of warm indie rock which, despite its upbeat soundtrack, channels vulnerability, melancholy and nostalgic yearning.

Below, he picks the 10 albums which have inspired him most over the years.

“The combination of warped lyrics , bursts of pop melody and inventive recording methods brings Surfer Rosa to the top of the pile. The seemingly free & playful characteristics of each band member makes the Pixies’ debut album, for me, one of the most inspirational albums of all time.”

Neutral Milk Hotel - An Aeroplane Over The Sea

“Jeff Mangum’s lyrics have always cut a little deeper and on this album he sings them with a force and delivery that can plough right through your imagination. There’s something unique about the raw, rhythmical acoustic nature of it that makes the songs feel emotive and timeless.”

“Dry and Rid Of Me are both big albums for me, but Stories From The City, Stories From The Sea is my personal favourite. It came about at a time when I left my home for the last time and headed north to Newcastle to give my band one last shot.”

Minutemen - Double Nickels On The Dime

“D.Boon, Mike Watt and George Hurley probably didn’t realise how important this album would be for so many musicians when they made it. I have listened to this album more times than I can remember! It’s tight, playful, angry, clever, political, melodic, etc, etc. An essential classic.”

“The pulsing underwater atmospherics and melancholy of In Rainbows is beautiful. I hadn’t listened to them for a while when this came out as I guess it’s easy to take bigger bands like Radiohead for granted, but this re-engaged everything I liked about them when growing up.”

“I like Deerhunter’s approach to songwriting and the way they record, always with a little grit in the vocal and with the band here sounding really exciting, as if they have been recorded in a dingy room through giant ripped speakers.”

“It talks for itself. If you haven’t heard it, try it now.”

“Sonic Youth made so many great records that you can dive in almost anywhere & get something out of it. I got more and more into Goo as time went on but along with Daydream Nation this is a classic and full of inspiration.”

Life Without Buildings - Any Other City

“Not as well-known as they should’ve been, but a very important band for me. It darts around highly melodic guitar and bass playing, great drum rhythms and Sue Tompkins’ clever and infectious lyrics and vocal style.”

“I saw Slint in Seattle when they first reformed, Will Oldham (of Bonnie “Prince” Billy) who also took the photo for the album sleeve was in the audience, and being into both his and their music it was a very special gig to be at.”

Duncan Lloyd’s solo album, I O U O M E, is released on May 26th via Afternoon In Bed records.