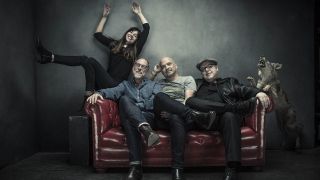 Seventeen years afterthey notoriously sent their monkey to heaven with a cry of ‘If the devil is six, then God is seven!’, indie-noir proto-grunge legends Pixies are back facing demons once more. Guitarist Joey Santiago recently checked himself into rehab to tackle drink and drugs issues, while their new album Head Carrier, their second since re-forming in 2004 and losing original bassist Kim Deal in 2013, is a mature take on seminal early releases Surfer Rosa and Doolittle, with its imagery of seedy sex, miraculous decapitations and “monster gods”. Black Francis dishes the filth…

How is Joey’s rehab stint affecting the band?

There’s a little bit of a question mark on our calendar. I can’t imagine how challenging it is. I read the statistics and hear how hard it is to turn your lifestyle around 180 degrees, but we’re going one day at a time. I think it bodes well for the band being able to accomplish more work. I’m kinda like, “Hey Joey, if you don’t wanna go on the road, let’s make another record. If we’re gonna go on the road, let’s figure out how that works with being sober.” It’s stuff we’ve dealt with before with other band members. We’ve all had it; I’ve dealt with it. I had to learn over the years, “Oh yeah, I don’t really perform as well if I drink before a show,” for example. I always tend to think of our backstage as pretty tame compared to a lot of other rock bands, but it’s there, and if drinking or drugs takes over your life, it catches up to you. We’re pretty good at compartmentalising all the drama of our personal lives and saying, “Okay, now we’re on tour, let’s do the work.” It’s always when you go back to reality, back to kids and wives and relationships and mortgages and alimony payments.

When you made 2014’s Indie Cindy after a thirteen-year recording break, what sort of band did you discover you were?

We did consider the option, “Okay, Kim [Deal, bassist]’s left the band, maybe there’s something about the band that’s so special that it just can’t exist without Kim. Should we just stop?” We considered it for probably, like, half an hour. It doesn’t feel right to us, so we’ve just forged ahead. That’s what we do: we don’t run a restaurant, we run rock music. Gil [Norton, producer]’s dramatic artifice that he was suggesting was that we were away, on another planet, the Planet Of Sound or whatever, making our music on Mars, doing what we were doing and now we’re going to let people take a peek at where we were at. We bought into that, thinking, “What would it be like if we had been making music for twenty years on Mars and decided to come back and make a record? What would that sound like?”

The new album delves into the sounds and mythologies of seminal early albums Surfer Rosa and Doolittle. Is that a brave move?

Surfer Rosa and Doolittle really represent… [He’s interrupted by an incoming call.] That was Joey, pretending to be the director of the rehab place. He’s kind of a prankster, Joey – he likes to call people from the rehab place to tell them he’s at the airport on his way to wherever you are. He called my ex-wife and said he was on the side of the highway and to come pick him up, that he had escaped. He hasn’t escaped yet! [But mythology is] one of the things I tend to gravitate towards, for all the same reasons that other people gravitate towards it. It’s literary, it serves as great metaphor… The metaphors just come out. For example, [the title track refers to] the history of St Denis of Paris, the cephalophore saint. The miracle of the cephalophore is that his or her head gets cut off and a miracle occurs – the separated head and body still lived for a short time. There are about fifty examples of this in Christian mythology, but St Denis is probably the most famous one. We definitely don’t sing about current events – that’s something I prefer to avoid – but I couldn’t help noticing that, “Oh wow, here I am singing about these guys that get their heads cut off and golly gee there’s an awful lot of decapitation going on in the news lately isn’t there?” It sort of validates your attraction to a particular subject matter.

So what exactly is the ‘Um Chagga Lagga at the side of the road’?

That’s a song about Europe and France but a certain kind of sexuality – i.e. prostitution. Maybe not the kind of prostitution that you observe in a red light district in Amsterdam but the kind you observe at a truck stop or on the side of a road. When you see a prostitute standing by the side of the road in a cornfield in the middle of nowhere, it really strips away everything. It’s very raw, it’s real, it feels kinda ancient because it is ancient. I’m not trying to suggest I engage in sexual activity with prostitutes – it’s not my style. But I’ve certainly observed that.

Was it fun playing a demon on Baal’s Back?

I was thinking about that ancient type of god, the god that’s not loving or hateful necessarily but just all-powerful and more brutal. “You better sacrifice some of your fellow humans to me or you’re all gonna die in a famine.” Dealing with this monster-level god. I think he’s a little broken-hearted because he’s been forgotten about. “You used to be so loyal to me and now you’re not. Well, here I come with all my wrath.”

Why did you decide to write All I Think About Now as a message to Kim Deal?

It was a big moment for Paz [Lenchantin, new bassist] and I. “Let’s write a song.” “What do we write about?” “Kim.” “Alright, let’s write it as a thank you letter to Kim.” That’s kinda heavy, kinda poignant. Paz has been asked to fill Kim’s big shoes – it’s like she’s singing the song to Kim, even though I did the words. I think it would’ve been too forward or too pushy if I had sung it, y’know? It didn’t even feel right for me to sing any background vocals on it – it started to seem too maudlin or too trite.”

Is it true that interim bassist Kim Shattuck was sacked for stage-diving?

We didn’t part ways with her because of that, certainly not. She had a hard time because we’re like, “We just play music, we’re just the Pixies, we’re blue collar, going to work, doing our thing, we’re not uptight, we don’t have rules.” But then when someone moves outside of something that we would normally do, something that makes us uncomfortable, then you realise, “Oh yah, actually we do kinda have a rule. We don’t high-five with the audience, that’s not our energy.” We’re there for the audience but we’re not of the audience. It must’ve been very frustrating for her because she was doing what came naturally to her and we were constantly going, “No, no, not like that.” It wasn’t like we said, “Here’s our dos and don’ts” – it was having to be told after-the-fact all the time.