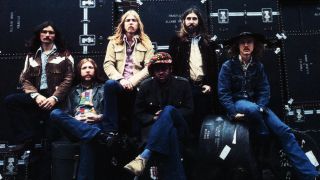 After signing with Capricorn Records in 1969, The Allman Brothers Band were catapulted to the forefront of American rock’n’roll.

Ecstatic with the group’s progressive, genre-shattering, guitar-intensive jams, fans and critics alike proclaimed them ‘the best damn band in the land’. But getting there, and creating the dynamic approach that changed the way rock bands employed dual guitarists, was no easy feat for co-six-stringers Dickey Betts and Duane Allman. But as a result of their efforts, the Allmans forged what has come to be known as the ‘southern rock’ sound.

In his first bands with his younger brother Gregg, Duane played straight lead and rhythm guitar. The time they heard slide guitar was the instrumental Beck’s Bolero, recorded by Jeff Beck with Jimmy Page.

Duane began working as a studio musician in Muscle Shoals, Alabama, in 1968, playing on a John Hammond session. “We jammed, and I was using open tunings and he asked me: ‘How the fuck do you do that?’” Hammond recalled. “That felt special, as much of a hotshot as he was, for him to ask me something about the guitar.”

In the early days of The Allman Brothers Band, the musicians shared a house in Macon, Georgia. There, Dickey Betts remembers, Duane began creating a sound that owed more to non-guitarists. “Duane played slide more like a harmonica than he did a guitar,” Betts explains. “He used to listen to all the harp players – Sonny Boy Williamson and all that – and he played a lot of harmonica licks on slide guitar. He used a glass Coricidin cold-medicine bottle on his ring finger, which is so unorthodox.”

One of the band’s drummers, Jaimoe, introduced Duane and Dickey to jazz albums by Miles Davis and John Coltrane. Duane proclaimed All Blues, from Miles Davis’s Kind Of Blue album, his favourite song, followed closely by John Coltrane’s My Favourite Things. In his excellent Allman Brothers book Midnight Riders, author Scott Freeman points out that while Miles Davis and the Mahavishnu Orchestra were blending rock beats into jazz, “the Allman Brothers Band was the first to approach that synthesis from the opposite direction. It was a rock group with a jazz sensibility and the skill to pull it off. The influence was most apparent in a song Dickey had written, a complex and melodic instrumental called In Memory Of Elizabeth Reed, which used All Blues as a blueprint, with its dominant and secondary themes and long, improvised solos. The two guitarists played off of each other like Miles and Coltrane, often both going at the same time and always pushing the other to take the music further and further.”

Many of the classic Allman Brothers songs were created in an old graveyard – the Rose Hill Cemetery in Macon. Freeman describes how the band would go there late at night. “They would sit in a semi-circle, passing around joints and a bottle of Ripple [wine]. They would pull out acoustic guitars and play music until the wee hours. There, in the shadow of moonlit tombstones, The Allman Brothers wrote and rehearsed the songs that would make them famous.”

Dickey and Gregg emerged as the band’s principal songwriters, with Betts composing Revival and In Memory Of Elizabeth Reed, named after a tombstone in the cemetery. On Sunday afternoons the band developed their repertoire by playing free concerts at a public park in Atlanta.

By 1969 Duane’s photo was on the cover of a local magazine and the band were drawing favourable comparisons to Jimi Hendrix and Cream. What made Duane’s playing in particular stand out? The emotion, for starters, which was immediately apparent to anyone who heard his solos on Boz Scaggs’s Loan Me A Dime, Aretha Franklin’s The Weight, and King Curtis’s Games People Play which won a 1969 Grammy for Best Instrumental.

As Warren Haynes, Govt. Mule guitarist and subsequent player in The Allman Brothers Band, explains: “Duane was able to take the old school style of sliding, and run it through a Marshall amp and have a big, monster tone. He was never content with just mimicking what somebody else did. He knew he had to transcend to a new level. Nobody had ever really approached it from that angle before – real fiery and just like a whip.”

When the Allmans’ manager, Jerry Wexler, was unable to interest Atlantic Records in an unsigned band led by someone perceived as a studio guitarist, he took a huge risk in paying $18,000 to buy all of Duane’s outstanding contracts and starting his own label, Capricorn Records.

In late 1969, the band’s debut album, simply titled The Allman Brothers Band, was released. From the twin drums and intertwining guitars of the lead-off instrumental Don’t Want You No More, it was instantly apparent that here was no ordinary group. The Allmans transcended styles, mixing jazz, blues, rock and improvisation into something all their own. The solos were spectacular, with Duane and Dickey bouncing off of each other or seamlessly locking parts, shattering the then-prevalent notion of designated ‘lead’ and ‘rhythm’ guitarists. Duane’s slide part in Dreams was a masterwork in standard tuning (open-chord tuning is usually used for slide). The so-called classic ‘southern rock’ sound had arrived in full blossom.

With favourable reviews of the album, the band began touring extensively. Playing long sets night after night, Duane and Dickey learned to solo at length without losing heat, building to climax after climax. Duane called this “natural fire”, explaining: “We have rough arrangements, layouts of the songs, and then the solos are entirely up to each member of the band. The naturalness of a spur-of-the-moment type of thing is what I consider the most valuable asset of our band.”

Eric Clapton, who had recently formed Derek & The Dominos, was floored when saw an Allman Brothers show in Miami in October 1970. He invited Duane to the studio to play on his album-in-progress, Layla & Other Assorted Love Songs. For Duane, this was a chance of a lifetime, and he wasted no time kicking things into high gear. At the Layla… recording sessions, he slid majestically through Key To The Highway and Have You Ever Loved A Woman, blazed bare-fingered through Why Does Love Got To Be So Sad?, and altered radically the main riff for Layla, transforming a slow ballad into a transcendental rock song. The landmark double album was recorded, including overdubs, in just 15 days.

Duane’s performance renewed Clapton’s long-dormant interest in slide. “At the time we recorded Layla…, there were very few people playing electric slide who were doing anything new,” Clapton recalled. “It was just the Elmore James licks, and everybody knew those. No one was opening it up until Duane showed up and played in a completely different way. That made me think about taking it up.”

The Allman Brothers’ second album, Idlewild South, was their best-ever studio record. But the group’s truest turf was the stage, and, given the length and intensity of their shows, it was natural for them to make a live album.

Recording at the Fillmore East on March 12 and 13, 1971, the band got enough stellar material to fill four sides of vinyl for The Allman Brothers Band At Fillmore East. It also produced the versions of Mountain Jam, One Way Out and Trouble No More on Eat A Peach, and Don’t Keep Me Wonderin’ on Duane Allman: An Anthology. Duane’s rip-roaring performances of Statesboro Blues, One Way Out, Trouble No More and Don’t Keep Me Wonderin’ set a still-unsurpassed high-water mark for blues-rock bottleneck, while the band pulled out all the stops in Mountain Jam and In Memory Of Elizabeth Reed.

The album was an enormous success and – along with the Grateful Dead – effectively invented the ‘jam band’ scene that still grips rock fans in the US today (with bands like Govt. Mule, Phish, Dave Matthews Band etc).

As the live …Fillmore East album was climbing the charts, interviewer Ed Shayne asked Duane about his thoughts on rock’n’roll. “Everybody is expending all this energy in various ways to get the same old feeling out of it that Little Richard can get in five minutes,” he replied. “And people are finally waking up to the fact that you can get as much of a good feeling out of a simple thing as you can get out of something that’s hard. A lot of people who would have you believe that they are intelligent musicians are playing bullshit. Music’s become so intellectualised. Man, music is fun. It’s not supposed to be any heavy, deep, intense thing – especially not rock music, man. That’s to set you free! Anybody that ever listened to Chuck Berry or any of them cats knows that. Rock is like a newspaper for people who can’t read. Rock’n’roll will tell you where everything is at. It’s something to move your feet and move your heart and make you feel good inside.”

Like Robert Johnson, Charlie Christian and Jimi Hendrix, Duane Allman is among those tragic musicians who develop quickly, burn incandescently for two or three years, and then are gone. For Duane the end came on October 29, 1971, when he crashed his Harley-Davidson Sportster into a truck near his home in Macon. At his funeral, Jerry Wexler praised Duane’s “unlimited ability for truly melodic improvisation” and added that “this young, beautiful man we love so dearly is not lost to us, because we have his music, and the music is imperishable”.

Duane’s playing style became one of the most influential in rock, most notably on Billy Gibbons, Joe Walsh, and Ronnie Wood. Gibbons’s slide guitar on the ZZ Top hit Tush bears more than a passing resemblance to Duane’s approach, and through the years Gibbons has treasured a guitar pick and Coricidin bottle for playing slide that Duane gave him when their bands gigged together. Joe Walsh credits Duane with teaching him how to play slide, and Duane’s influence is unmistakable on Walsh’s Rocky Mountain Way. When Rolling Stone Ronnie Wood was asked why he learned to play slide, he responded: “Duane Allman. When I heard him play on The Weight by Aretha Franklin, I was playing bass with the Jeff Beck Group. When that folded I immediately went into slide. I learned what Duane did on The Weight, and then I took it from there.”

The Allman Brothers Band has carried on with various line-ups, but none have surpassed the original. Their fans are legion, their disciples are many: Lynryd Skynyrd, The Marshall Tucker Band, Dixie Dregs, Widespread Panic, and The Derek Trucks Band, to name but a few. The sound Duane Allman and Dickey Betts created in graveyard jam sessions and free concerts in the park sparked a vibrant new strain of rock’n’roll that still fills venues and makes people happy. Duane would have wanted it that way.

For more on The Allman Brothers Band illustrious legacy, then click on the link below.

The Allman Brothers Band: The triumph and the tragedy behind At Fillmore East