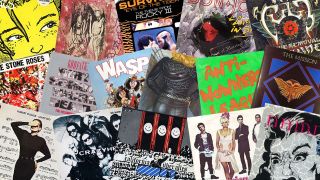 Before the vinyl resurgence of the mid 2010s, the 1980s served as the last gasp of the humble 7-inch single. By the end of the decade, the CD single had replaced its vinyl counterpart – meaning ‘bonus tracks’ instead of ‘b-sides’, and no-more ‘double A-sides’ – not to mention a considerable price-hike. As such, many of the decade's greatest singles were consigned to the history books and all but forgotten about... Until now. Here, we celebrate the art and music of some of the 80s finest, weirdest and most treasured 7-inches.

A product of a less PC age, Woman was hilarious, not misogynist: a heartfelt ballad that, after vows are exchanged, becomes a, er, heated domestic.

It was rock (metal?) but not as we knew it. From America but looking and sounding like they came from Mars, the Chuck Mosley-fronted Faith No More‘s second UK single still couldn’t prepare you for what was to come.

“Yew, are a tower of strength, to meeeeeeeee.” With its jangle guitars and patented Wayne Hussey scream, this was The Mission at their most goth. You can just smell the black eyeliner and purple paisley shirts.

Although this was adopted as an flag-waving anthem by many Americans, they kinda missed the point. One look at the sleeve and you can see that The Boss ain’t too chuffed about it.

Led by the media-savvy Wendy James, Transvision Vamp appeared for a brief moment in the mid-80s and then disappeared just as quickly. I Want Your Love cracked the British singles chart Top 5 thanks to the group's irresistible punky pop merit.

What were Messrs Dio, Iommi and Butler thinking of with this pic of a cigarette-puffing nun playing a snap with Beelzebub? Don’t they know the Devil always cheats at cards?

It might have been the theme to a brat pack movie, but not even Molly Ringwald can detract from this Bowie-esque slab of genius.

Yes, every rose has its thorn and every glam metal band has its heart-wrenching, sensitive ballad. Check out this sultry photo of the tattooed Bret Michaels, wondering which groupie to enjoy the company of next.

The tipping point: Pride’s chest-beating worthiness marked the moment that a previously underground(ish) cult(ish) band went supernova, introducing a new kind of rock into the mainstream. Post-punk, shorn of rock clichés, devoid of solos and riffs, but with a chorus so big that neither rockers or pop kids could resist – they may have written better songs, but this was the moment that Bono and the boys left Simple Minds, Big Country et al eating their dust.

’Allo ’allo ’allo, what’s going on here, then? Has chief Snake David Coverdale been locked in handcuffs by a jealous lover or by one of the many people he sacked from Whitesnake? Maybe this single should have actually been called Guilty Of Line-Up Changes.

We defy anyone not to smile (or cringe) when they hear this song from the follically impressive Swedes. Yes it’s cheesy, but there’s no denying its infectious melody. A melody that’s buzzing round your head right now, we’d wager. (And one that’ll stay there for the foreseeable future. Sorry.)

Housing a Roger Waters song with lyrics about global warming and capitalism (“Fuck all that we’ve got to get on with these/Got to compete with the wily Japanese”) this understated sleeve design was typically functional, not to mention ahead of its time.

A version of a song by Billy Bremner – not the footballer, ya numpty, the guy who was in pub rockers Rockpile with Nick Lowe – that Lizzy almost immediately disowned, this dull sleeve was the perfect foil for the music. Not exactly one of their finest moments.

“Suck the vodka from the carpet cos it’s nightime once again…” A storming single from a band who were the one-time pretenders to the Grebo crown and boasted members with names like Porkbeast (bass), Fast Green Dick (guitar) and Vom (what do you think: drums, of course). Unavailable on CD.

With their second album, the Scream moved away from fey Byrdsian indie pop and embraced leather-tousered, Les-Paul-through-a-Marshall, Stooges/Stones/MC5 Rawk. All the glorious noise couldn’t distract you from the fact that they still had a way with a killer tune, though.

A guilty pleasure? We feel no guilt at all. Sure, you always wished it had a few less squelching synth-bass lines and rocked just a little bit harder, but 99 Red Balloons was a classic pop single dressed in cod-new wave clothes, and Nena, as you told your mate, was gonna be bigger than Madonna. Um, yeah. (Check out Goldfinger’s cover from 2000 for a truly rocking version.)

Released in January, …Pie was the last of the Poppies’ madcap punk stuff – by the end of the year they’d discovered sampling and were living up to their name.

Dearie, dearie me. Here are three-fifths of London chappies Thunder in their earlier incarnation as pop-rockers Terraplane. Did those stylists at the band’s record company need a good tarring and feathering, or what? In addition to forcing Terraplane to don their now infamous Andy Pandy outfits, this alternative image – a motley array of kiss curls, spiv-suits and pre-chav barrowboy chic – took them to the very precipice of naffness.

A vocal duel in which Freddie wipes the floor with ol’ Dave, Under Pressure was nevertheless an inspired pairing with a classic bass line from The Deacon.

Okay, so the intro seemed to owe a little something to George Michael’s Father Figure, but this is one of those classy blue-collar ballads that the Jersey boys do so well. Lighters at the ready!

Along with Mega City Four, Senseless Things were part of a bunch of punk bands that eschewed angsty politicing in favour of great tunes (and dubbed ‘Fraggle Rock’ by Steve Lamacq). With artwork by Tank Girl illustrator (and future Gorillaz creator) Jamie Hewlett, Too Much Kissing was their finest moment: a slice of power-pop that builds into an anthemic cresendo. Pete Townshend was a fan too.

With Captain Sensible off appearing on kids TV shows, the Damned knocked off a 60s cover – and got the biggest hit of their career. Enter The Goth Years…

Closing out the decade with this rallying call, Neil Young put away his acoustic guitar and let rip with his trademark squalling electric. As well as giving us one of rock’s most identifiable choruses, its verse lyrics deal with topics such as the destruction of the environment and the futility of war. Even if the song does nothing for you, there’s no quibbling with the sentiment.

This sleeve by Viz artist Simon Thorp was highly appropriate, Blackie Lawless being Sid The Sexist, Roger Mellie and a male Flat Slag rolled into one.

Released in the States in 1979, this searing slice of nu punk came out in the UK in 1980, scaring school kids en route.

My Bloody Valentine - You Made Me Realise (Creation, 1988)

A monster of a single that MBV inexplicably kept off their Isn’t Anything album: pulverising, relentless, devasting – and all for 99p. Shoegazing it’s not.

Backed by a preening, drop-dead gorgeous backing band that couldn’t mime to save its life, Palmer’s Addicted To Love was one of the most iconic music images of the 1980s.

The song, the video and the solo concept that sounded the death knell for the classic Van Halen line-up. Bet Diamond Dave couldn’t get into those spandex pants now, but he’d still try.

Sheer sonic mentalism from a band that Virgin valued so highly they signed them for an album… and a movie! Initial runs of the album, Drill Your Own Hole, came without a hole, and the ‘movie’ was unwatchable. Still, with Nosedive Karma and B-side Don’t Be Human Eric – Let’s Be Frank, you could see why Virgin’s A&R got so excited. Great artwork too.

Post-Lizzy collaboration from Ireland’s finest. The military chic tied in with the song’s theme, but we remain unconvinced.

Yeah, yeah, it was a good song and everything but forget the music and check the strides, the boots… the hair! Quality.

Can’t you almost imagine the marketing meeting? “We’ve signed this new band. Birds, they are. Heavy metal… you know, biker chicks. Can play a bit, too.”

“Great. Are they dead sexy?” Pause. “Um… well. Lemmy from Motörhead recommended them. So what shall we use for the sleeve?”

“Something arty, a leather-clad babe. Looking away from the camera.”

Co-written with ELO’s Jeff Lynne, this was Tom Petty’s first release without his Heartbreakers. It’s one of those songs to sing loudly when the world is pissing you off.

It’s the bad old days of Margaret Thatcher’s iron-fisted rule and you’re a hungry new heavy metal band seeking maximum publicity. So you depict your mascot Eddie The ’Ead glowering over the PM, who’s torn down one of your gig posters. (Just as you thought it was safe to return to the ballot box, Maggie fought back with a bazooka for the Women In Uniform sleeve.)

Forget Smells Like Teen Spirit: this was the sound of grunge – and it was a whole three years earlier. From its jangling open chords to its ker-azy solo and “so fucked I can’t believe it” lyric, Dinosaur Jr were the first band to make indie kids wonder if they’d been right dismissing metal after all…

Facial whiskers, spinning guitars, fancy motors, women, and – wait for it, wait for it – a drummer named Beard who shaved every day! They may have seemed like a novelty act to some, but as Eliminator spawned hit single after hit single, ZZ Top had the last laugh.

They dressed like the Krays and played tasty old school rock that knew how to handle itself and didn’t take no lip. Birth School Work Death is rather more chipper than you might expect: like a knuckleduster wrapped in a velvet glove.

Gawd knows who these guys were – some little indie band from… Manchester, I think. Obviously they never went anywhere – nice sleeve though and a cracking little single drenched in wah-wah and produced by New Order’s Hooky.

They say that violence on screen has no effect on you, but after I watched Rocky III – for which this jabbing, thrusting, low-punching, bobbing and weaving soft rock classic was the theme song – I was so full of adrenaline I ran all the way home from the cinema. All 17 miles.

Named after Judge Dredd’s home town, there was nothing futuristic about Mega City Four. They were as meat and potatoes, anti-image, anti-concept as you could get. And on blistering pop-punk tunes like Miles Apart, they were a great cheap thrill.

Swashbuckling silliness from Eddie Tentpeg and his band of gay blades, Swords was a rousing piece of daftness which today reminds you that post-punk wasn’t all serious young men trying to make art statements.