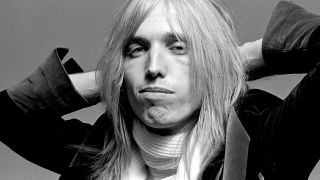 “This is shocking, crushing news,” said Bob Dylan, upon hearing of the death of Tom Petty. “I thought the world of Tom. He was great performer, full of the light, a friend, and I’ll never forget him.”

Tom Petty was a musician’s musician. A man other musicians wanted to work with. But he was also down-to-earth, an everyman with the common touch, a blue collar hero in a world of untouchable stardom.

In Classic Rock 243, Jaan Uhelski takes a personal look back at the life and times of the great American songwriters of the last 40 years.

Below, we pick 12 career highlights from the man Alice Copper called, “an honest renegade, a rebel and a true original.”

The last track on the Heartbreakers’ debut featured one of Petty’s greatest opening lines (‘Well, she was an American girl, raised on promises’), and he had lots of ’em. American Girl packed all the band’s essential elements – Byrds-like chiming guitars, hard-nosed yet wistful lyrics, widescreen hooks and Petty’s personable southern drawl – into one tight, irresistible package. From Tom Petty And The Heartbreakers (1976)

I Need To Know

Petty and co. responded to punk with their fiercest rocker yet. But while the band sped out of the gate, Petty’s airy vocals floated over the top like a dreamy counterpoint. He and Mike Campbell jabbed their guitars like they were chopping ice, but the musical ace here was Benmont Tench, who provided elegant, Gershwinesque piano flourishes. From You’re Gonna Get It! (1978)

Shadow Of A Doubt (A Complex Kid)

Even the album tracks stood out on the hit-filled Damn The Torpedoes. Case in point: Shadow Of A Doubt (A Complex Kid). Propelled by Stan Lynch’s rollicking drumming and the band’s now-signature soaring guitars, this high-octane rave was a close-up of Petty’s vocal prowess and persona: sweet then sour, wisecracking then tender, urgent then forlorn. From Damn The Torpedoes (1979)

He called his band the Heartbreakers, but Petty knew what it was like to be on the losing side of romance, as evidenced by this aching rock ballad. Dispensing with any hint of swagger, Petty’s soul bled with longing and regret as he uttered, ‘She’s a woman in love… but it’s not me,’ his cracked voice disappearing behind Tench’s searing keyboard swirl. From Hard Promises (1981)

Don’t Come Around Here No More

Eddie Murphy wasn’t too pleased about being namechecked in Petty’s laundry list of overexposed 80s celebrities – though there’s no word what Vanessa Redgrave or Joe Piscopo thought. After the meticulously crafted Southern Accents, Petty and his band got back to stripped-down, ramshackle rocking, and this Stonesy effort (co-written by Bob Dylan) packed grit and good humour alongside biting social commentary. From Let Me Up (I’ve Had Enough) (1987)

Petty might have been the awestruck “young kid” in the Wilburys supergroup, which also included heavyweights Bob Dylan, Roy Orbison, George Harrison and Jeff Lynne, but he more than held up his end. The band’s debut album boasted two smashing singles (Handle With Care and End Of The Line), but among its album cuts, Last Night, Petty’s cheeky, Caribbean-spiced ditty, was a particular highlight. From The Traveling Wilburys Vol. 1(1988)

A Face In The Crowd

Although billed as a solo album, all of the Heartbreakers with the exception of Stan Lynch appeared on Full Moon Fever, a three-way co-production by Petty, Mike Campbell and Jeff Lynne. Hits poured from the disc, but among its other treasures was A Face In The Crowd, a plaintive and altogether chilling ballad in which Petty – dispensing with any of his characteristic vocal stylizations – recalls the beauty of falling in love from out of nowhere. From Full Moon Fever (1989)

You Don’t Know How It Feels

Tom Petty Petty entered his mid-40s with nothing left to prove. For his second solo disc (which, of course, featured some of the Heartbreakers), he turned to maverick producer Rick Rubin, whose minimalist approach provided for a grittier and more intimate vibe. Overall, Petty sounded relaxed and jovial, especially on the gently rocking You Don’t Know How It Feels, on which he gave radio censors this beaut: ‘Let me get to the point/Let’s roll another joint.’ From Wildflowers (1994)

Despite a pair of recent solo successes, Petty hit a low period personally in the mid-90s, so he reconvened the Heartbreakers for his first and only film score for She’s The One. The record was loose and engaging and featured a number of stellar cuts, such as Walls (Circus). Petty sounded right at home amid the ringing 12-string guitars, and guest vocalist Lindsey Buckingham lifted each chorus high into the California sun. From Songs And Music From She’s The One (1996)

When you said “Tom Petty,” you didn’t think “blues” – that is, until Mojo, his first album with the Heartbreakers in eight years, on which authentic Chicago and Delta shuffles were the order of the day. But like many boomers, Petty discovered blues via the Brits, and the slow-burner Good Enough exploded with Zeppeliny Since I’ve Been Loving You-era anguish. The combination of Mike Campbell’s tortured guitar soloing and Petty’s heartsick vocals was emotional dynamite. From Mojo (2010)

On what would sadly become the last Tom Petty And The Heartbreakers album, the band threw away the rule book – there’s rock, there’s blues, even a bit of jazz – and despite imminent senior citizen status, they blasted away like youthful garage buddies. On Burnt Out Town, Petty is in storyteller mode, spinning a gin-soaked yarn about failed America as he yowls and howls like Jagger – though there’s clearly a little John Lee Hooker and George Thorogood in there too. One could sense Petty’s pride in being an elder statesman of rock, leading the band he loved, and he carried that with him until his tragically premature end. From Hypnotic Eye (2014)

You can read our tribute to Tom Petty in the latest issue of Classic Rock. Buy it online or become a TeamRock+ member to read it right now.