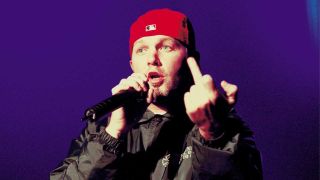 “All of them!” Did you just comment below without even reading the list? You comedian, you. Limp Bizkit’s obnoxious nu metal racket might not be for everyone, but Three Dollar Bill, Y’all$ is a certifiably great record, while Chocolate Starfish And The Hot Dog Flavoured Water boasted many singles. The band are a hit machine live when they’re not churning out five covers a night. Nonetheless, there are some hefty clangers. We waded through the mire and listened to the 10 worst Limp Bizkit songs – original songs, may we add, lest you expect Behind Blue Eyes to be listed tenfold.

Significant Other is, y’know, pretty good, but Show Me What You Got may be the one turkey amidst the majestic flamingos. Like Indigo Flow on Three Dollar Bill, Y’all$, Fred Durst takes the time to name-drop everyone and everything. Which is lovely and all; the bouncing chorus is great but is slightly hampered by our red-capped vocalist’s monkey impression, while the verses are just… well, naff and forgettable. And no, Mr. Durst, we don’t want to know what you do with your erection.

An interlude of sorts, The Key is a transition from The Unquestionable Truth (Part 1)’s rawer material into the latter, bland stuff. Durst swears a lot but it’s not like he’s dropping Hot Dog-style F-bombs, rather the frustrated expletives of a man yearning to be taken seriously. The Key’s funky guitar and rhythmic backbone are decent enough, but the record’s venomous message is lessened significantly through this track’s inclusion.

Durst’s lyrical nods to sex have always worked best when they’re tongue-in-cheek, like Nookie. Why was a cookie even brought into the equation? Nobody knows. It just rhymed. Point is, the inFredible D has always struggled when it comes to being serious and delivering lovelorn lines, The Only One being a prime example. When he tells us, “I ain’t lookin’ to screw on the first night, ‘cause that’s a no-go,” we already assumed it was a no-go because he just referred to it as “lookin’ to screw.” Aside from its painful lyrics, The Only One suffers from a bland Smith guitar job and verses that make Creed sound like Septicflesh.

“Satan gave this homeboy a licence to kill.” No, this isn’t a new Insane Clown Posse track, just the closing throes of Bizkit’s Killer In You. Borland’s guitar solo is an absolute winner but seeing as Gold Cobra was the band’s comeback record, using Why Try as the full stop may have been wiser. Because Killer In You is a bit pants; Durst’s fanciful tale of a killer roaming the streets is a laughable affair that’s neither knowingly ridiculous nor grim enough to evoke any feelings other than a wince and a quiet, “Oh dear.”

There’s a sizeable score of stinkers on Results May Vary, but Let Me Down is weak as piss leaking from a nappy. Borland is an absolute riff machine and his absence is painful here, Durst’s radio-bothering chorus backed by one of the most forgettable, washed-up guitar lines in the Bizkit back-catalogue. Granted, Otto is still a beast on the drums, and that saves Let Me Down from being downright cack and allows it to just be really, really dull.

Limp Bizkit can do ballads. Really. No Sex was great on Significant Other while the unexpected Walking Away remains a Gold Cobra highlight. Down Another Day, however, doesn’t fall into this category, its flaccid aspirations of Nickelback and Stone Temple Pilots lost somewhere inside Durst’s colon. Bizkit have always been a wildly original act (whatever you make of them, steady on), thus making this derivative ditty hard to swallow even today.

“Somebody better call the cops.” Yes, Fred, so they can arrest you and serve you a restraining order from that poor studio software. Durst’s autotuned delivery – it’s called Autotunage, geddit? – may have been an inside joke or whatever, but the fact that it slithered its way onto Gold Cobra is astounding; the record suffers from a mid-way slump to begin with, so sticking this on there really is the pile of shit on top of the concentrated pile of shit. Durst currently owns an edition-of-64 iPhone with a gold-embossed portrait of Vladimir Putin on the back – even that makes more sense than his escalating cry of, “Oh yeah-eah-eah!” that ends Autotunage.

August 1, 2014. That fateful Friday gave us a peek at what two of the 90s/00s groundbreaking acts were cooking up: Slipknot delivered The Negative One while Bizkit gave us Endless Slaughter. The former was an admirable effort while the latter was just, well, shit. For reasons known only to themselves, Limp Bizkit dragged us through six minutes of meandering madness that summer; Durst’s vocals range from cringe-inducing croons to Three Dollar Bill, Y’all$ as performed by Scooby Doo, Borland’s introspective noodling goes nowhere and the hip-hop climax is so damp you could raise a dispute with your landlord about it. Endless Slaughter is a journey, yes, but one of those journeys where someone farts in the car and you can’t open the window because it’s too cold outside. Just because you can play lots of genres it doesn’t make you the Dillinger Escape Plan.