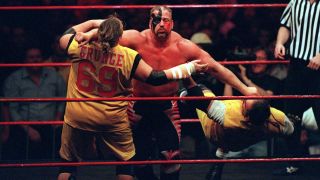 For several decades, the worlds of metal and professional wrestling have been one of the most inimitable tag teams in modern entertainment. Anyone who doesn’t think that a neck-snapping riff and a sweet suplex don’t go hand-in-hand clearly aren’t paying enough attention.

For years, the WWE’s biggest heel Triple H – real name Paul Michael Levesque – used to enter the ring to a riff-heavy instrumental penned by composer Jim Johnston. But as the man’s stock rose within the company, he decided to up the ante by roping in Motörhead to re-record his track and add some threatening lyrics delivered via Lem’s iconic growl.

CM Punk was one of the most outspoken and charismatic men to grace the squared circle in years. The straight edge, hardcore fan’s career has been soundtracked by the likes of AFI, Slayer, Hatebreed and The Bouncing Souls. Notably, he chose Living Colour’s 1988 funk metal classic Cult Of Personality during his WWE years. During his career, the wrestler – whose real name is Phil Brooks – has also used This Fire Burns by Killswitch Engage to herald his appearances. He’s also got a Rocket From The Crypt tattoo, which marks him out as a man with great taste.

The Undertaker has been a longtime fan-favourite, but when he first showed up at the WWE, his entrance music was just Chopin’s Sonata No. 2 in B-Flat Minor (or the ‘Funeral March’). Which is a bit dull and predictable. So when he transformed himself into his – and some might say ill-advised – ‘American Badass’ persona, it only seemed right that he’d use Kid Rock’s Metallica-sampling banger when striding into the ring. But, in all honesty, this was the only improvement during this stage in his career.

If you think that going ‘Oo-wa-ah-aaah!’ signifies the most pivotal moment in Disturbed’s career, then you may have overlooked the smashing glass sound that begins this track. This usually signals the entrance of The Texas Rattlesnake and the sound of thousands of wrestling fans smashing two beer cans together, while bellowing ‘Hell yeah!’ in unison.

While the Florida quartet might not be the heaviest band on our wrestling round-up, Mark Tremonti’s shredding guitar work and Myles Kennedy’s soaring vocals provide a worthy anthem which would usher in the arrival of the notorious Canadian wrestler Edge. At the time of writing, he has no affiliation with U2.

This absurd duo – Devon and Brother Ray – needed a wacky entrance theme for their time in the WWE. Enter the cartoonish, industrial nu-metallers Powerman 5000 – featuring Rob Zombie’s brother Spider One, er, Zombie – with a track that suited the dangerous table-smashing siblings down to the ground.

Sting – not to be confused with the well-spoken Geordie of Message In A Bottle fame– was the biggest star in the WCW for many years. When he tweaked his persona to a frightening Crow-style character, he needed some anthemic music to reflect his transformation. Enter young San Francisco rock hopefuls Metallica with their song Seek And Destroy, whose affiliation with the wrestler no doubt exposed them to a wider audience.

Although Pantera’s 1992 version would obviously be a superior choice, long forgotten 90s Rhode Island metallers Kilgore re-recorded this classic to usher in the high flying Rob Van Dam back in his ECW days.

As the official composer of the WWE, Jim Johnston has written some of its most memorable entrance themes. But has he ever written a riff as iconic as this? The riff that heralded in the tassel-sporting, rope-shaking Ultimate Warrior? It was a hypothetical question. He most certainly hasn’t.

The time has come. Your high profile wrestling bout is due to begin. Imagine standing in the ring ready to rumble. Your opponents enter the arena, two hulking great blokes in face paint and American football pads covered in spikes. What could be scarier? When Black Sabbath’s 1970 classic Iron Man is booming out over the PA. You’d almost certainly shit yourself.