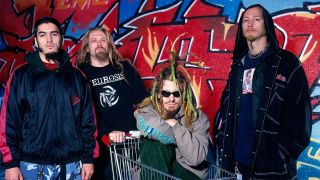 A razor-sharp epic about religious conflict dovetails into a righteous stomp about a Marvel comic anti-hero, as Megadeth set the bar high for 90s thrash.

Released just as the dogs of war were unleashed in the Persian Gulf, for many troops this song became the conflict’s theme tune.

The Bay Area’s most underrated band, Heathen were ready for glory with this labyrinthine crunch epic. Alas, the 90s had other ideas.

These game-changers weren’t thrash in the 80s sense, but the OTT energy and attitude of Fucking Hostile was total manic thrash to the max.

Preposterously brutal, The Crippler is as heavy as thrash gets, with its crazed bombardment of sheet-metal riffing, dentist-drill solos and sadistic lyrics.

Other songs on this album may have been more iconic, but when that madly Slayerized riff kicked in, it left absolutely no doubt that Bay Area veteran Robb Flynn could still cut the thrash mustard. Machine Fucking Head, indeed.

Testament’s all-star line-up fused the best of thrash past with millennial levels of renewal and excitement, the whole LP a thrilling end to a troublesome decade.