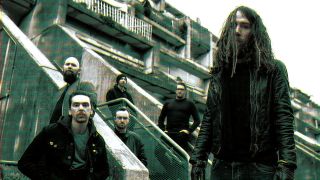 Sometimes Mikee Goodman sees demons when he’s walking down the street. Not like William Blake and his angels or the kid from The Sixth Sense who can’t move for dead people.

No, the demons Sikth’s co-vocalist and lyricist sees are metaphorical ones. It might be the gang of teens on the corner waiting to jump him or the guy passing by with a malevolent glint in his eye, thinking unthinkable thoughts. These are the demons Mikee Goodman is talking about. They might not have horns and fangs and flaming tridents, but the danger they offer is real. At least in his head.

“A lot of people don’t see danger,” he says, peering out from behind a waterfall of dreadlocks. “I see it everywhere. I wish I didn’t. It’d be a lot more fun.”

But then he also sees what he calls ‘Flower Beings’. These are people – sometimes, but not always, women – who… well, he can explain it himself. “They have a glowing thing about them. They’re really amazing, magical people.”

He addresses the demons and the Flower Beings on When It Rains, from Sikth’s new album, The Future In Whose Eyes? – their first in 11 years.

“It’s a poem asking if you have found love or if you can see beyond what is physical,” is his explanation. “Also, it asks if you are a person who reflects on their life a lot. Do you ever talk to the moon?”

Mikee Goodman seems like exactly the sort of person who talks to the moon. Not that you’d guess as much if you based your perception of him on the man you hear on record or see onstage: the intense, twitching dervish given to roaring, screaming and gibbering in a multitude of voices.

But that isn’t the individual sitting on a couch in a meeting room in his record company’s London office. This Mikee Goodman is friendly and engaged, one part shrewd, sussed singer, lyricist and video director, one part wide-eyed, hippie-ish space cadet.

“As humans, we find new ways to hurt each other on a bigger and bigger scale,” he says at one point. “Technology can be used for good, but also used for evil.”

Talking to him, you get the sense there’s a lot happening in his mind, and he’s working out some of it as he’s thinking it. And if there’s one thing that he does, it’s think. All the time, about everything. It sounds like it can be fairly overwhelming sometimes.

“The thing that has been playing on my mind for a long while is the extremity between the richest and the poorest people,” he says at one point. “Some of the richest economies in the world have such extreme poverty, and you look at it and think, ‘Why is this? Why wouldn’t you help these people when you have the power to do it?’”

He saw this poverty up close when the band played India in 2015. In Mumbai, he says he “felt sickened” by the some of the things he saw on the street.

“There’s little kids coming up, knocking on your windows. They’ve got despair in their eyes. You see people who are deformed – the most horrible deformities… I wanted to give them all the money I had on me, but you don’t know how to help these people.” He looks genuinely sad. “I’m in this swanky hotel, and all this shit is happening 20 seconds away. Me and my mate who was with me, we just went back and stayed in our room.”

There’s a lot of this kind of anger and despair on The Future In Whose Eyes? It’s there on No Wishbones (‘Yeah, they’re drinking cholera in their water / While they try to stay alive’) and Weavers Of Woe (‘This fear plants tears of misery / The profiteers, the mercenaries’), and in the album title – a comment on mankind’s “de-evolution”.

Mikee says he doesn’t have any answers, he’s just reporting what he sees. With anyone else it might sound naïve at best and a cop-out at worst, but his earnestness says otherwise.

After Sikth first split up in 2007, Mikee developed a form of OCD that manifested itself in an urge to constantly wash his hands. “I always have the handwash with me. Was it down to stress? Maybe.”

Sikth were very nearly the great lost British metal band. During the early 00s, they seemed on the verge of something – if not Big, then Important. Their twisted, schizoid explosions of anger and despair helped lay the groundwork for the prog-metal boom that would follow. And then, without warning, they were gone.

“I hated being in the band,” says Mikee. “We all did. We hated each other. It was toxic. There was no communication. It’s a big thing with young bands – if they don’t see eye to eye, and don’t communicate about problems, it just gets worse and worse. It was a terrible place to be.”

He tried different musical avenues – first an unlikely collaboration with Adrian Smith in Primal Rock Rebellion (“Adrian’s brilliant, we just used to sit around talk about football”), followed by the gloriously unhinged Outpatients (who later changed their name to Outside The Coma). Then, just as suddenly as they had split up, Sikth reformed in 2014. What changed?

“I matured,” he says. “And they matured. You start to really appreciate people being bothered to listen to your music and coming to see you live. It’s not like, ‘We deserve it, this is how it should be.’ That’s how I was in the early days.”

For the first two years after leaving Sikth, Mikee says that he “felt better than he’d ever felt before”. He’s referring to depression, which he’s battled with since his late teens. “I come in and out of it,” he says. “I’ve been in places that were quite dark.”

You get a sense of his trauma on the new song Cracks Of Light, which addresses a specific period in his life three years ago, between Sikth reforming and the band going back on tour.

“I couldn’t actually get out of bed for two days,” he says, without self-pity or a sense of aggrandisement. “I never experienced it so bad before that my actual bones started to hurt. That’s fucked.”

Does the band help?

“It helps and it doesn’t. Without doing music, I feel like something’s not there.”

Are you a workaholic?

“Yeah,” he says with a resigned shrug. “Pretty much. I’m driven, man. The thing is, I keep telling myself that I’m gonna do this until I’ve got enough money just to live on and do what I want to do and be creative. And then I’ll chill out.”

How’s that working out?

In the period between 2015 comeback EP Opacities and the new album, Sikth lost Mikee’s longtime co-vocalist, Justin Hill, and replaced him with Joe Rosser of British progressive metal outfit Aliases (the band formed by Sikth guitarist Graham ‘Pin’ Pinney during their hiatus).

“Justin left because he didn’t want to be in a band any more,” says Mikee. “We were, like, ‘How long can we go on trying to convince him to come on tour or play some other country?’ I’ve kept in contact with him, so that’s fine.”

There was little drama surrounding Justin’s departure, either in real life or on Facebook. The latter isn’t a surprise – Mikee isn’t a fan of social media. There’s a song on the new album titled Century Of The Narcissist? In it, he skewers today’s blank-eyed addiction to social media. “Everyone is desperate to have a voice, and it’s all just the same voice. It’s essentially not very healthy at all.” It’s a subject he’s tackled before on Philistine Philosophies, from Opacities, with a line about ‘condensing everything into a digital hole’. “Like I say in the lyrics, you either hop on the wagon or be a mystical tree.”

Are you a mystical tree?

He laughs. “I try to be a mystical tree, but my agent went on and on at me: ‘You’ll be left behind, no one will listen to your music any more because you’re not speaking to people.’ That’s the only reason I do it. And even then I only do the odd thing. That’s what I mean: I’m saying all this shit, but I’m still doing it. I just don’t do it very well.”

Social media seems about the only thing Mikee doesn’t invest heart and soul into. In the days after the interview, we get a series of emails from him covering everything from the meanings of his songs to clarifications of some of things we talk about. One of the emails suggests he’s been dwelling on what he said.

“Was probably the most intense interview I’ve ever done,” he writes. “I’ve been thinking about a lot of questions since then. You really made me think about life and how much I have been consumed by my work. It’s not healthy.”

And then he’s off, brain in overdrive, back to his demons and Flower Beings.

The Future In Whose Eyes? Is out on June 2 via Millennium Night. Sikth play Arctangent festival in August

As well as singing and writing lyrics for Sikth, Mikee’s been busy doing voiceover work for upcoming adventure game No Truce With The Furies. He explains his part…

The studio behind No Truce With The Furies describe it as “a police procedural role-playing game” – and Mikee plays the lead role. “The main character is this policeman who is corrupt, and he’s completely lost it,” he says. “I do the paranoid voices inside his head. They liked it, so they asked me to direct 40 voiceovers – 40 different people.”

He landed the gig thanks to a recommendation from Brighton indie-rock eccentrics British Sea Power, who are providing the music for the game (their violinist, Abi Fry, appeared on Sikth’s Opacities EP). After Mikee sent the game’s publishers the Sikth song When Will The Forest Speak, they signed him up to provide “a reptilian brain voice”.

The game is due out later this year, but Mikee is keeping tight-lipped about what’s involved, partly to avoid spoilers and partly because he doesn’t quite know himself. “Nah, they haven’t told me everything,” he says. “I can’t know everything, because they want to keep it a mystery. But I will say that it’s really warped…”

Sikth - The Future In Whose Eyes? album review