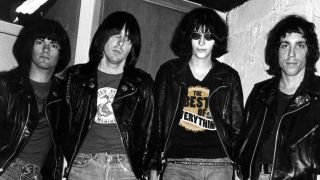 Marky Ramone joined the Ramones in 1978.

The drummer – born Marc Bell in Brooklyn, New York in 1952 – was brought in to replace founding member Tommy Ramone, who decided to step away from the drums during the recording of the band’s fourth studio album Road To Ruin.

Tommy stuck around to handle band management and co-production for that album, and would return again in 1984 during Marky’s absence to produce their eighth studio effort Too Tough To Die. But for all intents and purposes, by the end of 1978, Marky Ramone was the new drummer in America’s most iconic punk band – the Ramones.

He was on the road to ruin himself though, and the stress of relentless touring with one the most unhappy families in rock ‘n’ roll soon drove Marky from part-time partying to full-blown alcoholism. He left the Ramones for four years during the mid-80s to enter recovery, but returned to the fold in August 1987 after he got himself clean. Once there, he remained with them until their retirement in the summer of 1996.

The band of leather-clad anti-heroes was the perfect fit for Marky, too. By the time he joined their ranks in 1978, he was already a veteran of the American metal band Dust, and he’d played drums in two of New York’s pioneering punk acts, namely Wayne County & The Backstreet Boys and Richard Hell & The Voidoids. With his ‘blitzkrieg’ drumming style, he had the studio and the stage experience, plus he already dressed like them so he fit in perfectly.

We challenged Marky to pick his top 10 Ramones songs. Out of a list that includes over 150 tracks, here are the ones that made the cut…

ROCK ‘N’ ROLL HIGH SCHOOL (End of the Century, 1980)
Marky: “I have to include this one because of the movie, and my memories of school and what the premise of the movie was about – blowing up the school. Education is important today, and I feel that kids should stay in school because there’s a lot of competition out there now. But back then it was different, and for me personally, I hated school.”

THE KKK TOOK MY BABY AWAY (Pleasant Dreams, 1981)
“Contrary to popular belief, this song is not about Johnny stealing Joey’s girlfriend. Joey went to an institution and there was a black girl there who he became friendly with. One day she was gone, and he really liked her, so that gave him the inspiration to write this song.”

I WANNA BE SEDATED (Road To Ruin, 1978)
“This was the first song that I played on, so it’ll always have a special place in my heart. And it’s a very, very catchy tune – mainly because of that chorus.”

PET SEMATARY (Brain Drain, 1989)
“I like Pet Sematary obviously, because I have fond memories of dealing with Stephen King. He’s a great guy, and it was really cool being around him.”

ROCKAWAY BEACH (Rocket to Russia, 1977)
“This is just a fun summer song. The Ramones obviously loved the Beach Boys, but Johnny and I liked Jan & Dean better. They were a duo that a few hits back in the ‘60s, with Dead Man’s Curve and songs like that. We also liked the girl groups of the ‘60s too, like The Crystals and The Ronnettes. And the freaky songs like Wipe Out.”

BLITZKRIEG BOP (Ramones, 1976)
“This song obviously has to be in there. The chant is unforgettable.”

SHEENA IS A PUNK ROCKER (Rocket to Russia, 1977)
“I love the production of this one. It’s an oldies style song, with stacks of Marshalls behind it.”

MY BRAIN IS HANGING UPSIDE DOWN (BONZO GOES TO BITBURG) (Animal Boy, 1986)
“I like this song and it has a great chorus, but now it’s a little dated because it’s about Reagan and the politics of that time. But at the time it was a really good song. It was about him pardoning the Nazis from World War II.”

SURFIN’ BIRD (Rocket to Russia, 1977)
“I liked the way they approached this song. I always loved the original. It’s so insane. And the way the Ramones did it was really good, too. They certainly supplied the craziness with this one.”

I WANNA BE YOUR BOYFRIEND (Ramones, 1976)
“I love some of the ballads that we did as well. This song showed the other side of the Ramones. They proved that they could be softer and more emotional, and that it was OK for a punk band to sing about liking girls by writing sweet songs like this.”