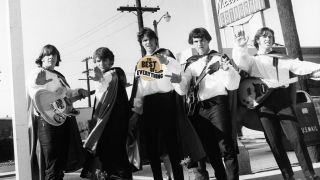 ROBERT PETE WILLIAMS – Levee Camp Blues (1960)
Jay Buchanan: ”This song was recorded by Robert Pete Williams when he was jailed in Louisiana in 1959 or 1960. It’s blues, for sure, but with a folk flavour. However you want to describe it, it’s just ‘got it’. It’s a protest song, about life in a levee camp. If you like storytelling songs, this is one of the best.”

EARL HOOKER – Blues Guitar (1961)
Scott Holiday: “He was John Lee Hooker’s cousin. His main claim to fame was recording Blues Guitar. Willie Dixon wrote lyrics for it, and the song became You Shook Me. Willie Dixon also recorded it as You Need Love, which was covered by Led Zeppelin [as Whole Lotta Love].”

JUDY MAYHAN – Rockin’ The Cradle (1962)
JB: ”Judy was part of the folk movement of the 60s; she was this just incredible soprano voice that at first reminded me of Joni Mitchell. Everything about Rockin’ The Cradle is terrifying. It’s so beautiful it’ll break your heart. I first heard it at the house of a record collecting friend right after our first show in London, at the Barfly.”

FAMOUS L. RENFROE (AS THE FLYING SWEET ANGEL OF JOY) – Children (1968)
JB: “Famous L. Renfroe played all of the instruments except for the drums on Children. The song itself is remarkable. It’s really lo-fi. Maybe you’d call it soul. The writing and the vocals are just okay, but it has an energy and vibe that makes it fascinating.”

Rival Sons will release a two-disc tour edition of Great Western Valkyrie on October 16 via Earache. The band tour Europe from November 8. For more information, see their official website.