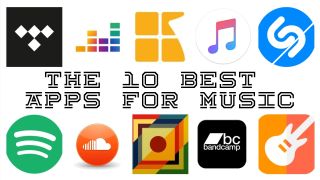 Sometimes, the world of apps seems impossibly overwhelming. For music fans and musicians especially, the abundance of available apps catering to seemingly every possible need can be incredibly difficult to sift through. Luckily, we’ve culled the herd down to 10 of the best, simplest and most useful apps on the market for fans and musicians alike...

I know what you’re probably thinking. A magazine subscription service? On a list of the best music apps? Hear me out though. Offering unlimited access to over 4,000 national and international titles for a monthly subscription of just £7.99, Readly offers unprecedented insight into the world of music. With unfettered access to hot-off-the-presses issues of top-of-the-line mags like Metal Hammer, Classic Rock, Prog, Guitar World, Guitar Player, Total Guitar, Computer Music, Future Music, Guitar Techniques and Guitarist, you’ll never miss the latest scoops on all of your favourite artists. Feeling nostalgic for the juicy interviews and behind-the-scenes looks of yore? You’ll also have access to all available back issues of these 3,800+ titles, making for an ample backlog of reading material at your fingertips.

Readly is lighting-fast, and features a simple but beautiful interface. Plus, you can use it on up to five different devices, so your whole family can enjoy the bevy of quality magazines Readly offers.

If you’re on the hunt for new music, there’s simply no resource on the planet like Bandcamp. Looking for the best and brightest talent in anarchist black metal? Bandcamp’s got you covered. Atmospheric ambient more your speed? With Bandcamp, you’re a click away from anything you could ever want in that sub-genre as well.

Featuring music from hundreds of thousands of artists and over 3,000 record labels—most of which are small, independent companies that exist far outside the corporate, major label system—the variety and scope of Bandcamp’s offerings is dizzying. Plus, with 80-85 percent of the proceeds of anything you purchase on the app going directly to the artist, there’s no better way to support the folks who create the soundtrack to your daily life.

Though Spotify and Apple Music still largely dominate the music streaming market, Tidal has overcome some occasional teething issues to establish itself as a force to be reckoned with. Its Hi-Fi, CD-quality streaming option offers breathtaking sound that you simply can’t find on other mass-market platforms. The app’s painstakingly curated playlists offer up under-the-radar artists right alongside your favourites, saving you time-consuming detective work. Finally, its noteworthy exclusive content — the two-week head-start it had on the fascinating 2019 posthumous Prince album, Originals, and its three-year exclusive on Beyoncé’s landmark 2016 album, Lemonade being just two — makes it worth a serious look in itself.

We’ve all been there. At a pub, restaurant, party or grocery store, a song rings out that makes us gawk awkwardly in the general direction of the location’s tinny PA system, wondering aloud “Wait, I know this song. What is it?!” Shazam, with its well-known music-detection abilities, exists to solve this problem. Even better, once it identifies the memory-jogging tune for you, it points you to where you can stream and/or purchase the song. As if that wasn’t helpful enough, it even provides the song’s proper lyrics!

The giant of the music streaming world, Spotify recently passed 100 million paying users worldwide, and with good reason. The size of its music library has few parallels, and — unlike its main competitor, Apple Music — it has a free tier through which you can explore its enormous catalog, albeit with ads. The free tier also allows users to make playlists of their favourite songs, either for themselves, for a party or for someone they wish to impress, and share them with one another. Its own playlist algorithms are famously accurate, and load up users’ playlists with familiar artists, and new ones they’re bound to enjoy as well.

Music streaming’s other major giant, Apple Music cannot be counted out of any music app-related discussion. Featuring an immense library of 30 million songs, and the ability to stream offline (when you download the music onto your device) Apple Music puts an incredible amount of sonic material at your fingertips. In addition, Apple Music gives users access to Beats One Radio and its litany of celebrity-hosted shows, and a host of other exclusive goodies. All in all, an absolutely essential app for anyone with a large music collection and a need for it to be portable.

Like Apple Music and Spotify, Deezer has an attention-grabbing amount of music—more than 50 million tracks in all. Deezer though, sets itself apart from its streaming competitors with its Flow feature. Flow takes everything you listen to, and creates a personalised mix of artists you’re already into, plus music you may not have heard before, but — with the accuracy of its algorithms — is probably right in your wheelhouse. Notably, Deezer also offers an upgraded HiFi subscription that allows users to hear ultra-high-quality FLAC versions of all their favourite music.  And there's exclusive interviews and playlists from Metal Hammer too!

Like Bandcamp, Soundcloud is a terrific way to discover up-and-coming artists who have not yet signed to a major label, or often, any record label at all. The social aspect of the app lets users follow their favourite artists, and create their own playlists. Of course, one of the main draws of Soundcloud—which sets it apart from every other app on this list—is how easy it makes for aspiring musicians to upload their own music and share it with the world. If ever there was an app that democratises music, this is surely it.

Apple’s ever-popular music making software, GarageBand is perfect for everyone from professionals looking for a quick demo, to beginners looking to experiment with their first recordings. Featuring similar interfaces on mobile and desktop, GarageBand allows users to loop a massive variety of instruments, or to record their own. The tempo, time signature and key are all adjustable, while the library of free effects for your recordings (or loops) is formidable. A cheap, high-quality studio in the palm of your hands!

Though it’s not the most advanced music-creation app on the planet, Musyc gets an inclusion for being fun and easy-to-use. Featuring a realistic physics engine and beautiful graphics, Musyc sucks you in from the get-go. The app creates music from drawn shapes, and how they interact with one another. Featuring 88 instruments and two effects channels, Musyc is perfect for those who visualise music as much as they hear it.

Subscribe to Readly: one monthly subscription for all the magazines you love.