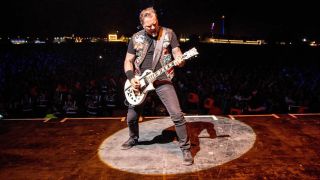 Metallica have always worn their musical hearts on their denim sleeves, celebrating the New Wave Of British Heavy Metal one minute, classic rock the next, then hardcore punk just to change things up. From Diamond Head’s Helpless, through Lizzy’s Whisky In The Jar and onto The Anti-Nowhere League’s So What?, the band have always given a shout-out to their many and varied influences.

Live performances, meanwhile, have delivered additional covers that are even more eyebrow raising. Metallica does Beat It, anyone? How about Garbage’s Only Happy When It Rains? Interesting… So here’s our take on 10 covers the San Francisco legends would be perfectly placed to tackle…

Now unless Hetfield sings the entire number with his nuts caught in the high hat, he’s never going to emulate Spark’s vocal Russell Mael’s hi-pitched vocal interpretation of this 1974 glam rock gem. But knock the voice back a couple of octaves and you can easily see Metallica giving this quirky little number a right musical bruising. The weird yet intense riffs, the odd time changes, the super-sneery lyrics – they’re all present and correct. Odd enough to catch the ear. Rock enough to touch your gut!

This riff-hungry monster from 1995’s ‘p.h.u.q’ album is five minutes and 45 seconds of the best mid-tempo grind and utterly irresistible vocal melodies you’ll ever clap ears on. There aren’t many riffs you can imagine Metallica really, truly wishing they’d written themselves, but this song contains four, maybe even five, that fall squarely into that category. Check out the point from 3.58 when guitarists CJ and Ginger lock and load right through to the track’s conclusion. Metalli-metal at its best!

The Knack - My Sharona

This pop punk leg-twitcher might not at first seem like a natural fit with Metallica’s primeval power. But listen to this 1979 US Number One and pay particular attention to the vocals. Don’t you hear Hetfield in his absolute element here, ripping through “ooh my little pretty one” with teeth-rattling menace. It’s true that Kirk Hammett would clearly have to rework the overly poppy guitar solo. But that’s mere detail. This one would clearly work a treat.

Judas Priest - Heading Out To The Highway

Yes, the Metalliboys have covered British metal legends Priest’s Rapid Fire before. But how about this for something so simple they could knock it out in five minutes in rehearsals, then blow our minds with a superannuated version? It has the chug, the groove, the daft vocal, the short twin guitar solo so Kirk and James can gurn knowingly at each other. Being road warriors themselves, this number surely amplifies Metallica’s work ethic. And Lars would love the deliberate slowdown at the song’s conclusion.

Elvis Costello & The Attractions - Pump It Up

Take this new wave classic, give it a good kick in the pants and get to work on the overdrive pedal. Hey presto, you’ve got a Metallica thrasher that sounds for all the world like an encore classic that could get even the most hard-to-please moshpit flailing wildly. You know the worlds make sense. “The party’s jumpin’ and the vibe feels so strong, Throw your hands in the air, Lift your head up high.” Let’s Metallicarise this little bugger immediately!

Imagine Metallica really stretching out, say around the time of the ‘Load’ album. Imagine Kirk letting loose with some slinky slide guitar. Imagine Lars playing just that little bit behind the beat to give the band some good old-fashioned groove. Well, what we think you’re imagining right here is Metallica paying tribute to Boston’s finest’s opening track from the 1979 classic Night In The Ruts. And correct us if we’re wrong here. But doesn’t it feel gooood?!

Are we allowed to point out the size of a woman’s over-reaching derrière in these politically correct times? Not sure, but if anyone can pull the non PC off it’s huntsman Hetfield, who would revel luxuriantly in this vocal-driven singalong that’s absolutely made for the kind of stadiums that are Metallica’s natural home. And can you imagine how much effort he’d put into delivering the call to action that is ‘GET ON YOUR BIKES AND RIDE!’? Who on earth would dare refuse him?

Now this one needs you to work your imagination a tad. So Metallica love those big orchestral interpretations of their big, big rock music. But they’ve also been known to show their sensitive side on songs like The Unforgiven. So give this quirky 1981 psychedelically-tinged pop song from ‘Doors clones masquerading as punks’ The Stranglers a big production, then have Hetfield sing from deep down in the soul. Voilà! You’ve got a guaranteed winner.

The Who - Won’t Get Fooled Again

We’re sure Metallica can afford a keyboardist to bring this Who classic from 1971 to life, and it contains plenty to keep Lars occupied trying to emulate Keith Moon’s extravagant fills. But the main reason why this song would work is that the original – brilliant as it is – is simply crying out for more rock’n’roll balls. The song has amazing dynamics, but could surely be so much more powerful. Put this in the hands of nasty old Metallica and it would retain all of its charm, while also turning into a raucous, snarling beast of a song.

We find it’s always wise to start a song with a ringing bell and police sirens wailing. The Ruts’ 1979 classic of street rage doesn’t miss the opportunity, but its incredibly taught riffing and spiralling guitar lines would sound every bit as immense in the malevolent hands of Metallica. Chantalong vocals would give the entire band a reason to step up to the mic to add a layer of pent-up anger and aggression to proceedings. No doubt that this would work bloody perfectly.