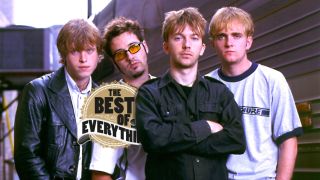 After leaving Mansun in 2003 following an ill-fated effort to reassemble for a fourth album, Paul Draper helped their label put together the compilation Kleptomania. After that, he says, he banished any thought of the band from his mind.

“I just forgot about it for quite a while,” he says. “It didn’t mean anything to me. I thought it was a pop group that would be assimilated into the history of many other pop groups that have come and gone over the years.”

But Mansun’s albums would outlast the band, particularly their surprising second album Six which was written in a fit of obstinate creativity after their label failed to deliver on promises around the scale of support they’d give their debut album Attack Of The Grey Lantern in 1997.

This, combined with excitement around Draper’s collaborations and productions –particularly with Catherine AD recording as The Anchoress – has brought Draper to the point where he’s able to release two EPs ahead of his first solo album, Spooky Action, in 2017. But for the moment he’s willing to look backwards, selecting 10 personal favourites from Mansun’s back catalogue.

“I haven’t chosen Taxloss or Wide Open Space or any of the really big ones,” he says. “Obviously people remember the video of us throwing away the money to show that we were a tax loss – which we did genuinely do – but that’s because the label never put out the single Disgusting, which was going to make a shitload of money. Instead, we were written off. It was just organised chaos. But it was remembered.”

Paul: “This started off as a song I wrote about Black Rock Sands, a beach in north Wales that we used to go to, but the lyrics seemed a little too specific so we made them vaguer so that they’d paint a picture. Prince or David Bowie could paint pictures with lyrics that weren’t too specific and that’s what I tried to do, move in that direction. I remember the verse and chorus were two separate pieces on the dictaphone – I’d keep things on dictaphones then bring them all up and listen – and glued them together, the two different bits that I’d done at different times. But as with everything I do, I write all my songs out of pure laziness. When I get to a chorus I have to go into this ridiculous falsetto. I wish I didn’t have to do it.”

“This song started out with a few chords and I was singing loads of melodies over the top. I found it really difficult to write a song with just two chords in it. I could do a song with three in it, that was easy, but two – now you’re asking. We had about fifty different melody lines. I remember saying to our guitar player, ‘I like this bit and this bit, but this bit sounds like U2’. He said, ‘No it doesn’t sound like U2. We’re keeping it in.’ And so I put a little jokey reference to Bono in the first line: “You travelled from Dublin, you said you’d change the world…” That was just our dark little sense of humour in that track. This became our biggest hit really, into the top ten and later covered by Blood Orange. An odd song, a track pieced together like a dance record, but I have relatively fond memories of it.”

“I was always looking for different directions and ways to play rhythm guitar, so you didn’t just do the same strum you naturally did. Serotonin came out of that brief. A chugging guitar riff. I’d like to start with different styles. Quite often I’d start in a James Brown or Prince kinda funky way – but I could never get away with it, coming from Liverpool. So here I came up with a very angular, new wave, odd riff. The song’s a maze of interconnecting riffs but inside there’s a very basic song which is sort of partly about where I grew up. It came to life with the arrangement and it’s probably one of the purest things we ever did. Off-the-wall, and without any reference to anything that was going on at that point in time in music. It’s just odd.”

“We did this with Howard Devoto from Buzzcocks and Magazine, who did lyrics and gave them to us. The guitar player from Mansun had a kind of Joy Division-inspired riff and I did the melody. My input was fusing the guitar part with Howard Devoto’s lyrics. It was an easy job – I wouldn’t say it’s the greatest melody ever – but on B-sides we were always freer, free to be who we wanted to be. Bands can have different sides to them. I remember Bobbie Gillespie, a very clever guy, saying that Primal Scream had their pop side to them but they also had their art-rock side. Mansun was very much like that. We’d do something like Taxloss which was obviously a parody of Taxman and we’d think we were being all leftfield and intellectual and sticking two fingers up to the establishment. Then we’d do our B-sides and it was just more naturally who we were, much more of a dark rock band.”

“This was going to be the big single from the first album. We were going to have a massive marketing budget and go around the world for 18 months on the back of open-top Ladas in Bulgaria throwing flowers to the crowd and stuff. But it was all pulled, and instead they put Taxloss out as a tax loss. I don’t know who fucked it up, but someone somewhere fucked it up. Disgusting never became a single. But that was supposed to be our biggie, the song that was going to break the band as a massive pop group. The whole thing disintegrated and we never ever played it live. But now I think it’s one of the better songs on the first album. I wrote it in about 20 minutes and it’s one of those rare moments of inspiration over perspiration.”

“Here I mean the full-length version. The original album version is alright, like a new wave, punky-type thing but the full-length version is brilliant, I think. The guitar playing’s brilliant, and I don’t know what it is, what type of music – I couldn’t even describe it. An odd, long-winded digressive piece of music with something about Communism and hating who you are and where you are, and Marxism and whatever baloney I was reading at the time. We were in Olympic Studios in London, in Studio One where Led Zeppelin and John Bonham recorded their drums. We got the drumkit and put it in the kitchen area, in a tiny little room, and recorded the drums completely dry. Andie Rathbone did a stunning piece of creative drumming on this track. It’s all about the drums and odd guitar sounds. I remember that being an odd direction for us to go, after being on the cusp of our pop superstardom with Disgusting.”

“This was originally called Desperate Icons but when we put strings on it we realised it sounded like a James Bond theme. We didn’t mean it to sound like a James Bond theme but it did, and we had all sorts of names going round like Chadfinger. I must have been about 15 or 16 when I wrote this, but minus the orchestral start. My song started where the lyrics come in: ‘All come crashing down, your desperate icon…’ That’s how it came about and we then went in with a big orchestra, who played it separately, and when we got to the mastering stage we glued it all together. It sounds like we were there with the orchestra but we weren’t. We pieced it all together, in true progressive rock style.”

“This was originally called Pentagram, as a joke, because we wanted to do a song with six different sections in it. Everything on the album Six has to do with the number six. Don’t ask me why – well, I do know why – I wanted the album to be about The Prisoner, who was Number Six, played Patrick McGoohan. We decided to do a song with six sections. We did a couple, actually, but renamed this Cancer after we did another song called Six. It’s a long story. But here, there’s a bit where I play the piano, there’s a bit of guitar playing, there’s a bit of Bowie influence, but it’s mainly us messing around in the studio with six half-finished ideas, really. We recorded it all from start to finish on a piece of tape, and we’d get so far on the track and come back the next day and think, ‘What are we going to do next?’ At the very end we go back to the original melody. It’s the single most complex thing we ever did, I think. That’s probably why people still remember the album – it’s just fucking bonkers.”

“This was a challenge I’d laid down for myself. Our manager had told me that any real artist would never do a track in any one particular style of music. That with real artists it only ever comes out of them like a conduit from God or something like that. Which I just thought was a crock of fucking shit. So I decided to do a song that had six completely different styles of music all blended into each other. I would say ‘seamlessly blended’ but it just sort of jumps all over the place. Then I argued that too could be a piece of art. But they said it wasn’t, and it all turned to shit. So I lost that argument – maybe in the short term – maybe in the long term people disagree. It starts off as a new wave track, then progressive rock, then jumps into a punk rock track, then Motown, then comes back into punk rock and ends on new wave. It just depends upon whether you enjoy it doesn’t it? I don’t think there are any rules, but apparently that was against the rules and there were all sorts of financial penalties and everyone said it was rubbish. I really did it because I was an angry young man and if anyone told me you couldn’t do something I’d do it. When we did the second album we were told, ‘You’re not allowed to do any prog rock on the third album.’ So the third album fades in for one second longer than Dark Side Of The Moon.”

“This was probably the best song I ever wrote for Mansun. All we’ve got is a basic mix. I wrote it on September 11, on the day the Twin Towers got knocked down. I remember waking up and watching the second plane go into the tower, and as you do, when you’re immersed in ‘being an artiste’ I picked up the guitar. There’s something about ‘keep on moving forward’. I think I was taking to myself. The whole world seemed to be imploding at that point – my own world and the wider world, on that day. I didn’t get the words right, but I re-wrote them in the studio. I think I have to have a spark for a song, and I think my spark on this was to move the chords every two beats in a bar, keep them moving round, which felt like more of a challenge. The band wanted to do it in the style of Neil Young, but they had their own reasons for that. And my song was my own. I think it’s one of the best songs – if not the best – I ever did.”

Paul Draper’s EP TWO is out now through Kscope.

Buzzcocks: 10 Of The Best