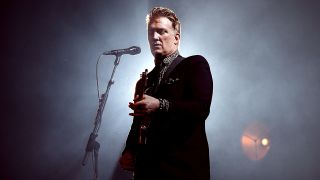 When discussing Josh Homme, it's unlikely you'll get too far into a conversation without words like 'prolific', 'busy' and 'multitasker' being tossed around – and with good reason.

Ever since founding stoner-rock pioneers Kyuss in the late 80s, Homme has picked up musical projects with a fervour that would impress even the most ambitious of magpies. Splitting his time between his "main band" Queens Of The Stone Age and collaborations with the likes of punk rock godfather Iggy Pop and British trip-hop outfit Unkle, he's also found time for supergroups with members of the Foo Fighters and Led Zeppelin, as well as any number of other projects with Trent Reznor, Primal Scream and The Arctic Monkeys. As the old saying goes, why have one band when you could have 10?

With such a predilection for new sounds and sonic landscapes, it's little wonder Homme has gathered a fanbase who pit him as one of modern music's essential architects. Among them are Lancashire stoner crew Sky Valley Mistress. The influence is clear from their name, but also from their sound, which is peppered with the sorts of doomy psychedelia Homme's first band made their own. If that wasn't enough, they also enlisted the help of Eagles Of Death Metal guitarist and producer Dave Catching to co-produce their new debut album, Faithless Rituals.

Here, the band talk us through the best songs from Dave Homme's career.

It’s at that perfect tempo between a stomp and a strut; the robot-rock rhythm section with Josh’s swinging guillotine guitar hook just oozes so much class. It’s the heaviest polka song you’ll ever hear. Dave Grohl ripping solos in the chorus, Josh firing back with the most awkwardly phrased solos backed up by string swells, the sexiest falsetto harmonies and a serial killing deer on the music video. It’s QOTSA’s biggest hit for a reason.

One of the greatest openers to one of the greatest albums of all time. I mean, we’re allowed to be biased with this one, right? Kyuss defined an era, a sound and created a genre that no one else has ever been able to replicate. This song is the pinnacle of it for all of us. It’s so perversely low, and Garcia’s vocals give it such a mean attitude. You can’t ignore it. The way they hang on such a slinky groove stops it from having that macho brute force that so many heavier songs have. You could ride down the desert highway at 100mph or have the filthiest motel sex to this song. Either way, put this thing on and just let it roll.

Kayley Davies (vocals): I couldn’t pay Homme-age (I’m sorry) and pick a favourite QOTSA song without feeling like I was cheating on another, so I thought I’d choose two tracks away from the band. I mean, this track just grooves! It’s a perfect example of the melodies Josh seems to create effortlessly and showcases his weird, haunting harmonies and smooth falsetto. I tend to favour the melody and bass line of songs more than anything else and this track delivers. I dare you to play this song and try not to strut like the cool bastard you are.

Kayley: You know when you’re a kid and mix your favourite sweets together and eat them all at the same time, and then realise it was the worst idea? I was scared of feeling that way when I first heard about Post Pop Depression, but I didn’t need to be. Bringing Iggy Pop and Josh Homme together makes a record different from anything they’ve created before, while keeping it slick and badass. Paraguay is a such a memorable track for me because it’s got everything in it that both artists are great at – Iggy’s straight-talking lyrics, Josh’s romantic guitar parts and again with the harmonies. Then at the end you’re hit with the cool as fuck breakdown, with a sweet guitar solo and Iggy screaming, telling you how much of a shit you are. The only thing I hate about this record is that I missed out on tickets when they toured with it.

Queens Of The Stone Age - The Fun Machine Took A Shit And Died (Single, 2007)

Maxwell Newsome (drums): There’s such a history and mystique to this track – from the music, to its release, to how its evolved and mutated when they play it live – that I personally believe it's the most QOTSA song Josh has ever released. It’s also the reason why we put an interlude on our record using the Fun Machine at Rancho.

Originally it was put in the liner notes of Lullabies... as a missing tape, then an early version was given to fans as a 7” for a gig they missed, then it was put as a bonus track for pre orders of Era Vulgaris. The music speaks for itself, starting like an eerie carousel and taking you through the strangest fairground ride of time changes, intricate parts and syncopated hits. All that with lyrics like 'You’re 10 pounds of shit in a five pound bag' that Josh doesn’t sing live anymore... This song makes you ask so many questions and answers none of them and still leaves you satisfied. If that ain’t trademark Baby Duck I don’t know what is.

Maxwell: Basically the Desert Sessions is probably the coolest thing Josh has ever come up with and if you don’t know, now you know. Every record is dense with killer jams from some of the most badass people in rock'n'roll. I remember being a teenager and getting deep into the desert music scene, and this was one of the first things I found. I couldn’t get over that this was where I was starting. This track is named after a Mad Max reference and has both Bjork and Hernández from Kyuss drumming on it?! That’s before the riff that drives this thing has even kicked in. And it is just fuckin’ mean. Like fuckin’ real mean. I’ll never get tired of this song.

Starsky (guitar): The original Desert Sessions version has a rawness that shows it’s a great song at the core, but for me the definitive version comes from Homme turnin’ the screws for it to make the cut for Era Vulgaris some four years later. It’s always fascinated me how it never made it on Lullabies To Paralyze – considering how long that album is – and why it eventually made it onto Era, but it deserves its place as the centre piece of that album. And let’s just talk about the mix for a second – it’s pretty damn close to perfect. Not just up there as one of my favourite QOTSA songs but a strong contender in my all time favourites. It’s my go-to track.

Starsky (guitar): Throw away the rule book on how to open a banger. Three different riffs move through three contrasting grooves before the vocals even come in around 1:30. A series of twists, turns and the smoothest of variations, together on an endless groove with Josh’s almost signature lower harmony to boot. It’s a guitar solo short of having it all. I mean, a band made up of Homme, Jones & Grohl was never likely to disappoint, was it?

Russell Russell (bass): This was the first Queens album I listened to in full, because it came out at the time I first started listening to them. This track is a fucking ballad. It’s one of them that just sets the vibe where you can throw a record on, close your eyes and just go somewhere else. It’s so haunting, yet inviting at the same time. The music video is fucking great too.

Russell Russell (bass): When we went to Rancho de la Luna to record our album we stayed in LA for a couple of days after recording. This track was playing as we entered LA, so that record just reminds me of that. It’s such a feel good track and you can’t help but dance to it when when it comes on.