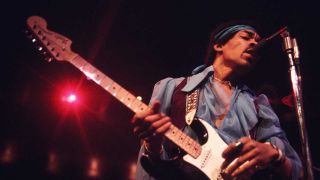 Now Bones and Vandenberg have released their own album under the name Bones UK. It's a seductive blend of thumping industrial beats and savage, riff-heavy rock'n'roll, but despite the album's modern electronic leanings, it's Vandenberg's guitar that drives the music.

That's hardly surprising: she's a Jimi Hendrix nut, and it shows, with the album dotted by fuzzed-up blues riffs adorned by squealing solos.

Bones UK are currently supporting The Struts in The US. Bones UK is out now.

"Lyrically and sonically, a beautiful piece of art. It's definitely Jimi's fault I became obsessed with playing guitar. It's also the first Hendrix song I ever learnt how to play, and has a special place in my heart. I love hearing a bit of Curtis Mayfield influence in there."

"I love his version, one of my favourite songs of all time. I do also adore John Mayer's version of it.

"The whole of Axis: Bold as Love in a masterpiece. The lyrics highlight all the different shades and colours that love has, and how hard it can be to both have love or yearn it."

Castles Made of Sand

"The storytelling in this song is incredible, and the metaphor to castles made of sand brings back childhood memories of dreams of playing music. His storytelling shines through lyrically, but also simply by his guitar playing."

"The way Jimi made this song his own and laughs during the recording! I would do anything to have been there and witnessed that show. It brings me much happiness."

"Hard to even explain why this one is so good it just is. I also remember busking this song over and over through the streets of London with my best friend Django Stewart when we were 15.

"We'd play for couples outside of pubs and ask them to buy us beers instead of giving us money coz we were too young to enter."

"I prefer the slow version. The vocal and guitar unison line is a staple song for any guitarist. I love how it evolved from the original song Catfish Blues which (if I'm not mistaken) was a homage to Muddy Waters (another hero of mine). You can hear the Chicago blues sound but with a twist.

"I absolutely love the harmonic progression in Little Wing. The solo is also so iconic - one of the most iconic of all time. One of the beautiful things about Jimi, and Little Wing especially is you can hear his songs, his playing today and it's still fresh, still surprising.

"He's truly timeless and listening to his work makes me speechless sometimes."

"This is a funny one for me. When I first heard this, heard about the song, I was confused. I know Jimi had plenty of misgivings about America and her politics (needless to say I do too), and it seemed like the last song I'd hear him play.

"But when you think about the way he approached the song as a protest - and the time, the context he did it in - it's really incredible. One of the examples of music as peaceful protest."

"This song is a staple Hendrix song. Iconic for its guitar riffs and tones and what I feel like kicked off the psychedelic rock era.

"Funny enough when I first moved to England to study I was in a covers band called Mayfair Haze. We used to open the set with this song. One evening in some small pub in Surrey a gentleman named Roger Mayer was in the audience.

"This man is the man that invented the Octavia pedal for Jimi. Together I feel they changed the way a guitar sounds for the rest of history. It pushed all boundaries and brought us somewhere new."

All Along the Watchtower

"Lyrically a beautiful song. Dylan did a great job of writing this song to shine light on values. I feel so many emotions when I listen to Jimi’s guitar sing, and I think this version provides more of an intense vibe.

"It is simply structured as there are only three verses and no chorus. But because of this simplicity, I feel like the drama in the song shines through even more and expresses the questions of values.

"I enjoy how the third verse of the song provides the listener with a certain amount of imagery that was not there in the others. Anything Hendrix touched became a masterpiece."