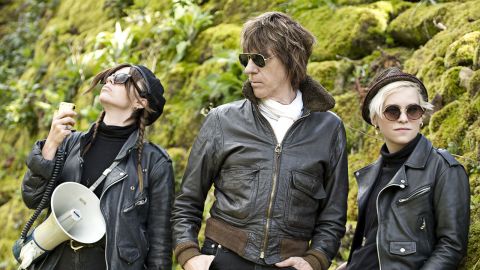 It’s rare that Jeff Beck does the obvious when it comes to guest vocalists. He may be one of British rock’s most revered figures, but cosying up to bankable superstar divas clearly isn’t his thing. His last album, 2010’s Emotion & Commotion, featured the largely untested Olivia Safe, while its 2003 predecessor Jeff made room for actress Ronni Ancona and Vic Reeves’ missus, Nancy Sorrell.

Recruiting such relative unknowns might invite its share of risk, yet Beck seems to thrive in this young company. Loud Hailer is a big, bold record that finds the 71-year-old in dynamic form, peeling off licks and rhythms with purposeful intent and remarkable finesse. It’s an unusual album in the Beck canon too, with Bones’ presence on nine of its 11 tracks turning it into a sustained collaboration.

Striking opener The Revolution Will Be Televised hitches some fiery riffage to a fat groove and a scathing lyric that reboots Gil Scott-Heron’s polemic for the Grand Theft Auto generation. Thugs Club fans out into a vicious rocker that swipes a paw at the hubris of big business, while Live In The Dark offsets Beck’s squealing virtuosity with a huge EDM beat. Pull It is the pick of the two instrumentals, a howlingly distorted guitar line chopping loose over another electronic bed.

It’s fair to say that Bones, who also happens to be the daughter of Bill Oddie, is an acquired taste. Her Cockney-urchin delivery feels mannered at times, and is particularly grating on Thugs Club and Right Now. She’s more convincing on The Ballad Of The Jersey Wives, a cry for justice and transparency based on the 9⁄11 widows who took their cause to Capitol Hill. Or on the gentler Shrine, which brings a restful tone to an otherwise inflamed album that finds Beck unloading his irritations with modern life: fat cat bankers, corporate greed, reality TV, crumbling eco-systems.

Lyrically this has all been done better before, but it does show that Beck is fully engaged with the world. Moreover, Loud Hailer’s often stunning tapestry of vampy rock, funk, Southern blues and wah-wah wizardry proves that all of his considerable faculties are as sharp as they ever were.