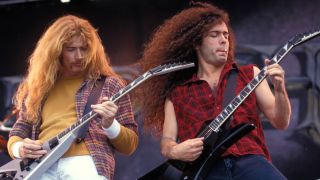 “People know me as a bass player,” says Leclercq, “but my main instrument is actually the guitar. I’ve always been playing guitar, and as a matter of fact, I actually play guitar on DragonForce’s albums. I do a lot of rhythm guitar and some occasional solos. I also play keyboards, and I try to play drums – but I suck.”

Here, then, are Leclercq’s top 10 rock and metal guitarists of all time…

“I remember when I was growing up all the guitar magazines used to say that he couldn’t play and he was shit. I remember reading a French magazine once and they were talking about the first Poison album [Look What The Cat Dragged In, 1986], which they said was the same as Mötley Crüe but their guitar player could actually play. But that was around the time that I was first starting to play guitar and I wasn’t fussy about his technique, I just enjoyed listening to the songs and his solos. He may have done the same solo quite a lot of times, which you hear on songs like Ten Seconds To Love and Smokin’ In The Boys Room, but I still love them. He’s got a lovely tone, and he still goes out on stage and rocks even with the awful disease that he has, so he’s legendary in my eyes. And he also really influenced the way I play guitar. He helped me develop what I’m doing right now, and he wrote great riffs, so I have to credit where credit’s due.”

“Another one of my favourite guitar players is Kee Marcello, who used to play in Europe. He might seem like a strange choice, but I grew up listening to the band and he influenced me a lot.”

“Next on my list is Trey Azagthoth, simply because Morbid Angel are my favourite death metal band and one of my all time favourite bands, ever. And I love his riffs; I’ve always said that in another band what he does would sound silly, but for some reason the way he plays and places it, he makes it work and it’s evil as fuck. And even though they’re my favourite band, I don’t think I’m able to play one song correctly. That’s the funny thing; of all the bands I listen to and love, Morbid Angel is still a mystery to me. I know all the songs but I can’t play them, and I can’t explain why. Again, he’s from another planet, and he’s a huge influence when it comes to death metal.”

“I have to give credit to Dave Mustaine as well. I had the chance to see him at the Golden Gods, and he’s another amazing singer, guitarist and songwriter. One of my proudest achievements is being able to play and sing Holy Wars at the same time, and I do that sometimes to show off to my friends.”

“I can’t do a list of my favourite metal guitarists without mentioning James Hetfield. He’s the riff master. I have no idea how he plays and sings at the same time. His riffs are legendary.”

“Jeff Waters is an amazing guitar player with an amazing right hand. One of my first ever gigs was watching Annihilator in Belgium, and I watched the whole gig from the first row. I think their first five albums are incredible. His soloing is amazing too, and you can put on one of his tracks and know in just a few seconds that it’s him. I can pick up my guitar and do a Jeff Waters, and I know exactly what I’m going to do. He’s a great guy too, and I had the chance to jam with him on the 70000 Tons Of Metal cruise. I was on bass and he was on guitar, and we played Blackout by Scorpions.”

“Uli Jon Roth is another one of my favourite guitar players, especially for what he did back in the day with Scorpions. He’s got his unique way of making the guitar cry, particularly on songs like Living And Dying off the In Trance album [1975], and also a song off Taken By Force [1977] called The Sails Of Charon. I know that Yngwie Malmsteen did a cover of that one, and he’s a great guitar player too, but even he’s not as good as Uli Jon Roth. I had the chance to meet him three times; the first time I was drunk and I felt like a complete idiot the next day, then I met him again and the same thing happened, and then we did a cruise together last year where I was finally sober, but only by default because I was sick and I couldn’t drink. I went over to him to say hello and he was like, ‘I remember you, you were really drunk the last couple of times we met.’ So I finally got to talk to him properly, and he actually came and watched our show by the side of the stage. I was on bass because it was with DragonForce, but I managed to play a bit of one of Scorpion’s songs off In Trance and he got it. I’m still a child when it comes to little things like that. Uli Jon Roth is an amazing guitar player, and he also influenced the third one I’m about to talk about, which is Marty Friedman”

“These first three players that I’ve mentioned are all great melodists – even though I don’t think that’s a word – and they all play guitar melodies that you can sing. I think that’s very important. I love everything that Marty Friedman has done, both with Megadeth and also Cacophony and all his solo stuff. His playing is really unique, and he’s the one that got me into Japanese music with all the exotic scales that he uses. I still have no idea how he does all that picking with his right hand either; his range is disgusting. What an amazing guitar player.”

“From ‘melodists’ to aliens, next up is Alan Holdsworth. He’s not a metal guitarist as such, but I got into him by listening to Pestilence and it doesn’t get much more metal than that. I should start by mentioning the guitar player from Pestilence, which is Patrick Mameli. I love death metal, and what Patrick Mameli was doing on Testimony Of The Ancients [1991] was so interesting and progressive for that time. When I saw the ‘Thank You’ list in the album sleeve one of the first musicians that they mentioned was Alan Holdsworth, so I asked a friend of mine who was into jazz-fusion to lend me one of his tapes. It’s definitely not easy listening; my girlfriend hates it and a lot of people react the same way because it is music for musicians. But he is such an incredible musician. He’s from a different planet. And he’s very humble whenever you see him in videos. If you’re interested in checking him out I would recommend you get the album Atavachron, which was released in 1986. I think I’m a good guitar player, but when I pick up my guitar after listening to that album I feel like putting it back down again because he’s just so good. He’s beyond good.”

“I grew up listening to Iron Maiden and you always had to pick one as your favourite. I think I started liking Dave Murray more because he was more flashy and fast, whilst Adrian Smith was more at the back. But it turned out that I preferred Adrian Smith’s bluesy style, and I loved his tone and the solos that he did on tracks like Stranger In A Strange Land [Somewhere in Time, 1986] and Prodigal Son [Killers, 1981]. DragonForce did a festival a while back called Nova Rock in Austria and he was just there hanging out. He passed me by and was just like, ‘You alright?’ Now I don’t usually get star struck, and I’m usually fine with meeting people, but this guy really influenced my way of approaching the instrument. He’s probably my favourite guitarist ever.”

Power Metal: The Genre That Refuses To Die!