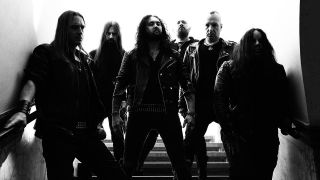 While Joey’s new band Vimic represents a beefed-up reboot of Scar The Martyr, he’s also been behind the kit for a second, brand new band – Sinsaenum. The brainchild of Dragonforce bassist Frédéric Leclercq, it’s a more murky blend of death and black metal, featuring the twosome alongside some of the leading lights of the extreme scene, including dual vocals from Mayhem’s Attila Csihar and Dååth’s Sean Zatorsky. We asked Frédéric what the supergroup have planned for their dark future.

How did Sinsaenum first come about?

Frédéric: “Oh Christ, even I have trouble remembering when it started! I always wrote death metal songs. I started to write in 1998, then I was doing something else [he played in the French bands Memoria and Heavenly], and I’m still doing something else, with Dragonforce. The first person I spoke to was Stéphane [Buriez, guitar] from Loudblast. It must’ve been in 2010 that we said, ‘Let’s really do something about it.’”

How did Joey get involved?

“I kept writing more songs, and one day in 2013 I got a text from Joey. We call each other ‘Morbid Angel’ – don’t ask why – so the text said, ‘Morbid Angel, what you up to?’ I was like, ‘Well, I just got back from tour… talking about Morbid Angel, I have these death metal songs.’ He was like, ‘You should send them to me!’ Two days later, he came back like, ‘Fuck yeah, that’s really cool. Who’s playing drums? I want to do it.’ So I started to ask more people that I had in mind.”

How did you guys meet?

“We did the Mayhem tour together in the US, in 2008. One day drinking we were talking about death metal, and then we got talking about it more and more. That’s how you get to know people – you find what you have in common. We had drinking and Morbid Angel.”

What about the other guys?

“Stéphane I’ve known for 20 years. I played in a band in my hometown, Charleville-Mézières, and we supported his band, Loudblast. They were a big influence, and the first death metal band I heard. We kept in touch because France is a small country when it comes to metal. With [bassist] Heimoth from [French black metal band] Seth, it’s the same – there’s a small metal community. Dragonforce and Mayhem did a festival together, and Attila came onto the bus and said: ‘My son is a fan and would love an autograph – by the way, I’m the vocalist of Mayhem.’ He’s such a nice person – maybe you shouldn’t write that, keep the mystery! Sean and I met when Dååth was opening for Dragonforce in 2009. I really liked his voice and his attitude.”

How much was written before you started working with them?

“When Joey sent that text, all the songs were half-written, because I’ve a tendency to write a song with just a verse and a chorus, maybe a mid-section, because I know the rest is in my head. So when he said, ‘I’m interested,’ I was like, ‘Oh shit, I have to finish the songs!’ I sent out files, because it was clear that people trusted my ‘vision’. They didn’t want to change too much. I had to finalise lyrics with Sean and Attila, and Stéphane contributed to the structure. Joey added some fills. I decided to make it a concept album using interludes like Tiamat, or Pestilence, or even Type O Negative did to create atmosphere, so I had to write those.”

“I felt like a kid in a toy store! Being in a studio with Attila singing songs that I wrote, and saying, ‘Oh, you should do this song like [Mayhem’s] De Mysteriis Dom Sathanas, and him being like, [adopts a Hungarian accent] ‘OK bro’, it’s like, ‘Fuck, this is happening!’ I shouldn’t sound so excited, ’cause this is black and death metal, but I had a big smile during the whole process – we all did. On Army Of Chaos we have Schmier from Destruction and Mika and Mirai from Sigh. Mika and Mirai are good friends of mine and are doing the big choirs, the choruses… like Sepultura’s Stronger Than Hate [from 1989’s Beneath The Remains]. I remember reading the booklet as a kid… they had the guys from Obituary and Atheist on it, and I was like, ‘Fuck, that’s cool.’ And it’s Schmier who’s singing on the last pre-chorus.

“Not at all. He speaks about it way better than I, so I won’t comment on that. I’ve kept away from all the troubles. I was like, ‘I’m a friend. If you want to talk, I’ll listen, but I just want to make sure you’re happy.’ As far as health problems, he was fine – he killed the drums. I don’t know how he did it, but he said, ‘Dude, I’m on fire.’ He was angry, I guess.”

“It’s definitely something we want to do, but there’s no rush. I want to do everything the same way I lived it as a kid. These bands I loved, I loved their albums, but I didn’t see them live for a long time and it didn’t bother me. I want people to digest the album – there’s a lot of information on there. Plus, we’re all busy; it’s difficult to get us all in a room. We rehearsed before doing the videos, and being in the same room, it was like, ‘Fucking hell.’”

“We’re doing summer festivals and writing the new album that will come out next year, so I have to juggle between doing Sinsaenum stuff and writing and recording with Dragonforce. So my head is about to explode, but that’s fine!”

What do you get from Sinsaenum that you don’t get with Dragonforce?

“This is really the music I love. I like Dragonforce stuff, and I write more of it now, but sometimes I don’t agree with all the decisions. With Sinsaenum, from A to Z it is exactly what I want. I guess it’s my baby. It gives me a way to express the dark side of myself and show it to people – if they care or not, that’s another issue!”

Sinsaenum release Echoes Of The Tortured on July 29 via Earmusic

Track by track review: Sinsaenum – Echoes Of The Tortured