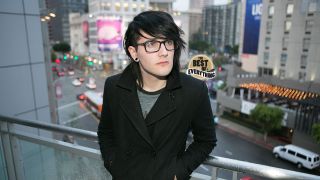 SayWeCanFly – the one-man acoustic act known to his friends and family as Braden Barrie – hails from Lindsay, Ontario.

With a following of over 1.2 million followers on social media, he caught the attention of Epitaph, who recently released his latest EP, Darling. Here, he picks the 10 emo anthems that have informed his own work…

“I’ve always been in love with sad music,” says Braden. “There’s something incredibly attractive to me about broken hearts and dark imagery that everyone gets. Whenever someone called me an ‘emo’ in high school, I always took it as a compliment”

UNDEROATH – Some Will Seek Forgiveness, Others Escape (They’re Only Chasing Safety, 2004)
“Underøath will forever be my all time favourite band. Their music has spoken to the deepest part of my soul in a way nothing else has. I’ve had the honour of meeting both Aaron [Gillespie, drums/vocals] and Spencer [Chamberlain, vocals] on different occasions.”

SECONDHAND SERENADE – Vulnerable (Awake, 2007)
“This album was the one that got me into acoustic music. Secondhand Serenade will always define emo acoustic music to me. It was the first time I felt like it was okay to have my heart broken.”

MY CHEMICAL ROMANCE – Cancer (The Black Parade, 2006)
“What more needs to be said? Sometimes I like to cry.”

NEVERSHOUTNEVER – Hummingbird (The Summer EP, 2009)
“The very first song I listened to on the internet. I accidentally clicked on a link to this song in PureVolume and was introduced to the scene world. This song made me want to find a way to get out of my town and make a living with my guitar.”

RELIENT K – Getting Into You (Two Lefts Don’t Make a Right… But Three Do, 2003)
“This was the very first CD I ever bought. This song was also one of the first I ever learned on acoustic guitar. I played it at my Grade 8 graduation ceremony – it was the first time I ever sang in front of more than just my mom.”

MAYDAY PARADE – Three Cheers For Five Years (A Lesson In Romantics, 2007)
“I used this one to ask a girl out on a date back in the day. It worked.“

SCARY KIDS SCARING KIDS – Watch Me Bleed (Scary Kids Scaring Kids, 2007)
“This song helped me through my first break-up. It’s literally the only song I’ve ever listened to by this band, but I listened to it probably a thousand times in a row when I found it.”

SAOSIN – You’re Not Alone (Saosin, 2006)
“I always listened to this one when I felt alone. Sometimes a dude from a band saying you’re not alone makes you feel okay.“

AUGUSTANA – Boston (All The Stars And Boulevards, 2005)
“This is one of the first songs I ever learned on piano – that melody! It always made me feel like time was slowing down and I was on some epic journey to win the heart of a girl or something.”

THE ICARUS ACCOUNT – Mayday (Mayday, 2008)
“I fell in love with this band as soon as I heard this song on MySpace. I had the honour of playing show with them in my hometown, and eventually became super tight with both dudes. I even got one of them to do a song with my on my first legit EP. I cried happy tears.”

SayWeCanFly’s EP Darling is out now through Epitaph. A UK tour will follow in February. For more information, visit the official site.