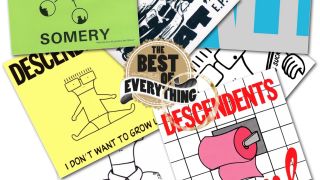 The Descendents were before my time – they started in like ’78 and I was only born in ’79 – so I kind of missed them on the early boat, but the first record I bought by them was ‘Somery’ [a compilation album by the band released in 1991] in ’92 or ’93. I remember I had it on cassette and my friend Lisa and I would put that tape in every day after school in her 1956 Ford Valiant. It was a piece of shit, beat-up car that smelt like cigarette smoke, and we’d cruise around in it listening to that tape. If we ever had a bad day, it would instantly turn our frowns upside down.

They were the first pop-punk band I’d heard. They wrote short, fast, melodic songs and they made it OK for a punk band to sing about girls, relationships, and things that kids were dealing with living in the suburbs. And that’s cool because they were a band that came from the suburbs. They weren’t a band that came from the streets of New York or London. They were from the suburbs of Colorado, and I think that was what a lot of people my age group liked about them, because we were all angsty teenagers dealing with the same kind of things. We weren’t worried about a coup happening or militia groups trying to take over our village. The things we were concerned about were our girlfriends dumping us, or what we were going to do on the weekend. That was what the Descendents wrote about, and it was awesome – I guess they’ve been an influence on the way New Found Glory have structured songs over the years.

Here then, are my top 10 Descendents songs…

10. EVERYTHING SUX (Everything Sucks, 1996)
This record came out in the ‘90s, and there hadn’t been a Descendents record for a really, really, really long time. It came out on Epitaph, and it totally reminded you why Descendents were a band people loved. They hadn’t lost their touch at all during those years whilst Milo [Aukerman] was away, and the second this song comes in it sounds awesome.

9. I LIKE FOOD (Fat EP, 1981)
This was the first goofy song I heard by any punk band. It was like 15 seconds long – or however long it is – and it’s just them talking about how much they like food. I’m curious about what their peers thought of it at that time, because punk and hardcore was such an aggressive thing back then. Then Descendents come along with a song that is fast and aggressive musically, but it’s talking about how much the band love to eat! I wonder what Henry Rollins thought of this song when it was released.

8. MY DAD SUCKS (Fat EP, 1981)
This song short, fast, and tongue-in-cheek like a lot of their stuff. And it’s super catchy, like all of their songs. And it’s talking about something that everybody deals with as a teenager; I don’t think I ever really hated my dad, but I could definitely relate to this song growing up as an angsty kid.

**7. GOOD GOOD THINGS (I Don’t Want to Grow Up, 1985)
**‘I’ve been thinking good good things about you, duh-duh duh-duh.’ It’s so good, man! You’ve got me thinking all about these songs now and I’m going to listen to them all when this is done. Talking about them like this, I actually feel like I’m in the Descendents right now and it’s awesome! As far as vocal delivery and making the lyrics in your songs emotional and all that sort of thing, I definitely think Descendents helped coax those feelings out of me when New Found Glory was starting out. With a song like Good Good Things, the verses are all driving and then this great catchy chorus comes in.

6. CLEAN SHEETS (All, 1987)
This is great song. Again, it’s so catchy. What I get from it is that it’s basically Milo talking crap about a girl. This was another Bill Stevenson song too. He wrote a lot of the Descendents’ songs, and that’s super rare to have a drummer write so much of a band’s material, and it all be so great.

5. SOUR GRAPES (Enjoy!, 1986)
This is another kick ass song about dealing with day-to-day things as a kid. Like a lot of these tracks that I’m picking, it appears on the Descendents compilation albumSomery, which is the first record I heard by them and it’s the one with all the catchiest songs on. If you want an introduction to the Descendents, I feel like that record is the best place to start. It’s certainly where my love of the band began.

**4. I DON’T WANT TO GROW UP (I Don’t Want to Grow Up, 1985)
**I still feel like I haven’t grown up. I have two little kids and I’m a responsible parent who tries to teach them important lessons and good things, but being a dad also eggs on my obsessions with kids’ stuff. I took my four year old son to see that band The Aquabats recently – they’re a great band and Travis Barker used to drum for them a long time ago – because he loves their TV show, and he’s in to wearing the helmet and the goggles and the full get up that they wear. And I love all that. No matter how old I get, I can’t see myself ever growing out of that stuff. So this song speaks volumes to me still to this day. Don’t get me wrong, there are days when I feel old and I get stressed out like a parent should do, but I sometimes feel I haven’t grown up at all

3. VAN (All, 1987)
I obviously relate to this song after years and years of being in a band and touring in a van with a bunch of smelly dudes farting and burping, and leaving their shit everywhere – myself included. So this one has to be way up there for me. I remember on our first ever tour, we rented this box truck and we were touring around and sleeping in the back of this thing. We drove for days from Florida to this show in Pennsylvania, and we were stoked because we thought it was like our first proper show and Catch 22 was supposed to be on the bill. We showed up and there were two people there, and Catch 22 wasn’t playing. And the two people that were there were the two girls who had arranged the show. I can’t remember exactly what happened, but it was so funny because there were two other bands that were with us on the tour and we basically all set up and rehearsed for each other, with just these other two girls watching. They invited the band to come and stay the night at their place, which we were excited about because it meant we could shower and sleep in a bed and stuff. When we got there, there were dirty diapers with flies in the corner, and every bedroom had mouldy carpets and graffiti on the walls. I was like, ‘Well, looks like we’re sleeping in the van again!’

2. SUBURBAN HOME (Milo Goes to College, 1982)
Descendents took these really relatable topics and you feel mad with them at whatever they were singing about. I don’t know if Milo’s being sarcastic or not when he sings about having a home in the suburbs just like mom and dad, because now he probably does have a nice house out there. If he was actually being serious, that would make the song even better for me. But he was probably more likely to have been singing about it sarcastically, and saying that he didn’t need that kind of stuff in his life. Whatever it was, this is a great song and one that I always go back to time and time again. ’I want to be stereotyped, I want to be classified, I want to be a clone, I want a suburban home…’

1. SILLY GIRL (I Don’t Want to Grow Up, 1985)
This is my all-time favourite Descendents song. All through high school, I had this girlfriend called Mandy. We were together a long time, even after high school, and I was never the type of kid that had a lot of girlfriends or dated or went to prom, or anything like that. I just had this one girl. It’s actually funny because I’m now married to a different Mandy. Anyway, the other Mandy and I dated all through high school and as New Found Glory started to do a lot more, I ended up moving to San Diego around 2001 – and she came with me. But we started to have bad times and it just didn’t work. So we’d break up, and then get back together, and it was just one of those relationships that we kept going way longer than we should have – for years. So this song always stuck with me for that reason. And again, Descendents made it OK for hardcore punk bands to sing about girlfriends and breaking up with them. When you’re a kid growing up, that is your biggest hardship in life. Anyway, in the end, I traded in that girl for Mandy 2.0, so it’s all good!

Listen to the songs on our Spotify playlist: The 10 best Descendents songs, ranked in order