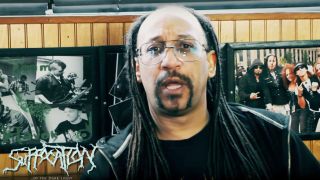 Suffocation have seen it all. Forming back in 1988, the Long Island five-piece were instrumental in forging the sound of death metal as well as experimenting with more technical influences.

But what has changed in death metal since the band’s heyday?

In the below video, vocalist Frank Mullen and guitarist Terrance Hobbs discuss how the scene has changed and evolved since the late ‘80s. Describing the early ‘90s boom as “the most amazing scene you’ll ever see,” thanks to the influx of bands and constant live shows, Suffocation admit that the modern era has led to “copycats” as most ideas have already been done before.

Terrance goes into detail about the impact the internet as had on the music industry as a whole, and that bands (old and new) can no longer just rely on a record label to survive.

Suffocation’s new album …Of The Dark Light is out now, via Nuclear blast.