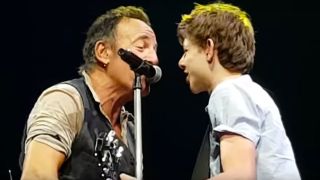 Bruce Springsteen has always been more willing than most to put his audience front-and-centre. He’s not the only one, of course — Bono can’t let a U2 set go by without a “spontaneous” bout of dancing with an inevitably attractive woman “randomly plucked” from the front row of the audience — but there’s something entirely different about The Boss’s interactions with his audience: they might be staged, they might not be staged, but they don’t feel staged. Instead, Springsteen’s moments feel joyful, and the current tour has provided plenty of great moments.

There’s the Sydney woman who got the ultimate Bruce selfie, and the Reddit user who captured the moment. Both pictures went viral. There’s the footage of Springsteen dancing with a four-year-old in Oslo. And there’s the footage of the E-Street band in Leipzig figuring out how to play an audience member’s request before succeeding in wildly jubilant fashion.

The latest clip to generate warm and fuzzy feelings across the entire width of the internet was shot earlier this month in Brisbane. It features a turn from schoolboy Nathan Testa, who attended a show at the city’s Entertainment Centre holding a sign reading, “Missed school, in the shit now, can I play Growin’ Up with you?”. The Boss invited the obviously prepared fan (he brought his own plectrum) onstage, and the two proceeded to perform a duet of the song, taken from 1973’s Greetings from Asbury Park, N.J. album.

Halfway through the band reduced the volume and Springsteen told a story. “I was about your age when I bought my first guitar,” he said. “I brought it home and I realised it wasn’t about how well you played it, it was about how good you looked doing it. So I got in front of the mirror and I tried out some poses.”

What Springsteen may not have realised was that this wasn’t Testa’s first appearance at one of his shows: back in 2013, the young man performed Waitin’ On A Sunny Day with the Boss before both successfully attempted the singer’s long-traditional knee-slide climax.

We look forward to further developments in the duo’s relationship in 2021.