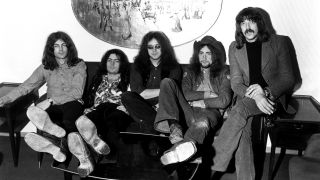 The album was recorded in 1972 at the Koseinenkin Hall in Osaka (August 15⁄16) and the Budokan, Tokyo (August 17). These were Purple’s first ever shows in Japan, but they weren’t the originally scheduled dates. The band were supposed to play in Osaka and Tokyo in May, but the shows were postponed due to American dates being rescheduled, and because Blackmore had been suffering from hepatitis.

Engineer Martin Birch says that neither Ian Gillan nor Ritchie Blackmore had actually heard the album before it was released. Only Roger Glover and Ian Paice from the band were in the studio when it was mixed.

The entire budget for the album was $3000, and there are no overdubs.

The back cover for the album was actually a photo from the Brixton Sundown (now the Brixton O2 Academy). The gig was on September 30, 1972. And if you look closely, you’ll spot a young Phil Collen in the crowd. Yes, the Def Leppard guitarist!

The best gig of the three was considered to be the Tokyo one. But the recording quality wasn’t as good as those from Osaka, so only The Mule and Lazy on the original album were taken from this date.

In Japan, the album was titled Live In Japan, and had a different sleeve design to the one we know and love.

While it was a double album in most countries, in Uruguay it was issued as a single record.

This was the highest charting album the Mk II version of Deep Purple ever had in America. It got to number six.