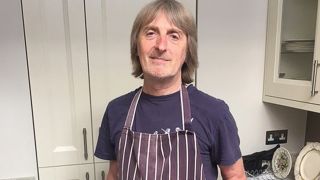 "I’m not really a big cook but I do occasionally have dinner parties. I’ve got a few things I can do moderately well, but when I try and do something fancy it falls apart. Mike Rutherford’s mum used to do kedgeree so I got that recipe and that used to be my mainstay, with Fried Llamas for dessert.

“The thing about Fried Llamas is that it’s been 30 years in-the-making. The initial recipe of a banana fried in butter with ice cream was borrowed. Over the years I thought, ‘Surely I can make this more interesting?’ and it’s what I’ve added to it that makes it popular with people who have a sweet tooth, and children.”

“Peel the banana but keep it whole, then slice the pear. Heat
a frying pan and gently melt the butter. Add the pear for a minute, then the banana and fry until they’re golden. If you’re cooking for 8 to 10 people, it’s ideal to have two pans going ’cause you have to flip the bananas and you could start inadvertently flipping certain pears that aren’t ready to be flipped.

You finish the cooking part, then the banana goes on the plate with the pear on either side. The Flake goes next to the banana with some vanilla ice cream, the chocolate ice cream goes on the opposite side. Then you add nutmeg on top and, if you’re really going some, add a little rum as well.

How did it get the name? Well, they’re not together any more, but years ago a friend of mine was with a much younger girlfriend who was a little naïve. They were at mine for dinner one night and I remember saying, as a joke, that this recipe was called Fried Llamas. The next morning the girlfriend said to my friend, ‘I really did enjoy those Fried Llamas at Ant’s house,’ and the name stuck.

It’s been years of me refining this recipe and I feel I’ve only just started, there’s definitely more things I can add. If we come back in 20 years’ time, it will have mushroomed into something far more interesting.”