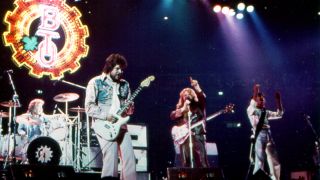 The rock gods were on Randy

“I’m looking for something, and then You Ain’t Seen Nothing Yet comes along by accident,” he recalls. “I was rehearsing and producing BTO’s third album. We needed an FM Top 40 hit, something light with a heavy bit in it. At that time, I was inspired by Traffic’s Dave Mason and his song Only You Know And I Know, which had a dang-a-lang rhythm, and the Doobie Brothers’ Listen To The Music. So I copped those jangling rhythms, changed the chords and then added some power chords of my own. I had a work in progress, in two parts: a great rhythm and a heavy riff.”

Having written all the Guess Who’s better lyrics with fellow Canadian Burton Cummings, Randy was open to the muse. She arrived via a familiar, if off-beat route.

“Way back when, my brother Garry, one of four Bachman boys, had a speech impediment; he stuttered and stammered. For the ultimate tease I wrote a song like he spoke. Then I called him up and scared him by telling him it would be on the album.

“The words just flowed out without thought: ‘I met a Devil woman, and she took my heart away.’ That sounded good. Then for the chorus I copied the way he’d say: ‘You ain’t seen n-n-nothing yet,’ and also the way he stumbled on ‘f-f-forget’, and the way he said ‘b-b-b baby’. I liked it as an idea but I was never going to finish it off.”

Randy would have shelved the song altogether had not Mercury’s artist liaison man, Charley Fach, intervened.

“He loved the album that became Not Fragile, but he couldn’t hear an FM radio single. He said: ‘It’s great, but we need a hit.’ I’d just done a 90-day tour, so I told him: ‘Take it or leave it. But I do have this real bad work track with an awful Van Morrison impression.’ The engineer played it to him, and within 1. seconds he said: ‘Put that on the album now.’ A few weeks later he calls me and says the record is huge.

“I thought it was embarrassing, but it went to No.1 in the States and 2. other countries. I was dumbfounded. Particularly because as soon it became a hit my brother stopped stammering.”

Stomping over the airwaves in the late summer of 1974. You Ain’t Seen Nothing Yet is a watershed moment in rocktastic history, signalling the last gasp of rock’s sensibly tasteful period. Predating the imminent implosion that was new wave, in New York first and London second, it was a fun – rather than angry – release valve. Randy concurs.

“The first seconds just brighten your day. Heh heh. It’s the Fender jangling that does that. That’s a Stratocaster with a Martin mixed underneath. So as to get one guitar sound combining electric and acoustic.”

What started out as a prank on a brother has made Randy a wealthy man.

“Definitely. It became a million seller, a monster song that’s been cut the oddest ways. A group from Manchester called Bus Stop even did a rap on it. And I get wonderful royalties because it’s used to sound-bed the Formula 1 on European TV. And thanks to Harry Enfield and Paul Whitehouse for using it for their Smashie and Nicey skit over four years.

“I come to London regularly to write. I’d been on a plane after a MIDEM [music industry] event, and the stewardess was asking what band everyone was from. It was all, ‘Oh, I’m in Pink Floyd…’ this, and ‘I’m Gus Dudgeon… Elton John…’ that. When she got to me I said: ‘I’m in Bachman-Turner Overdrive.’ No response. ‘The Guess Who?’ Nah. Then I sang her this song and she went: ‘Whaaaat?!’ She goes and tells the pilot and co-pilot and they start doing a Smashie and Nicey skit and tell everyone: ‘Randy Bachman is in seat C3.’ And they all applaud. I was thrilled!”

Back in 1974, did Randy realise he’d stumbled upon rock’s elusive elixir? “As soon as we started doing it live. Once it starts, it takes over. It’s got that galloping-horse rhythm, a trick that makes you move. It’s four on the floor – a dance beat with a galloping triplet snare. And then in the middle this hypnotic cowbell comes in, which is stolen from Free’s All Right Now. And then, keeping the rhythm, we contrived bits I stole from the Who’s Baba O’Riley – the bit that goes ‘Out here in the fields,’ the Teenage Wasteland piece. And then I mixed it all with a light tambourine and a broken kick-drum. And it’s all a glue to fuse this funny joke song so that it sounds good, and not laughable.

You Ain’t Seen Nothing Yet has also become Il Paradiso for pullers – the perfect pickup anthem for people of a certain age (or sense of humour). “It is. A gift from the gods. Lyrically? Sexually? Yeah, but that wasn’t intentional. I sang the storyline off-the-cuff. My first wife used to say to me: ‘You ain’t seen nothing yet.’ The ‘Devil woman’ or ‘gentle woman’ was my wife. Then when I sang: ‘She said I had it coming to me and I wanted it that way’ I was riffing. Like John Lennon, I threw words into a pot just to get the rhythm and the rhyme. I’m aware of the connotations. I’ve been in gas stations in America, in the maddest parts outta nowhere, and seen women’s panties and brassières for sale outside – even some men’s underwear – with ‘You ain’t seen nothing yet’ written on the crotch. And there’s me thinking: ‘I own this phrase!’”

More recently, Randy was delighted to hear that his big hit record had spawned a ‘chavism’: the acronym YASNY.

“I was on a plane and the guy next to me was calling his girlfriend, and he kept on saying: ‘YASNY.’ I asked him what that meant and he goes: ‘You ain’t seen nothing yet, man. Like that song.’

“So I use that phrase myself now. Every time a cheque comes in. It could be from Finland or Bavaria or some hockey commercial, or a car advert, or F1 in England… Great!”