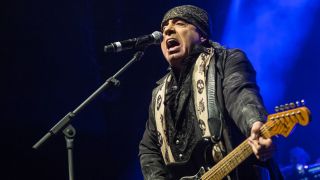 Though he’s indelibly associated with the E Street Band there’s far more to Steve Van Zandt – aka Miami Steve and Little Steven – than that famous bandana-clad association with his oldest friend Bruce Springsteen. This veteran of the Jersey Shore bar-band scene, a self- confessed R&B/punk/British Invasion nutter, has also hit paydirt with his solo work, including the acclaimed Born Again Savage, and a string of albums with The Disciples Of Soul.

A man of conscience – he was the steering force behind the 1985 Artists United Against Apartheid, which resulted in the Sun City album – an all-star affair featuring The Boss, U2, the Rolling Stones, Bob Dylan, Run DMC and dozens more. In the 21st century he’s turned his attentions to his own radio show – Little Steven’s Underground Garage – and spin-off label Wicked Cool Records. Plus, he played Silvio Dante in The Sopranos, so he’s mingled with the good, the bad, and the ugly ones in between. As he explains…

I never met Jimi Hendrix, but I was lucky enough to see him play four times. The closest I’ve come to his company in a more intimate sense is that my wife Maureen went out with Mitch Mitchell for a while – as in she was his girlfriend – so that’s a relationship twice removed. And I’d better not go into further personal details! Except to say, what a magnificent drummer Mitch was.

As for those concerts – I saw Hendrix the first time in a little cafeteria at a college in New Jersey when he got back home after making his career in London, so thanks for that Britain. Then I saw him at the now defunct Singer Bowl in Corona Park, Flushing Meadows, Queens, NYC in 1968. I also saw him unveil the Band Of Gypsies, on New Year’s night, with Buddy Miles and Billy Cox, which was kinda jazzy and loose, but great. That was 1969 which I believe was their debut show. Jimi was only around for a few years; it’s amazing what his legacy became.

When I started the Underground Garage radio show as host and programme director in 2002, I consciously decided I didn’t want to find guests and ask them to appear every week. We’ve had a few however and their contributions have always been spontaneous. I find them through mutual friends or just because they happen to be in town. Brian Wilson turned up via a mutual acquaintance and this guy told me it was the longest he’d ever spent with anyone since the 60s.

Brian suffers badly from Attention Deficit Disorder, which I also do. He has trouble concentrating, or relating to others for long, but he was totally coherent and together when he co-hosted a two-hour show with me. I figured he’d walk out at any time so I tried to get him off on odd things he’d done which don’t get aired anymore. We played Farmer’s Daughter and Cherry, Cherry Coupe, real weird Beach Boys oddities. And he loved every minute of it, although maybe not as much as I did! A real legend.

Name drop time! Ringo I’ve known off and on for many years. I knew him before he quit drinking and y’know he could be a touchy guy. Mood swinger. Then he cleaned up his act one day just like that and became the nicest guy in the world. He has a good memory for background details; he’s kind of an unpublished Beatles historian in a way. He’s come back on the show several times.

Once we had a conversation about the early days of Rory Storm And The Hurricanes and how it was all about the cowboy thing in Liverpool, the C&W names, the Chet Atkins licks. He told me he was going to emigrate when that band were demoing because they didn’t look close to a deal. He was desperately trying to go to the States. He wanted to live in Texas and become a cowboy. The trouble was he was dyslexic: because he was so sick as a kid he never went to school and therefore he couldn’t fill out the official forms. That was the only reason why he didn’t emigrate, which was funny. Talk about fucking destiny, or karma. I believe his next band did alright.

I had a conversation with him on his channel on Absolute Radio via satellite when he put out his new Fireman record. He’d got himself a channel for a month just to promote that. It was quite an honour for me because he wanted to have a couple of casual conversations with someone in the radio business and he chose me. I only knew him to say hello, we’d never talked face to face, but we spoke for an hour and he was amazing.

The thing I realised was I had to get some distance. I couldn’t come over like a starry-eyed 13-year-old kid with a bunch of Beatles records. I had to remove myself because I wouldn’t have been able to speak. Luckily he spoke enough for us both and played some of the best rock’n’roll music I’d heard in years.

We talked about everything. I love The Kinks – they are one of the big seven bands of the British Invasion. I said to him that I saw his singing style as unique. The more I went back to listen, the more unusually conversational it sounded. So I said: ‘It occurs to me you got your style… ahem… or it seems similar to, the vocal on Louie Louie by The Kingsmen. Specifically Jack Ely’. (Incidentally, The drummer’s mother trademarked The Kingsmen name for her son’s benefit just before the record was breaking. So they made the original or proper singer Jack Ely play the drums! Obviously he quit.)

Anyhow, I said – ‘Ray you sound similar!’ and of course, The Kinks did Louie Louie in their early set. He said it might be that, but it was just as much the fact he was in a Latino/R&B group called the Dave Hunt Blues Band that did a lot of samba and calypso things with a Trinidadian singer. In fact, he sounds quite black to the American ear, as if he’s singing a kind of patois. He also talked about his relationship with his brother, Dave. Ray had been with Hunt then when he left to form The Kinks. His brother had become a better guitarist than him, so he started slicing up his amp speakers with a razor blade.

Jack Black was promoting School Of Rock which is quite a funny film – not his best though, he’s a funny very guy. He wrote a theme song that went ‘Let me take you down to the Underground Garage…’ to the tune of Strawberry Fields which he improvised throughout my show. He was also my first co-host. He spun a few classics from The Ramones and The Who, plus a few of his own. It was a real honour because Tenacious D were a big influence on me growing up [Are you sure? – Ed].

Now there’s a case. Doing the Sun City album I met about 50 of my heroes, which did make me nervous. I avoided that for years because it worries me. If your hero turns out to be an asshole what are you gonna do? It affects you. I went to see the Rolling Stones at Convention Hall in Asbury Park with a few friends years ago and afterwards they wanted to go to the hotel to get their autographs. I didn’t want to go to this smart Berkeley Ocean Front place but we tripped down the hallways like a bunch of kids.

One of us noticed that Freddie King who had opened the show had his door ajar so my friend pushed me inside and said: “Let’s go in and meet him’”. Like a fool I asked, “Could we have your autograph?” He picks up a pillow off his bed, and underneath is a big fucking .45 which he grabs and gives me a fucking dirty look and tells me where to get off. To this day I don’t play any Freddie King licks. I won’t play his songs. See it does matter – heroes can let you down.

Lou is a character; he’s a piece of work for sure. A New York City legend. He’s hard to get next to, he’s just an odd guy who doesn’t seem to want to be close or friendly, so I don’t want to hang out with him. He has his own space – you feel like you’re building a rapport, then he turns on his heel. I guess he doesn’t suffer fools gladly.

During the making of Sun City, Pete Townshend and Keith Richards were great allies. Pete couldn’t have been more helpful. He took us to his studio at Eel Pie where he put the guitar on a couple of takes and off he went. Keith ended up cutting the Bono song Silver And Gold with Ronnie Wood, Steve Jordan and Peter Wolf from The J. Geils Band. I think Daryl Hannah and Daryl Hall are in there too. Plus Keith gave me my first ID for the radio show and Ringo gave me the second – this was even before it was on, so they didn’t know whether it would be any good or successful. You never forget that kind of graciousness.

The scariest encounter of the Sun City project had to be Miles Davis. I wrote the intro for him to play and he is the scariest individual I’ve ever met – not that I’ve seen, that’s definitely Howlin’ Wolf – but Miles was extremely frightening. He’s just not friendly. He makes Lou Reed look like a pussycat, Hari Krishna guy next door. Oh my God. The fact that he showed up at all was a real miracle.

He came in, sat down and I played him the Silver And Gold tape. He’s sitting next to me and he turns to me, and he talks real low and slow, and right in my ear: “Hey man do you want me to fucking play or what?” So he does his take, and I asked him to re-do it with the mute on. I went and reassembled his old quintet with Herbie Hancock, Ron Carter on bass and Tony Williams on drums. Fact was he was into the concept. Once people knew about the repulsive and blatant nature of South Africa: which was “We are gonna have slavery and you can’t do a fucking thing about it”, then I guess Miles agreed with me. “Yeah you muthafucker, we’ll see about that.” Maybe that’s all we had in common, but it was enough.