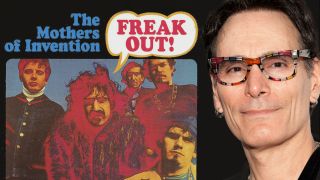 When I was growing up in New York, the albums I really cut my teeth on were things like Led Zeppelin II, Machine Head by Deep Purple and the first few Queen records. I listened to these albums all the time and absorbed everything I possibly could.

But the release that really fired me up what Freak Out! by The Mothers Of Invention. After all, the first album I ever bought was by The Partridge Family – and then I came across Freak Out!. It was, needless to say, quite a contrast.

As soon as I heard Freak Out! it blew me away. It was a two-record set, but it was melodic and very left-of-centre, abstract and experimental. For me, it seemed as if Frank Zappa was making a statement of intent. I just couldn’t believe it. It was like a joy had filled my eyes – and ears. And thereafter, I just got hold of as many Mothers albums as I could: Absolutely Free, which originally came out the year after Freak Out!, in 1967, and then We’re Only In It For The Money, Uncle Meat and a bunch of others. I also couldn’t resist checking out and buying Zappa’s solo albums, stuff like Bongo Fury.

What was also unique about Freak Out! was that whereas Led Zeppelin II created a genre of rock music that is still imitated and played today, Freak Out! – and indeed more or less every album Zappa ever released – remains totally individual. Nobody has, or ever will, come close to achieving the anarchic sound that Frank created. On Freak Out!, I just couldn’t resist tracks with crazy titles like Who Are The Brain Police? and The Return Of The Son Of Monster Magnet.

But Frank was a true artist, like Hendrix and Cobain, among others. He was one of these people who just had to express himself creatively. He didn’t have any choice. And that is the mark of a true artist: you have to do whatever it is that drives you.

Yet Frank was also a very sarcastic type of guy. Whenever he walked into a room it felt like he could see right through you; he seemed to know intuitively what you were about. In fact, when I was planning to move out to the West Coast I sent him a tape of my band. He came back to me saying that he thought my playing ‘had potential’. So when I got to LA in 1978, I started transcribing for him, because I had been composing my own material ever since I was a kid. There was something about writing out charts on manuscript paper that had always fascinated me. I mean, some people get off on flowers or porno, but for me it was always about creating music.

A couple of years later, when I asked Frank if I could be in his band, he said: ‘Why?’ And I said right back to him, ‘I know every one of your songs. I’ve been listening to them ever since forever.’

I believe that in a hundred years’ time from now, people will still be listening to Frank’s music and writing about him.