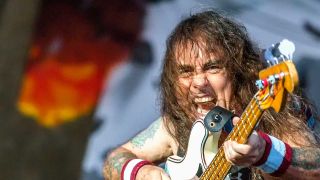 Steve Harris is in philosophical mood when he calls from his home in the Bahamas.

“You’ve got to cram things in and live life while you can,” says the Iron Maiden bassist and linchpin. “My candle’s burning down towards the end in my life, so I’ve just got to do what I want to do.”

He’s referring to The Burning, the latest album from his side-band, British Lion – their first in nearly eight years. “It’s evolved into a really solid unit,” he says of the band. “It feels very different now to when we first did it.”

Your first album away from Maiden was a Steve Harris solo record called British Lion. This is a British Lion album called The Burning. What’s the difference?

Well, I never really felt comfortable with it being a solo album. It was more of a side project. And it’s totally evolved into a band, which is what I wanted it to be anyway. The first album was recorded whenever we could, a bit more bits-and-pieces. This one, we went in and recorded more the way Maiden do it, which is as a live band.

You were playing some of the songs from this album on the first British Lion tour six years ago. How many of them date that far back?

It’s a similar thing to Maiden when we first started out. You have a couple of covers in your set here or there, and as soon as you get a new song, you bin the covers. It’s great, cos we went straight into the studio to record them, and we didn’t have to rehearse them.

Does anyone have the guts to tell you if one of your songs isn’t any good?

It’s not like that with this band, cos they’re the ones driving the songs from the start. They come in with the basic ideas and we take it from there. If I have a song, I’d want to try it with Maiden first, cos that takes precedence. And as long as someone is involved outside of Maiden, there’s no way it’s going to go to the table with Maiden. That’s the rule we’ve always had.

Have you played the new album to anybody from Maiden?

No. Why would I, unless they asked me to? I wouldn’t force anything else on them. If they asked me: “Can I have an ear’ole of it?” then I would. I dunno, it’s just not something I’d do.

You’re pulling double duty at Download 2020 with British Lion and Iron Maiden. Why?

I could sit around twiddling my thumbs, but I’d rather play football or play with British Lion. Or both. It’s not that I get bored. There’s always something going on. My missus would tell me that I need to say no to a few things here or there. And she’s probably right.

You’ve got Maiden and British Lion. Are there any other musical itches left for you to scratch?

[British Lion guitarist] David Hawkins said he’d love to do another album with me, doing some prog stuff. I went: “You’re joking, ain’t you? I ain’t got time to do these two, let alone something else.”

If you find a window, and had the chance to collaborate with any musician tomorrow, who would it be?

What about outside of hard rock or metal? You’re a big fan of Genesis and Jethro Tull.

When you’re into bands that much, you don’t really think about working with them. You never really have a chance. You tend to put them on a pedestal.

Yeah, but I have people that I look up to too. I avoided meeting Ian Anderson for so long because I didn’t know what I’d say to him. I ended up playing tennis with Peter Gabriel once, just cos he was on the court in the same hotel as me. I don’t know if he even knew who I was, but I didn’t say anything cos I didn’t want to get tongue-tied. I didn’t want to act like a fanboy, even though I felt like one.

Will there be a new Maiden album before Download?

You know I can’t tell you that.

Okay, will we have to wait another seven or eight years for another British Lion album?

[Laughs] I can’t answer that either. Hopefully not. But then I remember saying that before. We’ve got enough material for probably a third of an album right now. Maybe even half. The thing is, we’re all prolific writers. The amount of ideas I have is insane. Mind you, I’d rather have that problem than drying up.

As a teenager you trained as a draughtsman. If you’d have kept at it, you’d be retiring in a couple of years.

Same thing as football. If I’d have done that I’d have retired many years ago. Doing this has worked out fantastic. It’s a long career.

Not really. Maybe it’s overrated. So many people seem to wish for retirement, then pop their clogs so soon afterwards cos they get bored or their body runs down.

So when does Steve Harris knock it on the head?

I think someone else will have to knock me on the head. Probably the missus.

The Burning is out now. British Lion and Iron Maiden both plays this year's Download Festival in June. Tickets are on sale now.