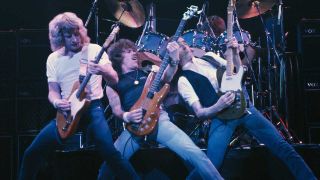 So who’s up for a bit of heads-down, legs-apart, no-nonsense, mindless boogie, then? As any fool knows, Status Quo aren’t just one of the most enduring and successful rock bands of all time – having notched up a gobsmacking 66 hit singles, more than 100 appearances on Top Of The Pops, and spent 434 weeks (over eight years) in the British singles chart – they also have one of the most expansive catalogues.

Leaving aside the multitude of compilations and live records that flood the market, Status Quo have some 33 official studio albums to their name, the most recent being 2019's surprisingly well-received Backbone.

But if you’re looking to buy into the Quo back catalogue or expand your Quo collection, tread warily. Because while the band hit an enviable run of form with a succession of near-flawless albums they released between 1970 (Ma Kelly’s Greasy Spoon) and, for the sake of argument, 1981 (purists consider Never Too Late to be the last ‘real’ Quo album), some of the material they churned out after a post-Live Aid reunion is woeful.

After bassist Alan Lancaster and drummer John Coghlan had jumped ship in the mid-80s, guitarist/vocalist Francis Rossi had little opposition within the band when it came to dabbling with more middle-of-the-road-flavoured material like In The Army Now, The Anniversary Waltz and Burning Bridges (songs that Lancaster would rather have chewed off his own arm than perform).

Certainly guitarist/singer Rick Parfitt seemed content to go along for the ride. The version of Fun Fun Fun that Status Quo recorded with The Beach Boys in 1996 might have been little short of a travesty, but it sounded like a work of genius compared to the same year’s cover of Steeleye Span’s jaunty folk-shuffle hit All Around My Hat, recreated in the company of Span singer Maddy Prior.

Fortunately, the renewal of Rossi’s writing partnership with former road manager/ harmonica player Bob Young helped to refocus Quo’s creative energy, and Under The Influence (1999) was hailed as their best album in years. Heavy Traffic, in 2002, was better still, although with hopes of long-term Quo fans coming to the boil, the band bottled it with the aforementioned The Party Ain’t Over Yet, and the reformed "Frantic Four" (featuring the classic Rossi/Parfitt/Lancaster/Coghlan lineup), whose reunion tour in 2013 was such a huge success, never entered the studio.

Here, then, are the Status Quo albums that many of us wore out tennis rackets to, throwing shapes in the privacy of our bedrooms; the ones that the band made before your gran became a fan as well.

The Hello sleeve motif of a silhouetted Status Quo, instruments and arms raised aloft, was probably hand-painted onto the back of a thousand denim jackets during the 1970s.

The band have never sounded cockier nor more physically fit than they do on what is without a doubt their most popular and respected album – which entered the UK chart at No.1 in 1973.

With its eight songs (the bonus track Joanne was added when the album was reissued in 2006) Hello! contains not a trace of a filler; and even today no Quo concert is complete without songs like Roll Over Lay Down, the epic Forty Five Hundred Times or the perennial Caroline.View Deal

According to legend, the Apollo’s balcony bounced up and down with a rise and fall of a terrifying six feet as the audience got down and boogied along to songs like In My Chair, Rain and Don’t Waste My Time. The extended, 16-plus-minute rendition of Forty Five Hundred Times on Live! has quite rightly come to be considered a seminal track.View Deal

Status Quo’s fifth studio album and the band’s major-label debut, Piledriver kicks in with the pumping Don’t Waste My Time and winds up with the band’s take on The Doors’ driving Roadhouse Blues, both of which became stage favourites.

But it was the commercial raunch of Paper Plane, with its suggested drug-tinged lyrics about ‘Riding on a big white butterfly’, that reached No.8 in the UK in 1973 and provided Quo with their first real hit in three years.

On the flip-side, though, A Year, Unspoken Words and All The Reasons revealed a far softer and more sincere side to Quo – a side that many of their critics were not prepared to give the band credit forView Deal

Feeling under pressure can sometimes bring out fortitude in a band. It certainly seems to have helped Quo with Quo. Being nagged by the record company to deliver their third album in two years, and with their last album, Hello!, having topped the UK chart, it was time to stand or fall.

If anything, Quo is a heavier album than Hello!, although Break The Rules (the single taken from it) is an irresistibly hook-laden chugga-stomper that is among Status Quo’s most appealing songs.

The one-two punch of Backwater and Just Take Me is marvellous, and Slow Train, Drifting Away and Don’t Think It Matters confirm the album’s remarkable overall consistency.View Deal

Guitarist/vocalist Rick Parfitt takes the credit for the two most outstanding moments on Blue For You: the granite-riffed Rain and, more importantly, The Mystery Song.

Written all alone during a night-long stint in the recording studio after Francis Rossi had laced Parfitt’s tea with “an inordinate amount of speed”, he wrote his masterpiece after thinking about a prostitute and her stocking tops.

The six-minute rocker became a huge fan favourite, but it didn’t make it into the band’s live set until many years later; unlike Rain, Is There A Better Way and Ring Of A Change. Once again, Status Quo’s mellower side was evident, in the title track.View Deal

Although best-known as the parent album of Status Quo’s only UK chart-topping single, Down Down (in December 1974), On The Level is another of the group’s strong records in terms of its consistency.

Lyrically, the album found them in a darker place than they usually occupied; Francis Rossi wrote Down Down – about his ex-wife and the way he felt his band were victimised by the music press – through gritted teeth. Little Lady, Most Of The Time, I Saw The Light, Over And Done and Alan Lancaster’s bittersweet Broken Man, all great rock songs in their own right, also seem to voice dissatisfaction and anger with various persons unnamed.View Deal

Some people reckon Rockin’ All Over The World, Quo’s tenth studio album, was when the rot began to set in.

The slick production style of Pip Williams (Barclay James Harvest/Dr Feelgood/Uriah Heep) was a bitter pill to swallow, and Rossi once went as far as to call this album “poxy” – a sentiment that Rick Parfitt vehemently opposes, however. (For what it’s worth, bassist Alan Lancaster also cites RAOTW as the beginning of Quo’s downfall).

The title track (a cover of a John Fogerty song) gave the band an enormous crossover hit, of course, but Hard Time, Can’t Give You More and Rockers Rollin’ remain severely underrated.View Deal

Pip Williams had been removed from the producer’s chair for Status Quo’s previous album, (1980’s Just Supposin’), and with the help of John Eden the band’s last album to be recorded with original drummer John Coghlan turned out to be another harder-edged but still distinctly hummable collection.

The group’s boogiefied revamp of the Tom Jones-popularised hit Something ’Bout You Baby I Like sounded surprisingly authentic, but away from the confines of radio-land, the band were still mining pure 12-bar gold in the shape of songs like Never Too Late, Mountain Lady and the quite brilliant, Telecaster-thrashing finalé, Riverside.View Deal

It perhaps speaks volumes that Status Quo’s The Party Ain’t Over Yet set-list included just one song (Rick Parfitt and bassist Rhino Edwards’s Belavista Man) from that album, but three from Heavy Traffic (All Stand Up (Never Say Never), The Oriental and Creepin’ Up On You) – an album five years older.

The latter song would have been perfectly at home on any of Quo’s classic albums from the 70s, and overall Heavy Traffic was a pleasant surprise to all the band’s detractors who had long-since written them off. If only Quo had had the balls to capitalise on what had seemed at the time like an unlikely second wind.View Deal