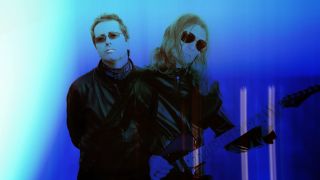 Could Sontaag’s self-titled debut album be the year’s bravest project?

It’s progressive. Not prog. Progressive rock was exactly that when the early seventies was getting under way with a full-tilt post-hippie blues-rock surge, which dominated the club circuit until a new influx of broader-visioned bands started appearing with names Like Van Der Graaf Generator and Genesis.

A crucial difference was that, although their songs were as long as the improvised jams which were meat and potatoes for the blues-rockers, their musical creations had structure, narratives and even stories. After the Moody Blues dramatically recounted their Days of Future Passed, Van Der Graaf spent a whole album side relating a lighthouse keeper losing his marbles before it took Hawkwind to take the storyline into the cosmos and whip up a space ritual.

But it was never that simple as, 20 years later, The Orb had taken their own astral highway into the future, using spoken word bites for their huge, evergrowing brain that pulsated from the centre of the Ultra-world. Another quarter century on and we have Sontaag who, by referencing those last five decades of music and film, have created a highly original sci-fi morality tale and one of the year’s most unusual listening experiences with what they are courageously calling “a space opera” or “sonic cinema”.

Sounds and music by Richard Sontaag, words and narration by Classic Rock’s very own Ian Fortnam and co-production by the mighty Youth, Killing Joke-Orb veteran and no stranger to the panoramic sonic experience. A man who knows his dub science too.

Men with some ambition?

Yes indeed, but it’s this sheer big screen ambition which initially sets this new project apart. Crucially they pull it off in such fearlessly widescreen style the piece takes on a life of its own.

Fortnam’s voice and lyrics tell a sci-fi story set in a distant galaxy where The Ancients have developed the secret of synthesising energy from harmonic sound, giving them the power to reanimate burnt-out planets using behemoth orbiting sonic generators.

The crunch comes when musical fuel is needed to survive, which is where Sontaag’s multi-instrumental soundscapes come in, his soaring montage nodding at Echoes-era Floyd, Hawkwind, krautrock, the Orb, space-howling 1966 proto-psych, Moody Blues and many more, reaffirming the increasingly threatened legacy of classic music, movies and literature in the digital age. Progressive restored to its original sense.

Try and sum it up?

Brave, new, worldly…and unashamedly progressive. In the proper sense of the word.