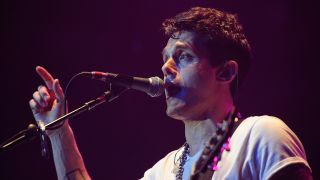 Grammy-bait, guitar great, preppy bluesman, love rat – John Mayer has been called all these things. Sheffield’s Eastwood Allen (his dad’s idol was Clint) is a freelance video editor and lifelong Mayer fan, is and his latest creation is Someday I’ll Fly.

This unauthorised yet authoritative documentary uses archive footage to chart the star’s colourful career to date and, as its 26 year-old maker tells Classic Rock, it was a painstaking process.

Yes. I did one for Kings Of Leon’s Frontier City. Then I did one for John Mayer’s song Assassin and that got endorsed by John himself. He put it on his Twitter and his record company Columbia used it on their YouTube channel.

So what approach did you bring to this hour-long film?

I wanted to put his celebrity status to one side. I said, what do I like about John? Guitars. So I put in tons of guitars in there. Then there’s his quotations, his cheekiness. He’s a character, so let’s put that in so like-minded people will get it.

It took six months. I love to collect stuff on him and his fan community has amassed loads of videos and clips and bootlegs. He’s known for not putting limits on people recording at his shows, because he got famous due to people recording his shows and putting them on Napster. So all this early stuff had been documented, and obviously after he was famous it was easier. But it did take a long time and it was a bit difficult.

How did you deal with the issue of rights?

I always thought that if you did it for the right reasons, in good taste and not trying to make money from it, then it’d be okay. If there was a problem I’d just take it down.

Someday I’ll Fly covers a lot of ground in an hour, starting with Mayer’s teenage discovery of Stevie Ray Vaughan.

A lot of music documentaries gloss over the person’s influences, but I like to know who the people I like listening to like to listen to. With John it was Stevie Ray Vaughan, Jimi Hendrix, more recently Neil Young. I wanted to include some of these to make the film more well-rounded.

By the end he’s playing with The Police, Buddy Guy, Eric Clapton. You must’ve seen those clips and thought, I’m having that!

Absolutely. I needed to get those collaborations in, where he’s stepping away from being just himself. You could see how complete a guitarist he is.

I’ve always been a fan of that, to be honest – that confidence on the brink of arrogance. You have to have it, especially as a solo artist. He’s a character, not just a robot sitting there playing great guitar.

He dated a string of famous girlfriends – Jennifer Aniston, Katy Perry, Taylor Swift – and eventually got labelled a love rat by the tabloids. Then there was a disastrous Playboy interview where he used the N-word. You broach all this.

I included all that to show how it changed his musical direction. He went from pop to more country on his last two albums [Born And Raised and Paradise Alley]. He went into hiding after that celebrity stuff, knowing his new music might alienate some people, but he decided to change and evolve. I appreciate that.

In the concert footage his audience is predominantly young girls!

His American shows are known for that. But I went to see him in Amsterdam and it was mainly guys! People were there for the guitar playing and the songwriting.

Do you know if John has seen it yet?

I couldn’t tell you, but if he did I’d like to think he’d get in touch like he did last time. I don’t want to hassle him about it, though.