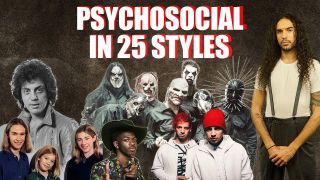 It seems like every single day there's a new incredible thing for us to watch on the great world wide web.

Today, the internet has yet again provided and this time it's in the form of a neat little medley of Psychosocial, the Grammy-nominated 2008 single from the eighteen lugged Iowan juggernaut that is Slipknot.

This isn't the first time some internet dude has messed with the classic 'knot anthem. Last summer some nutjob played the song on a machine gun – yes, you read right, a MACHINE GUN – and only last month, a crazed percussionist bashed out that very same track's rhythm on some tiny drums.

This time, the YouTuber responsible for yet another insane rendition of Psychosocial is the Ten Second Song guy (real name Anthony Vincent). The YouTuber has previously covered 10 pop songs in the style of Metallica and quite a few other rock and metal songs, including System of a Down's Chop Suey and Twenty One Pilot's Heathens, in similar fashion to this one – in the style of 20 other artists.

But Vincent has reimagined Slipknot's Psychosocial in the style of not 20, but TWENTY FIVE different artists (and umm... genres?) including 90s floppy-haired teen boppers Hanson, The Cure, Gojira, Tool, Mayhem, Ghost, Linkin Park and even in 8-bit.