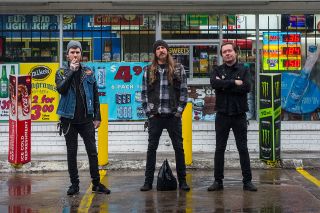 Hailing from the same Savannah, Georgia hotspot that gave us the likes of Baroness, Kylesa and Bear Fight!, Black Tusk have been pummelling the hirsute of heart with their self-coined brand of ‘swamp metal’ over the course of 13 years, four albums and more EPs and splits than you could throw a salamander at.

Still incensed by the tragedy of losing bass player Athon in a motorcycle accident in 2014, the remaining members are gearing up for the release of latest album TCBT, due to come racing out the Season Of Mist traps on August 17.

For speed freaks, lovers of the kind of friction-burn, crust-fired, strain-at-the-leash riffs Savannah’s been such a potent breeding ground for, we have an exclusive preview in the supercharged form of the track Scalped.

Clocking in at just under 5 minutes, it’s pounding, atmospheric and slightly Tribulation-esque opening proves to be the precursor for a capricious lurch into face-ripping riffage that combines feral, frustration-ignited urgency, a deep-rooted understanding of pacing and the hair-raising power that only a judicious use of keyboards can bring.

Scalped is a scorched trail across the desert plains wrapped in very small ‘g’ gothic sheath, so rev up your engines, gaze upon a moon intruding on a blazing daylight sky and outrace oblivion right here!