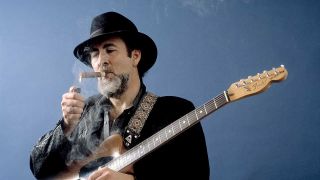 Sweet Dreams, released in 1972, remains the finest moment in the career of the man who was damned with the accolade ‘the guitarist’s guitarist’. Lauded by the likes of Jeff Beck, Gary Moore (who covered the blues-rock thriller The Messiah Will Come Again) and, more recently, Joe Bonamassa, Buchanan never attained any real fame or fortune during his lifetime. These days he’s as infamous for apparently turning down an offer to join the Rolling Stones and his mysterious death in a Virginia jail cell in 1988 as he is for his music. Yet Buchanan’s legacy as a guitarist punches way above that of many of the rock stars who held him in such high regard.

Born in Ozark, Arkansas in 1939, Leroy ‘Buch’ Buchanan was a master of the Telecaster who elevated Leo Fender’s humble “working man’s” electric guitar to the level of a Stradivarius violin. It was Buchanan, along with fellow doomed genius Danny Gatton, who seeded the ongoing obsession with Telecaster tone. He pioneered the use of Fender’s first-born six-string’s volume and tone controls as on-board effects. Despite the massive developments in guitar technology in the 70s and 80s, Gatton and Buchanan proved that the most versatile solid-body electric guitar ever designed just happened to be the oldest and simplest.

Like Gatton, Buchanan was most famously associated with a 1953 Fender Telecaster. Nicknamed ‘Nancy’, this beaten-to-hell survivor has become as iconic as Buchanan himself.

To understand Buchanan’s impact on the history of the Fender Telecaster, you need to explore the guitar’s origins. Leo Fender, a lap steel and amplifier manufacturer based in Fullerton, California, began working on a solid body electric guitar concept in the late 1940s. Fender essentially took the design of his lap steels and adapted it into a six-string that could be played like a traditional ‘Spanish’ guitar.

Crucially, Fender didn’t play guitar himself. He approached the project as a problem solver. Existing guitars had big, hollow bodies. They had a tendency to squeal with electronic feedback when amplified, and their mahogany necks would likely as not snap if the guitar was dropped. Fender introduced a solid body to drastically reduce feedback, and introduced a bolt-on neck that could be replaced easily if damaged.

Christened the Esquire, the new single-pickup guitar was not your classic overnight success. Introduced at a trade show in 1950, it was savagely ridiculed, with one wag dubbing it “a toilet seat with strings…” Later that year a two-pickup version, the Broadcaster, was launched. After a challenge from the Gretsch company, who made drums with a similar name, the guitar was renamed the Telecaster in 1952.

The “toilet seat with strings” soon began to develop its own vocabulary thanks to players such as country jazz shredder Jimmy Bryant, Ricky Nelson and Elvis Presley sideman James Burton, and the Bakersfield icon Don Rich of Buck Owens & His Buckaroos.

Blues artists including Muddy Waters, Albert Collins and Buchanan himself soon discovered that this basic little guitar was a tonal chameleon. Many people still don’t know that Jimmy Page used a ’59 Telecaster on the first Led Zeppelin album, and not the Gibson Les Paul they assume they hear. Buchanan fan Jeff Beck pulled squawks, wails and sitar sounds out of his monumentally pimped 50s Tele with The Yardbirds.

For Buchanan’s part, he mined the Telecaster’s lap guitar heritage, manipulating the instrument’s volume and tone controls with his pinkie to emulate the sound of wailing country steels. He could simulate a phasing effect, palm muting along the strings, and would flip from aching long sustained bends to breakneck-speed blues runs in a split second. The latter is a major element in Joe Bonamassa’s style. It’s all there in Sweet Dreams, from the opening faded in D, E and F# notes to the nitro’d flourish just after the one-minute mark. And that sound, man! Before guys like Buchanan, great guitar tone was really just a happy accident. He taught us to treat it like the Holy Grail.

Like his favourite guitar, Buchanan refused to be typecast as a player, splicing threads of rockabilly, country, jazz and pop DNA into his blues-rock delivery. He was a jobbing guitarist his whole life, your classic gun for hire, and guys like him needed the skills to play any style of music in order to survive and keep paying the bills. One element of Buchanan’s character that was true to the blues tradition was his tendency to self-mythologise.

The oft-repeated story that he turned down an offer to replace the then recently sacked Brian Jones in the Stones in 1969 (the job that eventually went to Mick Taylor) has never been established as fact. If he’d ever wished to be anointed by rock’n’roll royalty, it went down differently from he would have liked.

When Keith Richards reminisced about Buchanan in a 1998 interview with Rolling Stone, his comments weren’t exactly tinged with fondness: “Eric [Clapton] and Ronnie [Wood] and I pissed in his beer once [laughs]. It’s the only time we ever got that mean with anybody. It was an Atlantic recording session in the seventies. I said: ‘Go ahead, Eric, get your cock out. We’ll be pissing in that fucker’s beer. He’s being too pushy.’ Eric will deny it, of course, but don’t worry about that, I’ve got Ronnie Wood to back me up.”

It’s possible that Buchanan’s claim that he said no to Mick and Keith is what pissed off the Stones guitarist. Especially if the invitation was never actually extended to him in the first place. Maybe he was considered, but then it’s likely that anyone who could play guitar and not take the spotlight off Mick Jagger was in with a shout. That’s what did for Small Faces refugee Steve Marriott, apparently – how could you have someone with a voice like that and about as laid-back as Speedie Gonzales sharing the stage with Jagger?

The Stones thing is not the only squeaky board in the back story. Even the tale of how Buchanan came into possession of his Telecaster ‘Nancy’ blanches a little under closer scrutiny.

Apparently, while working a day job as a barber, Buchanan saw someone walk past the shop window carrying the battered old Telecaster under their arm. “I knew that guitar was mine, you know?” he said later.

“I walked out, right in the middle of a haircut, and I said: ‘Where’d you get that guitar?’ I just told him: ‘I want it.’ I said: ‘I’ll get you the most beautiful guitar you’ve ever seen, and I’ll trade you straight across.’

“I left work that day and went to a friend of mine with connections and said: ‘I want a purple Telecaster.’ He had it before the sun went down. We swapped guitars, man. That was it. It was like he knew it was my guitar, too.”

While the yarn is not completely implausible, laying his hands on a purple Tele at short notice, even back in the Swinging Sixties, feels like a bit of a stretch. It made for a good story, however, and Buchanan was only continuing a blues tradition that stretched back to the Mississippi Delta of the late 1920s and early 30s – spooky myths pulled in the punters at your local juke joints.

Troubadour Tommy Johnson, who wrote Canned Heat Blues, put the rumour about that he’d sold his soul to Satan in exchange for killer guitar skills. Time: midnight. Place: an unspecified crossroads. Of course, the origins of the myth became confused over the years, and by the release of Robert Johnson’s King Of The Delta Blues Singers compilation album in 1961 the pact with Satan story was attributed to Robert Johnson.

If Buchanan was telling porkies, he really didn’t have to. Like Robert Johnson, it’s the jaw-dropping guitar chops that are the real story, even if the rock’n’roll myth machine likes you to go out with a bang.

Roy Buchanan’s death is still the subject of fierce debate. Officially ruled a suicide, he was found hanging in a cell at Fairfax jail in Virginia, his shirt tied around his neck, on August 14, 1988. Some claim that bruising around his head prove that he had been assaulted after being arrested, for public intoxication following a domestic dispute. We’ll likely never know the truth. It was a tragic end for a guitar genius, yet the circumstances were suitably dark and mysterious for a blues musician. In a further tragic twist, fellow Telemaster Danny Gatton committed suicide in October 1994.

In the aftermath of Buchanan’s death there was the inevitable increase in interest in his back catalogue. Ultimately, Roy Buchanan remains a cult figure, the guitarist’s guitarist that not even Martin Scorsese can pull out of the shadows. Danny Gatton eventually grasped the fame that he craved, only for it to fuel a depression that would lead to his suicide. Buchanan, according to an interview he conducted shortly before he departed for the last time, faced no such demons.

“Probably the reason I never made it big is because I never cared whether I made it big or not. All I wanted to do was learn to play the guitar for myself. You set your own goals for success. And when you succeed, it don’t necessarily mean that you will be a big star, make a lot of money, or anything. You’ll feel it in your heart, whether you’ve succeeded or not.”

Buchanan didn’t become a big star or make lots of money, and he probably didn’t say no to the Stones. But the man who turned guitar tone into an art form attained successfully that one thing every guitarist dreams of: a unique sound that can’t be claimed by anybody else. That’s what sweet dreams are made of.