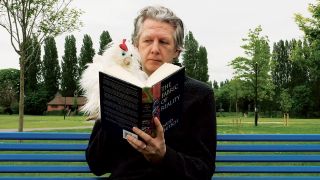 By the time Tinyfish played their last show at Celebr8 in 2012, they had released three highly regarded studio albums and played festivals from Poland to Philadelphia, gathering a fiercely loyal following. Main man Simon Godfrey left his motherland and moved Stateside, where he continues to work remotely with the band’s lyricist, narrator and self-described Chief Audience Frightener, Robert Ramsay.

In 2013 the duo released Rise Up Forgotten, Return Destroyed under the Shineback moniker, aided by members of Touchstone, DeeExpus, Darwin’s Radio and The Fierce And The Dead. Now Ramsay is set to frighten audiences in the relative safety of their own home with a solo album, Confound And Disturb. Largely spoken word, this is not your typical prog album, so we needed to find out more.

What led you to record a solo album?

I’d always joked about doing one. I looked around and there’s a whole bunch of material I’ve gathered that’s been chucked in a drawer and I realised that maybe there was enough stuff to make an album. I just took the best bits and thought of a few more. It really took off when I went over to Philadelphia for RoSfest last year and we [Ramsay and Godfrey] recorded the vocals for three or four of the songs. I thought, “Right. This is actually happening now.”

You’re chiefly a lyricist/narrator. Did that present a challenge to making the album?

Well, people keep telling me I’m a musician. I play the harmonica extremely averagely. It did turn out I was the only member of Tinyfish who could read music! When I first told people I was really serious about doing it, all my lovely musician friends were going, “I’ll help you out!” and I’m like, “I don’t know what to do with you!” I couldn’t think how best to use their talents. Matt [Stevens] I knew what to do with. I did the spoken-word bit for The Black Box Society and I said to Matt, “Just imagine that you’re trapped in a black box and you have to play your guitar to escape.” I wanted the transdimensional guitar of madness!

I’ve put a sticker on the front of the album that says ‘Advisory: Mostly Spoken Word’ so people don’t come up to me and say, “Hey! I bought your album and there’s hardly any songs on it.”

I hadn’t even thought of that, but now you say it… [hyperventilates]

How did the title come about?

It was actually Tim Lawrie [Bad Elephant Music] who named this album Confound And Disturb. It was going to be called The Cosmic Poo Experience. Sometimes when you’ve had a really good poo it expands your mind.

The artwork is quite special. What can you tell us about that?

My mate Andy Hall suggested to me that you couldn’t have a real prog album unless you had a map like Tolkien. So I went, “Go for it!” and he very sensibly subcontracted it to Mark Buckingham, the famous comic artist. His work is so fabulous. I first met him when he and Matt [Stevens] did a double header at Orbital Comics. He was signing the last volume of Fables. I passed over my copy and said, “I’ve been a fan of yours ever since Marvelman,” and he goes, “Oh, I’ve got all your records!”

As you say, it’s a potpourri. At the moment, me and Simon are planning out the next Shineback album and I said, “If there’s one thing I want, it’s not a concept album.” We’ve done ‘concept album’. Because this was stuff that’s been gathered over years, there was no theme. Sometimes I just have ideas that I can’t get away from, like Hawaii Fried Chicken. The minute I found out you could do the Hawaii Five-0 theme in chicken noises, that became the challenge. Once somebody suggests that to you, you start doing it in your head. [Clucks the Hawaii Five-0 theme] “No! Stop!”

It’s not all fun and games. You’re a scholar of magical theory and there are some serious metaphysical ideas here.

I’ve taken the opportunity to do a few bits of propagandising and a few bits of truth telling. The Real Rap is talking about the fact that we make things real ourselves. One of my favourite bits of wisdom is from Bill Hicks, when he talks about, “It’s just a ride,” and says, “Everything’s brightly coloured… you think it’s real because that’s how powerful our minds are.” As Buckaroo Banzai put it, “No matter where you go, there you are” – you cannot escape from your own identity. They say travel broadens the mind but at the end of it, you’re still there. I’ll probably have to give away the album with copies of my book once I’ve finished it!

What can you tell us about the book?

It’s called The Engineering Of Coincidence and it’s going to be explaining the scientific basis of magic. Everybody who tries to explain magic just ends up with another model. We can’t experience things directly – there’s too much data. We put together a representation in our head and we tell ourselves that’s actually what’s out there, but it’s actually all a model. My explanation is also a model but I’ve tried to make my model consistent and congruent with our current scientific explanation of how the universe is put together.

Now you’ve recorded one solo album, will you do another?

It’s bizarre cos I thought there’ll never be a second one and now I’m beginning to get all these horrible ideas! [Laughs]

Confound And Disturb is out now on Bad Elephant Music. See www.robertramsay.bandcamp.com for more information.