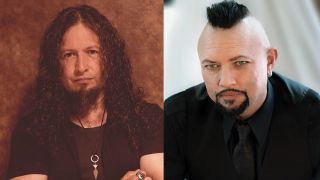 It may be uncomfortable to admit it, but over the last few years, Queensrÿche have become a laughing stock. Releasing albums that lacked the urgency and sparkle of such highlights as Operation: Mindcrime or Empire, their career seemingly plummeted further when singer Geoff Tate was sacked in 2012 after a well-publicised physical confrontation with his bandmates.

That dismissal led to the farce of two acts releasing albums and touring under the Queensrÿche banner, one fronted by Tate and the other by his former bandmates who had employed the capable Todd La Torre as a replacement. An embarrassingly public legal dispute then followed, with the final settlement preventing Tate from using the Queensrÿche name, even if he did retain the sole right to perform both Operation: Mindcrime albums live in their entirety.

Speaking to both parties now, it’s clear that although there remains a lingering, largely unspoken resentment, Queensrÿche and Tate sound weary after the legal contest and are keen to progress with their respective bands. Perhaps predictably, though, Tate – now fronting his own band, inevitably called Operation: Mindcrime – retains a forthright opinion about his removal.

“You’re going to fire the guy that wrote all of the stuff?” he laughs. “It doesn’t make a lot of sense when you look at it. It’s kind of a suicide thing to do. I didn’t understand it at the time and I still don’t. I know it definitely wasn’t creative differences that broke the band apart. It was all a monetary thing and that’s even more disappointing to me. It was a difficult pill for me to swallow. It’s been such a confusing time for our fans trying to decide what they were going to listen to. I’m just really happy that it’s all over now, that we’ve reached a settlement and everybody is going their own way.”

The intention to move forward is a sentiment shared by Queensrÿche guitarist Michael Wilton, who’s patently determined that their Tate-less band will rebuild much-needed credibility and trust with their fan base.

“It really was a difficult time and it’s sad that the drama had to be in the press like that,” he sighs. “Our fans were confused, didn’t know what happened, and then all those legal documents were released. It was just a whirlwind of uncertainty. But we had to weather the storm. It’s not easy touring when there were two Queensrÿches, but we managed to persevere.”

Such a positivity does mask some of the drama that was endured during the last weeks of Tate’s presence, not least the fact that security had to be posted on stage during one gig to prevent the members from assaulting each other. Viewing it in hindsight, it was effectively a hideous, progressive metal version of Jeremy Kyle, and Wilton admits that he still finds it all a touch embarrassing.

“Yeah, it’s kind of silly when you think about it, but honestly, at the time it was necessary,” he explains. “Personally I’m not a fan of reality TV and I’m not about putting personal drama onstage like that. You learn to adapt and deal with certain situations. If you’re professional about things and take the right road, you eventually discard all the debris you have to deal with. Look, corporations do it all the time. They fire the president, shake things up and reinvent themselves. Really, that’s just what we did.”

Tracing the specific point when this once immense band started to decline is difficult, yet both parties do agree that the departure of guitarist Chris DeGarmo in late 1997 was perhaps the pivotal moment when their musical flair began to wane.

“Obviously when Chris left, I think some fans just said: ‘Okay, Promised Land was my last album,’” says Wilton candidly. “A lot of people bought the next few albums but nothing really stuck. As a musician, you’re a hopeless optimist and always believe that it’s going to get better. Finally, when everyone – not just one person – everyone believes it’s just not working any more, you make the move and change is inevitable.”

“When Chris DeGarmo left, that was a huge upheaval and it had to be figured out how we were going to continue on,” says Tate. “I think, after a while, the setbacks can really get to some people. Some people are just set up to focus on the negative rather than the positive. People change and they’re not the same as they were when they were 20 years old. Other things become more important than creating music, like mowing your lawn. But I love almost everything that band did and it’s all part of the big picture. Maybe I was naïve to think the people who you’d worked with shared that same perspective, so it was kind of a shock to find out they didn’t.”

There had apparently also been a shift within the band, with Tate taking more of a leading role in writing and recording. It was a situation that led to outside writers being employed, with the other band members’ contributions being ignored or even performed by outside musicians. It was something that understandably irked the rest of the band, even if Tate still regards it as a necessary action to ensure albums were released.

“Having a band has to be looked at as a business,” he says. “You have commitments that you’ve made, you’ve signed contracts and have deadlines you have to adhere to. If a couple of people in the group aren’t pulling their weight, the company still has to forge ahead. So that’s the mentality of me protecting the band name. In later years, we had to bring in other people to play parts. It was just one of those things that happens with a lot of bands and organisations.”

There had also been a number of seemingly misplaced creative decisions, not least their much mocked Cabaret Tour that saw them sharing the stage with acrobats, drag queens and various scantily clad women, awkwardly cavorting around the band. Surely such appearances can’t have aided their cause?

“Oh, I loved that tour,” laughs Tate after a long pause, chuckling like a Bond villain in a manner that suggests a burning irritation at the impudence of the question. “It was a fun thing to be part of and was a break from what we normally did. It was very successful tour and, artistically, it was a challenge to put something like that together.”

“Well, you look at that and think: ‘Is this the thought-provoking Queensrÿche that we used to be? Was it intelligent and respectful of people, having taste?’ and you go, ‘Whoah…’” counters Wilton. “You learn from mistakes and it’s something not on our horizons that we would ever want to do again, believe me.”

Unquestionably, both acts have been dented by the split, losing credibility and years of hard-earned respect that will take time to repair. Yet there’s an avowed determination to try to rebuild momentum, with both Operation: Mindcrime and Queensrÿche releasing albums in the coming weeks. The latter seem to have returned to a more metal-oriented sound with their Condition Hüman, while Operation: Mindcrime are following Tate’s concept driven approach and releasing The Key, the first album in a trilogy to be released over the coming months. Given his profile, it’s perhaps a surprise that Tate avoided releasing it as a strictly solo album, instead preferring a band name that harks back to his former group’s golden era.

“I needed to have something that had considerable name recognition and the Operation: Mindcrime moniker definitely gives me that,” reasons Tate. “It’s a phrase that’s familiar to fans of my music and also sets the tone for the conceptual work I’m doing. I love creating an album of music that follows a narrative. I’m a collaborative guy and after being in the same band for so many years, it’s a real treat to be able to work with a lot of different people, get their input, their perspective on music and energy. So what I’ve got going now works really well for me.”

As for Queensrÿche, Wilton sounds like a man relishing a freedom away from the creative restrictions he clearly perceives have hampered him over recent years.

“Now we’re firing on all cylinders again, kind of like the old days,” he effuses. “We’re a bunch of guys who are very creative and who were stifled for whatever reason, and it wasn’t a very healthy, creative environment. We now have the freedom again, everybody’s ideas are worked on and there are no outside musicians. It’s really just fun to be together with such a creative bunch of musicians and to see what happens.

“Basically, when you’re in a situation like that, it’s a very dark tunnel. We stayed true to ourselves and I’m not going to say that it was easy. We’re just building again through attrition and it’s a shame that we have to prove ourselves. But believe me, we’re doing it.”

Operation Mindcrime’s The Key is out now on Frontiers. Queensrÿche’s Condition Hüman is out now on Century Media. Visit www.operationmindcrime.com and www.queensrycheofficial.com for more information.