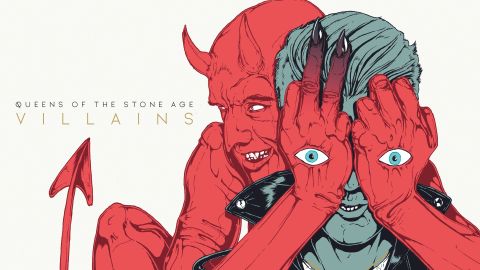 There’s Acid-Faced Jake, who ‘likes those dancing straight boys, make his pupils dilate’. Evil Ol’ Scratch is a real low-life, the kind of guy that drinks water from the gutter. Skinny is the fool of the gang, ‘knowing nothing about nothing is a blessing, in fact’. And you’d best watch K Dub, he’ll ‘give a metal blow job, the middle finger ’n’ split’, apparently. And that’s just the scoundrels inhabiting SOFTWAREmark” gingersoftwareuiphraseguid=“48809fed-edff-42ee-856c-d44b22380c97” id=“731e2843-9130-40bb-a3a1-7fb7eb36054a”>Un-Reborn Again, an ultra-sleazy Telegram Sam roll-calling a host of unsavouryscumbags. Elsewhere there are predatory ghouls, cruel despots and hedonistic outcasts who can’t say no to a crafty shot of Kool-Aid. It’s a ragged crew of villains that lurk within the rock caverns of Queens Of The Stone Age’s seventh album. And my, have they come to party.

Yes, after two decades of burning witches, praising the Mojave sun and worshipping at an altar made of beer empties and licked-clean baggies, Josh Homme is finally dancing with his devils. The man who set the elemental and tempestuous tone of 21st-century rock music over six albums is cutting loose and indulging his love of throwing shapes to uptown funk.

Having worked with James Lavelle on 2013’s brilliantly brooding …Like Clockwork, Homme has ventured even further into the pop swamp for Villains, bringing in producer Mark Ronson (Amy Winehouse, Bruno Mars, Lady Gaga) to help channel the grab-the-moment drive he found in the wake of the terrorist attack on a gig by his other band Eagles Of Death Metal at the Bataclan in 2015. He was absent on the night of the attack, but on stage for the Paris show EODM played three months later. “It affected the way I did everything,” he told Rolling Stone. “It reinforced that you shouldn’t wait to do something or you’ll fucking regret it. Move now.”

Homme moves quickly. After a brief swell of ominous Pink Floyd atmospherics hinting at a far more villainous record than he has actually made, the disco funk beat of Feet Don’t Fail Me kicks in, albeit a disco carved into the tortured landscape of Zabriskie Point. An autobiographical groover tracing Homme’s earliest awakenings to the joys of dancing and how he’s dancing away the woes of the world today, it’s the most upbeat and seductive QOTSA album opener since Feelgood Hit Of The Summer from 2000’s Rated R and it sets a hotstepping tone. The lusty The Way You Used To Do is a rumpshaking glam jive seemingly played on electric fences, and Domesticated Animals is all gritty future blues. It says much about the level of global pessimism in 2017, and Homme’s counterculture kudos, that he makes a dancefloor rock record sound like the ultimate in societal rebellion.

There’s a sincere wish to emulate Beck, T.Rex, Chic or even Franz Ferdinand here, but Homme’s magnetic draw to the arthouse left-field can’t be resisted. To wit, Bowie’s ghost possesses Villains regularly. Seventies Berlin synths and Robert Fripp guitar wonks creep into Feet Don’t Fail Me, and before you know it Homme is in full wuzza-wuzza mode, cranking out his very own Fame. On Domesticated Animals he throws out operatic Thin White Duke wails over a voodoo groove. SOFTWAREmark” gingersoftwareuiphraseguid=“f41ee75a-2748-4f9a-8f20-ef4171116f3c” id=“34ab85ac-6dec-43e1-aac5-51057c8d4042”>Un-Reborn Again – a tribute to the individualistic freedoms of youth in the form of Acid-Faced Jake, K Dub and the gang – morphs over almost seven minutes from Kraftwerk doing Telegram Sam to Ashes To Ashes, a snippet of chamber orchestra akin to ELO’s 10538 Overture and a horn-blasted Diamond Dogs boogie glam climax. No wonder it’s full of such sordid and salacious characters. Likewise the ragged three-minute new-wave punk rampage Head Like A Haunted House, a rabid B-52s, Costello, Stooges and The Rocky Horror Show mash-up that is presumably a side-effect of Homme working with Iggy Pop on his acclaimed 2016 album Post Pop Depression.

Homme’s villains are largely cartoonish rather than authentically sinister, believably evil. Take the camp Candyman who stalks the electro-noir track Hideaway: ‘Speak my name and I’ll appear,’ Homme lilts over the sort of seditious robo romance you’d imagine Lennon might be making today.

Homme considers QOTSA to be a politics-free escape from the modern world, so his references to the Bataclan attack and its causes and consequences are opaque but still present. Fortress comes across as a sci-fi ballad offering comfort and solace to a trouble-besieged friend – ‘If ever your fortress caves, you’re always safe in mine’ – but the most revealing line declares ‘Everyone faces darkness on their own/As I have done, so will you’. More blatantly, the sly slink of Domesticated Animals (that’ll be us, then) disguises a lyric about political suppression in which some dystopian overlord demands their underlings hand over their gold, sends parades of shrunken heads through town and cackles: ‘Kneel and bow, where’s your revolution now?’ It’s trickier to sing ‘Oh Jeremy Corbyn’ to it, but the intent is similar.

Villains, this deep and danceable delight, ends with two searing six minute tracks: the razor-blade blues of the White Stripes-ish The Evil Has Landed, and a sunrise-of-the-ancients pop finalé called Villains Of Circumstance. These are songs that refuse to be crushed, rounding off a disco-rock album determined that the villains won’t win. Bowie’s gone, it says. Trump is here. Move. Now.