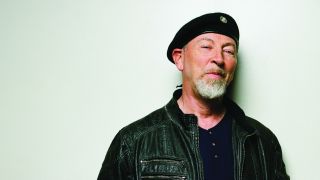 When Prog calls Richard Thompson at home in LA, he’s fresh from the tennis court (not his own, he’s quick to add) and just a little out of puff. Critics frequently serve him up as one of the UK’s finest guitar players and songwriters, but he wears his greatness modestly. After last year’s plugged-in trio album Electric, he’s back with Acoustic Classics – just him, his steel-string and a career-spanning set of songs, the quality of which just shines off the disc. Not bad for an album recorded in a bedroom...

**Acoustic Classics is a lovely album. Was there a grand plan? **

I was just making the kind of record that’s supposed to be for new listeners. I envisaged this being something that goes on the merchandise table at the concerts, for people coming to the show for the first time. I wasn’t expecting it to be much more than that but the record label and my management really liked it, so it seems to have taken on a life of its own. It’s representative of the sort of thing I do at a solo show. I didn’t have anything like it.

That’s surprising given your reputation as an acoustic artist.

It’s economics really. I play two-thirds acoustic shows and a third band shows. I’d prefer it to be a bit more balanced, but it’s having to pay the mortgage, basically. I do have some live solo things but the recording’s a bit scratchy and the performance isn’t quite perfect. Otherwise, I have a lot of band stuff – if you see a solo performance, a lot of what I’m playing would have been recorded in an electric context. This was a niche I hadn’t really filled.

How did you select the songs?

They were all songs I didn’t have acoustic versions of: Wall Of Death, Shoot Out The Lights, I Want To See The Bright Lights Tonight and Walking On A Wire. Linda [Thompson] sang lead on many of these, but I’ve been singing them for so long now, I thought it would be good to have a version of me doing it.

Then there’s 1952 Vincent Black Lightning from Rumor And Sigh, which was solo and acoustic in the first place.

Yeah, but I’ve been playing it live for 20 years now so it gets more streamlined – you change the emphasis on words. For me, songs change every night – the little film that runs in my head runs a little bit differently. And you’re playing to the environment: every audience is different, every room – you might play a big, echoey room or a tight little club, so you play differently.

It must be hard for you to settle on just one recorded version.

In the studio you’re trying to be definitive, and I was fairly pleased with this version [of Vincent], much more than I was with the original recording.

I Misunderstood, from the same album, sounds much more direct in this context. Were you aware of the songs changing?

Yes. I don’t think the original recording quite got it. Everything was so muted, so if you play it on anything but a very large studio monitor system, you don’t hear the drums – we put towels on the drums to record. I prefer the acoustic version. There’s a little bit more tension.

The album has an intimate vibe. Where was it recorded?

In the guest house out the back that I use as a studio. I’m hoping to purpose-build a studio in my house this year – which’ll be a breakthrough – but I record wherever I can. My guest house is just a room. I’ve got two mics on the guitars, one on the voice, I run through a bunch of tube stuff into Pro Tools or whatever it is, and it seems to sound pretty good.

Yes. There’s a bed in it, chairs, enough soft furniture so it doesn’t sound too honky. It’s sort of a Hawaiian-themed room. We inherited it when we moved in and it’s quite something. It’s got these hand-painted murals on the walls; it all dates from the 1930s. It’s an amusing place to be recording. The only thing is I have to contend with yapping dogs.

Did they ruin takes?

Totally. It was frustrating – it was all going well and then some dog starts up in the street. And aeroplanes. We’re under the flight path of LAX, and about 4.30 in the afternoon the planes start coming over with a vengeance. Then there are gardeners using these powered leaf blowers. So it’s all about timing.

It seems so casual, but for a listener, this is a concentrated hit of some of your best songwriting.

I probably get less excited about it because it’s old material. It was actually a struggle to get myself into the studio to do it. I said, ‘I’ve got a great idea, it’ll be on the merch table and you’re gonna love it,’ but it took me three months to actually get in the studio and do it because I thought, ‘Well, this is boring – I play these all the time, where’s the audience to cheer me up?’ But when I did start, I actually really enjoyed it.

Did you have an audience? An engineer at least?

No. I sent it to my sound man Simon Tassano in Texas and he gave it a little more space. Otherwise it was just me.

And you’re doing a long solo tour this summer.

Yes, I’m doing a lot of festivals – Cambridge, Womad, End Of The Road. It’s fun, and it’s easier touring solo, especially logistically. There’s a lot less for me to think about. The nice thing is the communication with the audience, the stillness you can create. If you can get people to lean in and listen, you can have some magical times on stage. It’s great.

Acoustic Classics is out now via Proper Records. For tour dates and more information, go to www.richardthompson-music.com.