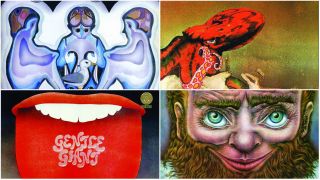 In the latest issue of Prog Magazine, we take a trip to England’s south coast to witness prog legends Gentle Giant being inducted to the Portsmouth Hall Of Fame. To mark the achievement, and to pay tribute to their full and enduringly innovative career, we caught up with some of the biggest names in the prog world to hear how Gentle Giant changed their lives.

“I stumbled upon Gentle Giant through my record collecting in the early 90s. To this day I’ve never heard a band that can compete with them. Not only were they technically amazing but they delivered every note with great feel. It’s quite rare to hear that within complex progressive rock. I think the full ‘classic’ line-up with John Weathers on drums was as close to prog perfection as you can get. The song Peel The Paint is a classic. There’s a section in that song where the violins change modes in a falling melody. That makes me seasick, irritated, amazed. How can you write stuff like that? It’s absolutely stunning!

“I think they started going downhill on The Missing Piece, but prior to that, all the albums are great, and some are outstanding! Prog usually doesn’t have the groove that Gentle Giant had. They had soul.”

“My favourite of the early ones is a draw between Acquiring The Taste and Three Friends, I regretfully must confess! But Three Friends has my all-time favourite Gentle Giant track on it, the title track, because it has that spine-tingling moment in the second half, with vocal harmonies, Mellotron and organ, and an impossible guitar and bass riff that even loses their drummer in the end! That was Malcolm Mortimore, who made just one album with them. It’s a standout in their whole catalogue.

“Their live version of Peel The Paint from Playing The Fool [their 1977 live album] is what made me go back and discover their earlier work. Three Friends was also their first self-produced record. They were in full control, and it shows.”

“You can’t really talk about the British prog scene of the 70s without mentioning Gentle Giant. The first few albums were an eye-opener for a growing underground audience. These were the days of grand creations and individualism being allowed in the music business. Gentle Giant took prog to the extreme, in a way. No other band has displayed such a diverse vision of what can be put into rock music. The truth is, Gentle Giant’s music is probably more folk, classical, burlesque, vocal a cappella and chamber music than it is rock. It was all very elaborate and elevated.

“But all of their albums stand tall alongside the finest of Yes, Genesis or ELP. Gentle Giant were a treat live, too, and I got to see them twice!”

“Gentle Giant are simply unique, with a sound that many – oh yes, guilty as charged! – have tried to mimic or tap into, but no one really comes close. Whether it’s their intricate vocal parts or their complex instrumental workings, it’s theirs and theirs alone. While their music was complicated and sophisticated, they still managed to actually rock out as well, and with a lead singer who could really belt it out! I love Three Friends in particular because I can particularly relate to the concept about three childhood friends who grow apart as they get older due to different circumstances.

“Musically it’s a fantastic album, and although there are many highlights, I would probably pick the place where the epilogue hits in the title track at around 2:25… I’m a sucker for the drama!”

“Gentle Giant were one of many big influences on Tim Smith in Cardiacs so they’re definitely in my DNA too. On the Cruise To The Edge things that I’ve done with Lifesigns, we all became very tight with ‘Three Friends’, the sort-of current version of the band. It features Gary Green and Malcolm Mortimore, who are both salt-of-the-earth geezers. I like them a lot. Malcolm gets the whole punk thing too. He’s mates with Rat Scabies from The Damned! They’re not fussed about the whole prog label. They’re good lads!

“That’s the album that Malcolm Mortimore played on. Did you know he used to be in Kilburn And The High Roads with Ian Dury?”

“We liked Gentle Giant because they were very creative. In some ways their approach to music was similar to ours: they mixed many sounds and languages – classical, jazz and the folk music of their own country… and rock as the glue! At the time of their first three albums, we became friends and we would spend time together during their Italian concerts. They were successful in Italy and both the audiences and the press appreciated them a lot.

“Some of the songs I love most are Funny Ways and Alucard from their first album, and Pantagruel’s Nativity from the second. The Giants were always trying to be creative and innovative. That’s how they surprised their audience.”

“As with all the band’s albums between 1970 and 1976, there’s a constant sense of invention and discovery in the music on the first few, which effortlessly incorporates classical, rock, jazz and R’n’B elements. They brilliantly combined aspects of the past, like the baroque flourishes and the subtle modern jazz quartet touches, the then-present and a taste of things to come, through Gary Green’s wonderfully knotty and echoed guitar parts.

“It’s almost impossible to choose between Three Friends and Acquiring The Taste for me, but due to its unusual concept and the presence of the exquisite Schooldays, my favourite ever Gentle Giant song, Three Friends just about edges it.”

“The first album I heard was The Power And The Glory and I absolutely hated it! [Laughs] But then I bought Acquiring The Taste and that was a lot closer to what I liked. There weren’t so many horns! Gentle Giant used so many interesting sounds to illustrate moments in their songs. They made it sound easy. They never broke a sweat, even when they were playing wildly complicated things. The song I always dug the most was Wreck. I’ve included it in my DJ sets many times. I even suggested it as a cover song, but the other guys laughed at me and said it was a sea shanty! But it’s an incredible song.

“Acquiring… was my first Gentle Giant love. Three Friends is possibly a superior album, objectively speaking, but Acquiring The Taste has a special place in my heart.”

You can read the full story of what happened when Gentle Giant joined the Portsmouth Hall Of Fame in the latest issue of Prog Magazine – on sale now. Buy it directly here or become a TeamRock+ member to read it right now